AT&T and Verizon both introduced Unlimited plans early in 2017, thanks to pressure from T-Mobile and Sprint. The move made sense to prevent a customer exodus, but crowdsourced data suggested that all that video streaming and intensive Instagramming had a negative effect on AT&T and Verizon’s network speeds.

Now, nearly a year after introducing unlimited plans, a new set of data from OpenSignal, that same crowdsourced network analytics company, suggests that AT&T and Verizon are still feeling the effects of those data plans, and average speeds are only just getting back up to the same place they were in at the beginning of 2017.

One graph really explains it all. It shows the average LTE download speed on all four big networks over the course of last year. The thing to focus on here isn’t which carrier is notionally the “fastest” — there’s too many variables involved in crowdsourced testing to make those arguments — but rather the trend of what happened over the course of the year. After AT&T and Verizon introduced unlimited plans in February, the average LTE download speed takes a distinct dip. 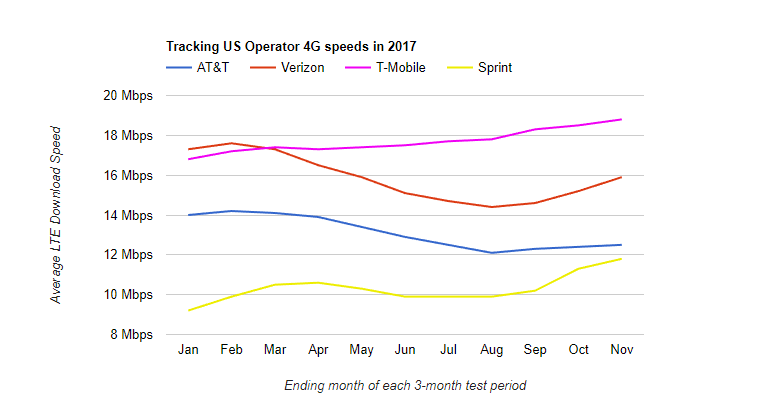 Now sure, we can’t say with certainty that the change in the results is absolutely due to customers streaming more video thanks to unlimited plans, but the theory certainly makes a lot of sense. At the time, Verizon’s VP of network support Mike Haberman told me that the data from Ookla and OpenSignal “doesn’t line up at all with what I see,” and the company publicly says that its network is “as strong as ever.”

But according to OpenSignal’s data, which is based on millions of real-world customer tests, Verizon’s speeds did take a hit, and the decrease in performance would be consistent with network congestion. Assuming that that’s what actually happened, OpenSignal’s new data shows that Verizon and AT&T are only just now recovering. Speeds for both networks have been rising for the last three months, and are now nearly back to where they were at the beginning of 2017.

OpenSignal’s data shows T-Mobile as being on top for 2017 in average speeds, although as we’ve explained before, using one set of data to call a particular network the “best” doesn’t hold up. Network quality is a component of both coverage and speed, as fast LTE downloads don’t really help when you don’t have a signal at all. But whether or not you agree with OpenSignal’s rankings of best or fastest network, the trend for 2017 — downwards in the case of Verizon and AT&T — is a little worrying.