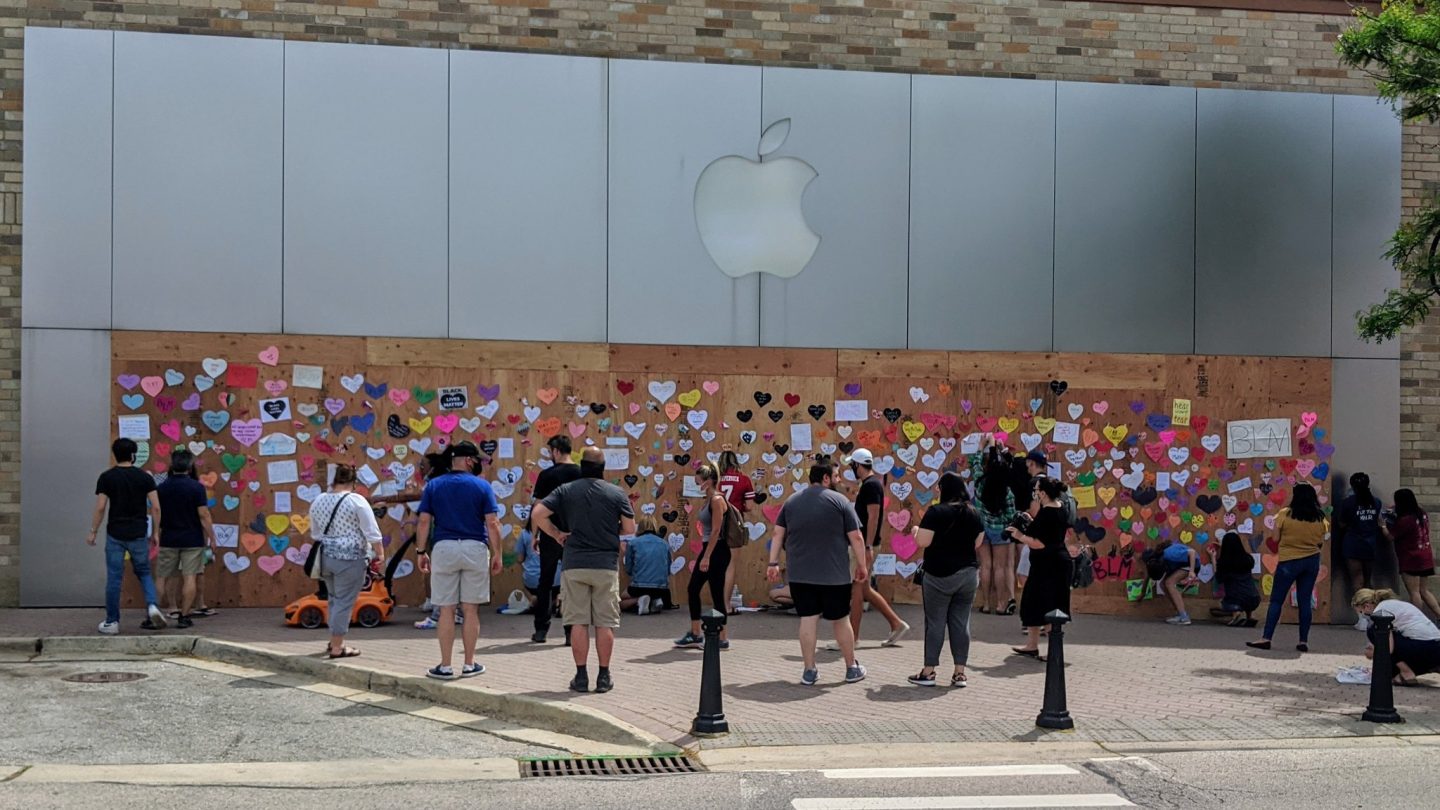 In recent days, Apple was among the major retailers in the US that closed most of its reopened retail stores in light of the George Floyd-inspired protests that resulted in property destruction in some cities around the country. The iPhone maker — whose CEO Tim Cook has penned a new open letter about “speaking up on racism,” available on Apple’s homepage — proceeded to board up stores to prevent looting, which had a perhaps unintended consequence:

The boards turned into a magnet for messages from protestors, from community members, and for anyone who just has something to say about the Black Lives Matter movement and, specifically, the death of Floyd at the hands of Minneapolis police.

“At Apple,” Cook writes in his letter, “our mission has been and always will be to create technology that empowers people to change the world for the better. We’ve always drawn strength from diversity, welcomed people from every walk of life to our stores around the world, and strived to build an Apple that is inclusive of everyone.”

Along those lines, you can see below the product of some of the messages left at Apple stores around the country — with the messages running the gamut from post-its to the creations of artists who’ve been inspired to say something right now:

My local @Apple store, boarded up to protect from looters but creating a canvas for #peaceful #protest~#PaloAlto #GeorgeFloyd #BlackLivesMatter pic.twitter.com/KOh3ym7HaG

The closure of the Apple store near where I live certainly stood out when its striking glass storefront was covered up by black paneling ahead of rumored protests here. Some Apple stores have been targeted by looters, including the Carnegie Library location at Mount Vernon Square, the history of which includes the fact that it was the first desegregated public building in Washington DC.

In an Instagram post, Apple’s senior vice president of Retail + People Deirdre O’Brien wrote that Apple stands with “the black community and all of our black colleagues. You matter, your lives matter, and you are valued here at Apple.” Cook has previously announced donations from Apple to groups like the Equal Justice Initiative.

And the conclusion of Cook’s just-published new letter on racism reads: “In the words of Martin Luther King, ‘Every society has its protectors of status quo and its fraternities of the indifferent who are notorious for sleeping through revolutions. Today, our very survival depends on our ability to stay awake, to adjust to new ideas, to remain vigilant, and to face the challenge of change.’

“With every breath we take, we must commit to being that change, and to creating a better, more just world for everyone.”