Best Rust Remover for Around the House – BGR
Click to Skip Ad
Closing in...
Deals

Best Rust Remover for Around the House

Metal and steel are things that are in more of our household items than we realize. A lot of your car is made up of it. Your computer has a ton of it too. While we aren’t walking around using metal detectors in our everyday lives, it’s pretty easy to find the metal in your house. If you’ve had it a long time, it’s probably starting to rust a bit. Rust is unsightly and really can be an eyesore, especially if it’s in an area of your home that you or your guests frequent. Get rid of the rust with rust remover. This attacks rust at the source and gets rid of it to make your items look brand new. There are many different ways to combat against rust and we’ve handpicked our favorites among the bunch. Take a peek at our choices below and go back to not thinking about how your metal objects look.

Rust remover comes in many different forms, like the Evapo-Rust The Original Super Safe Rust Remover. This gallon bottle of rust remover is environmentally safe and the remover is a water-based product that removes rust in minutes. You won’t have to sand or scrub the metal in order to get the rust off. You’ll just have to leave it with the Evapo-Rust. It is non-toxic and biodegradable, as well as non-corrosive. There are no fumes or bad odors when you’re using it and it’s safe on your skin and eyes. You won’t have to wear any protection when you’re using it and it even won’t harm steel that isn’t rusted. This is perfect to be used on cast iron cookware, grills, grates, antiques, tools, auto parts, clocks, sewing components, or even toys. This gallon bottle can be used to de-rust up to 300 pounds of steel. You’ll be able to get a lot of use out of the bottle and it doesn’t go bad, so you can store it for when you do need it.

If you want to be able to target a specific area that needs to have its rust removed, then pick up a spray bottle of the IRON out Rust Stain Remover Spray Gel. This comes in a 16 oz. bottle with a spray top that allows you to dispense it acutely. This is made in the United States and is the number one heavy-duty rust remover spray brand. The gel is powerful and it clings to dissolve stains on contact. You won’t have to scrub it at all, which is helpful if you’re seeing rust pop up in your shower, sink or anywhere else in your bathroom. Nobody wants to scrub more of their bathroom than they already have to. It is ideal for vertical surfaces and hard to reach ones, as it will run downward and cling to the stains. This will quickly and easily remove the toughest stains from most surfaces in and around your house. This versatile liquid formula works on carpet or fabric, tile, concrete and many other exterior and interior surfaces. You can buy this in a bottle of just one or you can choose between a two-pack, three-pack, or four-pack. 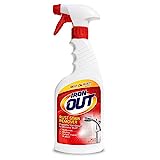 Best Can of Rust Remover

Carrying with it a trusted name in rust removal, the Rust-Oleum Automotive Rust Reformer Spray is a great choice for your car. This will instantly convert rust into a protected and paintable surface. If you’re struggling to restore an older vehicle, using this rust reformer spray will make it a lot easier. Now you don’t have to worry about sanding or buffing away any of the rust seen on the fenders, sides or in the grill of the car. This also prevents future rust from forming. It instantly bonds with the rust and transforms it, taking out a lot of the hard work you may have previously worried about. This can holds 10.25 ounces of spray and the tip allows you to spray at any angle. You won’t have to press too hard to make it come out, as the spray tip is comfortable. While you’re spraying, it’s best to keep the can in motion and rotate back and forth with slightly overlapping strokes of spray. 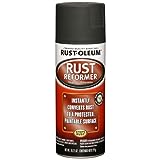 Tweet
Finally: One tiny adapter can fast-charge your MacBook and iPhone at the same time, and it’s $8 off

How the heck are AirPods Pro back down to Black Friday’s price at Amazon?