One of the best parts of every summer is going to barbecues and cookouts. Smelling those meats cooking and standing there and watching the meat sizzle while you’re keeping the grillmaster company is only made better by knowing that you’ll eventually get to eat it. All the salads, chicken, barbecue and vegetables that you cook up are tastier in the summer but sometimes, they can be a real mess. Licking your fingers is not acceptable in public and using up a ton of napkins is awkward if you’re at somebody else’s house. Obviously, a sloppy joe is known to be sloppy and fajitas can spill all over the place. But there is hope as there are pieces of kitchen equipment that make eating even easier. Rather than having your hands covered in butter, sauce, or crumbles, you can use any of these specific devices to ease into your meal and not look like a pig. Let’s take a look.

Corn on the cob is one of the best things you can enjoy during a cookout. But it isn’t always the easiest thing to eat. Holding a cob on one end between two fingers because it is piping hot does not seem ideal and when it’s covered in butter, it’s super slippery to grab. But with the ZYLISS Corn Holders, you can enjoy your corn as it was meant to be eaten. These cheerful corn holders come in different colors that are all bright. Each one has a two-pronged design, so you can stick it into each end of your corn for clean eating. It firmly attaches to the corn and it won’t slip as you’re mowing through your cob. Storing it is easy because, in the middle of each holder, there is a hole that allows you to plug another one into it to keep them together. It’s all about safety and convenience when it comes to these. They are made from rust-proof construction and are dishwasher safe. It comes with four pairs, so you’ll be able to offer some to your whole family.

It’s no secret that everybody loves to enjoy their food. But what if we told you there was a way to enjoy your food and have fun dinosaurs on your table? Sounds crazy, right? Well, the Barbuzzo Tacosaurus Rex Taco Holder is just an awesome addition to any table. This Tacosaurus Rex can hold two hardshell tacos and keep them together as you’re getting ready to eat them. It’s made for children and adults alike, because if you’re a dinosaur lover, you’re going to want these. This is a great purchase if you have children who are picky eaters, as it’ll make eating fun for them. But it also is just a convenient taco serving tray, as it’ll update and bring your Taco Tuesday to the next level. It’s a great gift for anybody in your life and we seriously mean anybody. It’s completely safe to use, as it’s 100% BPA-free. The best part about this is it can also hold things like crackers, waffles, sandwiches, nachos, paninis, pizza roll-ups, burritos, cheese flautas and a ton of other snacks. It’s also offered in the TriceraTACO and NachoSAURUS to complete your Mexican feasts. 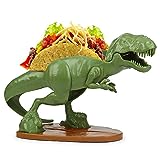 A top way to prepare a meal is to roast and then pull meats. When you’re shredding your food, you can use two forks, but the tines often times get clogged with the food, which slows down the preparation. But if you had the Original Bear Paws Shredder Claws, you wouldn’t have to worry about that. These are the answer for perfectly shredded meat without having to use a knife or fork. They are called shredder claws because they resemble bear claws. There is an area for your hands and you can slide them in and point the claws downward to attack the meat. Perfect for chicken, beef or pork, you’ll be able to lift, handle and pull the meat without any hassle. It’s super easy to manage and you won’t be hurting yourself with the sharp blades. They are heat resistant up to 475°F, so you don’t have to worry about melting them near a grill. They are BPA-free and FDA-approved, meaning they’re safe for your kitchen. These are a favorite of professional barbecue pitmasters and they are 100% made in the United States.

Amazon is blowing out VitaCup coffee and tea pods infused with MCT oil and more, today only

This 65″ 4K Roku TV is so cheap on Amazon right now, it seems like someone screwed up