Precision and perfection in the kitchen starts with the right equipment. In order to nail the recipe on the first try, (I mean, who has the time to make something more than once?) you’ll need proper measuring instruments and a liquid measuring cup is a must. Coupled with dry measuring cups and spoons, a liquid measuring cup makes it easy to measure ingredients, especially liquid ones (obviously). Mixing up batters for cakes or homemade waffles is made simple when you can see how much you’re actually distributing. If you don’t want to seem like a novice in the kitchen, even if you are one, you should check out any of these three liquid measuring cups before you start mixing.

Pyrex is known for intricate but sturdy glasswork and its four pack measuring cup set holds up to that tradition. You’ll get four cups that’ll give you a ton of measuring capacity, as they hold one cup, two cups, four cups and eight cups respectively. These are made with nonporous glass that won’t absorb odors, stain or warp. It is preheated glass, so it works fine in the microwave, oven or freezer and it can be washed in the dishwasher. One side of the cup has milliliter measurements and the other has cups and ounces, so you’re covered with anything a recipe will call for. They can also be stacked inside each other to make storing them simple. 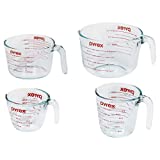 For those who don’t want to own glass measuring cups, there’s the OXO Good Grips 3-Piece Angled Measuring Cup Set. With its angled designs, you can read the measurements from above, rather than having to fill a little, stop, check and repeat. There are standard and metric markings, giving you precise measurements each time. These are made from BPA-free plastic and are dishwasher safe, as the set comes with a one-cup measuring cup, as well as one that measures two cups, and one that fills four cups. The non-slip handle is soft and comfortable to hold with one hand. 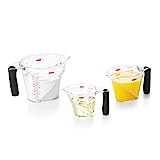 If you’re just looking for one measuring cup, then do yourself a favor and pick up the Rubbermaid Commercial Products Bouncer Measuring Cup. It is made of break-resistant polycarbonate and measures 4″ x 2.75″ x 3.25″. The red markings on the side are measurements in cups and ounces and the blue measurements on the other side are measurements in milliliters, making them easy to decipher. It can be placed in temperatures as low as -40°F or as high as 212°F. The handle won’t get hot if the cup is heated. 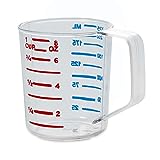 Available from Amazon
BGR may receive a commission
Buy Now
Tags: BGR Amazon Deals
The wireless camera that lets your smartphone see anywhere is back on sale for just $29