NASA’s New Horizons spacecraft has been speeding through space since early 2006 and it’s about to make what might be its most interesting flyby to date. After speeding past Jupiter and Pluto in the 12 years since its launch, the probe is about to have a very close encounter with a mysterious object in the outer Solar System called Ultima Thule. As luck would have it, it’s going to meet its target on New Year’s Day, and it’s a pretty big deal for NASA.

As we approach the probe’s arrival at Ultima Thule, NASA is announcing its schedule of events related to the probe’s flyby. The big show will begin on the afternoon of Monday, December 31st, and it’ll kick off three days of news and briefings that will give us our best look yet at an extremely distant Solar System object.

Here’s the schedule of events that NASA has planned: 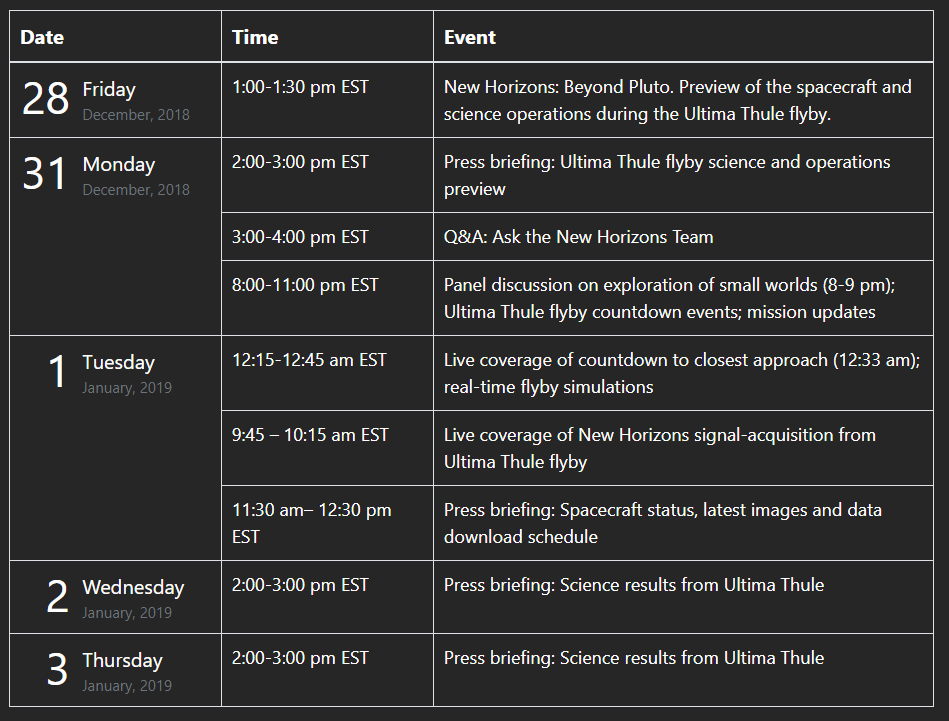 As you can see, anyone who is staying up for the big ball to drop and kick off the new year on the East Coast will only have to wait a little while to catch live coverage of the New Horizons spacecraft’s close approach to Ultima Thule. NASA will provide simulations of the flyby happening in real-time, but since a live feed from the spacecraft just isn’t possible we’ll have to wait a little while to see the actual images the probe captures.

Later on New Years Day NASA will broadcast the signal acquisition from New Horizons, confirming that it gathered the data it was instructed to and building up some serious hype for the eventual reveal of the first images of the distant object. At 11:30 a.m. EST, NASA will hold a press briefing to show off whatever images and information the spacecraft has managed to send back, but that will really only be the tip of the iceberg for scientists.

In the months to come, New Horizons will beam back a wealth of data that won’t be available on day one. NASA will announced a”data download schedule” that will give us all a better sense of when to expect even more news about Ultima Thule.