You’d think that the nation’s lawmakers — the ones with the power to decide how the country spends its billions, when we go to war and who with, and all the other secrets and intricacies of running the most powerful nation in the world — would have at least a minimal understanding of how Google works. You’d be wrong.

That was clear during testimony today in front of the House Judiciary Committee by Google CEO Sundar Pichai, who was grilled on everything from China to privacy to search result bias. At one point, Democratic Congresswoman Zoe Lofgren, who represents the California district that includes Google’s home in Mountain View, brought up Donald Trump and his relation to a certain quirk of Google’s search engine.

Why, she wanted to know, is the 45th president of the United States the man whose face you see over and over after you perform a Google image search for the word “idiot”? Why are you presented with a results page that has Donald Trump’s face all over it? That’s still true at the time of this writing. 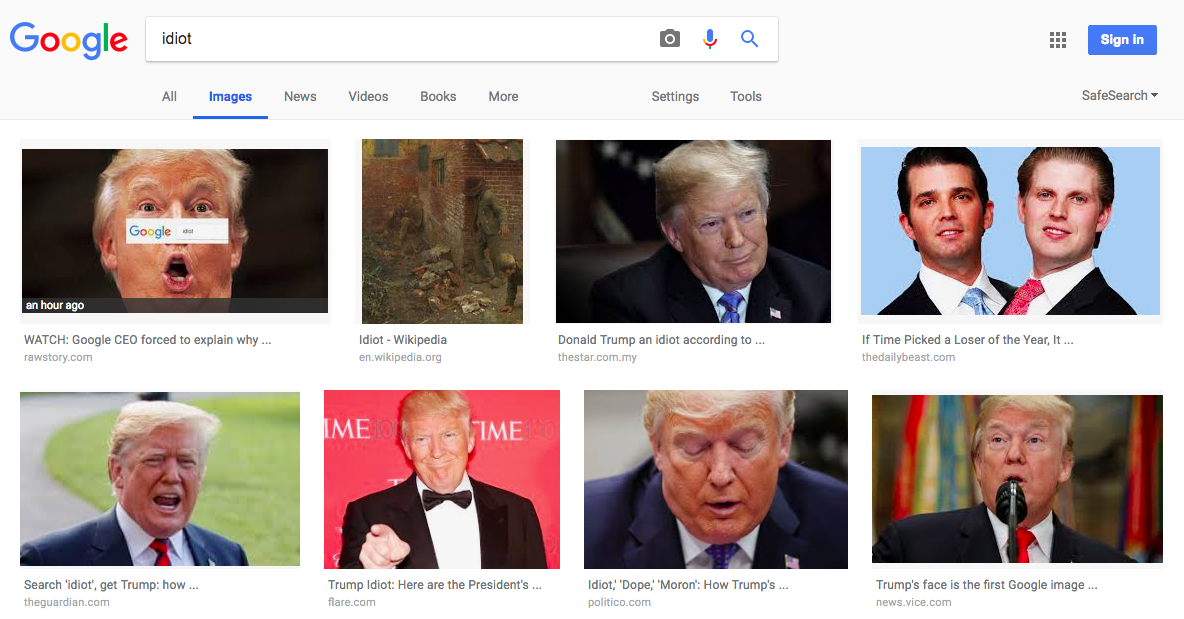 Of course, to answer that question, Google’s CEO had to explain how algorithms work.

“We provide search today for any time you type in a key word, we as Google, we have crawled and stored copies of billions of web pages in our index,” Pichai said. “We take the keyword and match it against web pages and rank them based on over 200 signals. Things like relevance, freshness, popularity, how other people are using it, and based on that, at any given time we try to rank and find the best results for that query. Then we evaluate them with external raters, to make sure, and they evaluate it to objective guidelines, and that’s how we make sure the process is working.”

It’s not somebody pulling a lever every time a search is queried, obviously. It’s a machine-driven process that happens lightning-fast, driven by scores of inputs that computers process to deliver hopefully objective results. News stories and blog posts like this one, in other words, are going to ensure that Trump stays a top search result whenever someone queries Google images for the word ‘idiot.’

Lofgren responded to Pichai’s explanation with this: “So it’s not some little man sitting behind the curtain figuring out what we’re going to show the user, it’s basically a compilation of what users are generating and trying to sort through that information.” Apparently resisting the urge to agree that there’s no ‘little man,’ Pichai went on to note that Google last year served over 3 trillion searches, a large percentage of which Google has never seen before.

Nevertheless, given the hyper-partisan nature of politics today, Google will no doubt have to keep giving a version of this explanation over and over again. At another point during today’s hearing, for example, Ohio Republican Steve Chabot said “I don’t know if I buy that,” referring to Google’s explanation of how algorithms drive search results. His reasoning? He had to go deep into several pages of search results to find what he decided was positive news coverage of the Republican bill to repeal the Affordable Care Act.