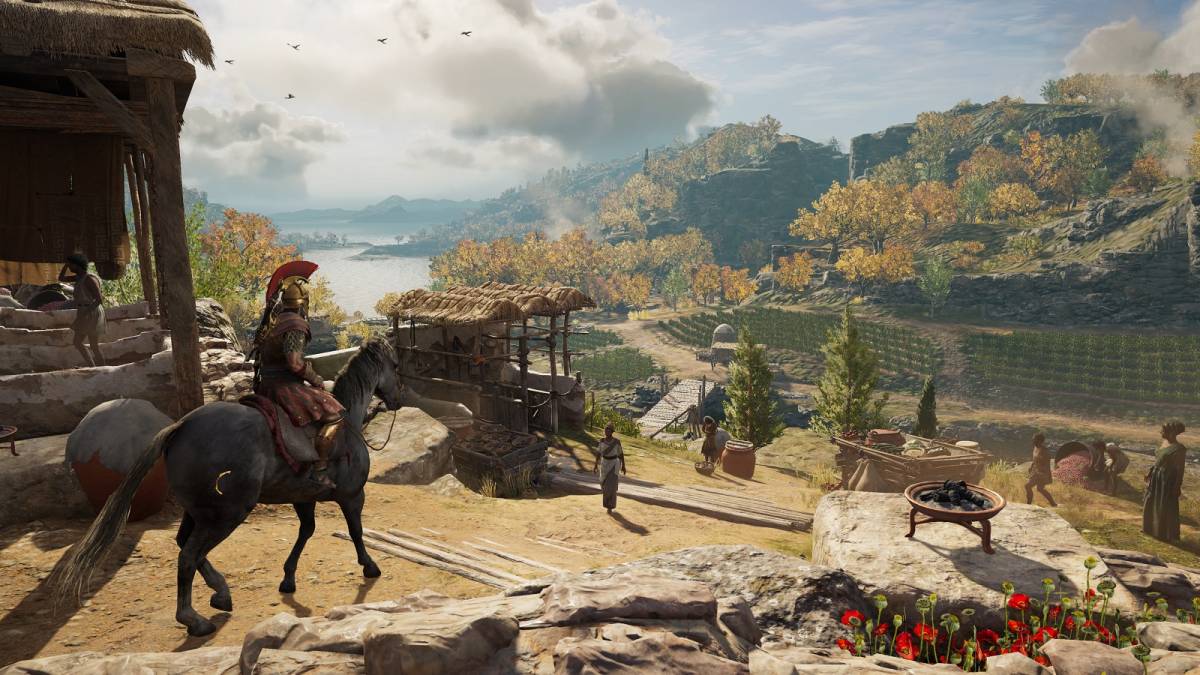 When Ubisoft announced that it would be returning to the Assassin’s Creed franchise just a year after Origins came out, I was initially skeptical. Origins succeeded in part because Ubisoft took the time to truly evolve the gameplay for the first time in a decade, but Odyssey, its follow-up, appeared to be little more than a reskin of Origins.

After playing through four hours of the game last week, I am happy to report that my assumptions were incorrect, and while Odyssey may have been built on the same foundation as Origins, the changes are enough to truly differentiate it, and it succeeds in pushing the franchise forward in countless ways both big and small.

If you’ve read or seen anything about Assassin’s Creed Odyssey before now, you know that this is the first game in franchise history to allow the player to choose between a male and a female character at the outset. Your choice is between siblings Alexios and Kassandra, children of a great Spartan mercenary named Nikolaos.

I chose to play as Alexios for my demo session. After a short tutorial explaining the controls (which are in many ways identical to those of Origins), the story began with Alexios waking up in his small home to the sound of a ruckus being made out front. Two angry men were waiting for me, demanding I pay back my debt to “the Cyclops.” When I refused, a fight broke out. After dispatching the two thugs, a young girl named Phoibe showed up, telling me that Markos was looking for me. This was when the game began in earnest and I was free to begin running around.

When I arrived at his newly-minted vineyard, Markos informed me that he didn’t have the money he owed me. In fact, he had spent it all and borrowed even more from the Cyclops (a cruel nickname for a local criminal who lost an eye, not the mythical creature). This started a string of quests that took me from one end of Kephallonia to the other as I tried (and failed) to get Markos out of trouble without having to resort to violence. Along the way, I made choices that seemed to have real consequences on the way the story played out. What if I had demanded that a shopkeep give me the money he owed Markos rather than let him off the hook? What if I had been less forgiving of Markos from the outset? The fact that someone else will find out when the game comes out next month is exciting.

Having since returned to Origins to refresh my memory, I was shocked to discover how much less cinematic the 2017 title is than Odyssey. In Odyssey, the camera focuses in on characters when they speak to one another, cutting back and forth as they converse and giving the player time to react when a dialogue choice needs to be made. In Origins, the camera stays over Bayek as he accepts a quest, and I found myself far more inclined to skip the discussion entirely. It’s a minor point, but Odyssey simply works harder to keep the player engaged. 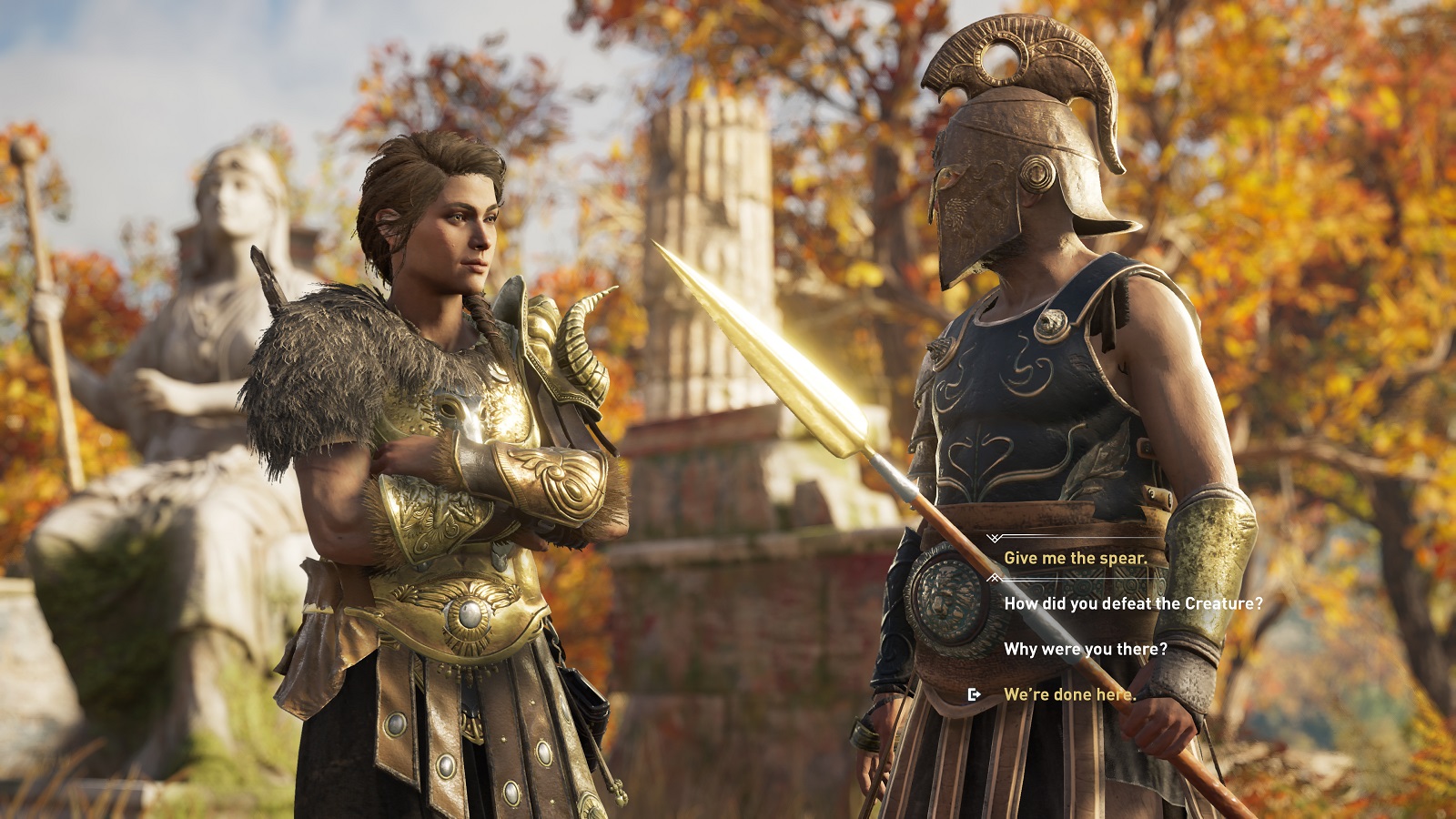 More impressive though are the adjustments the team made to the combat system. At a glance, enemy encounters don’t appear to be significantly different than they were in Origins, but Odyssey dumps shields in favor of counters, which are far more fluid and satisfying to pull off than blocks ever were. No matter how difficult an encounter became (and rushing through missions that I was slightly underleveled for, some were very tough), I was confident that I could come out on top if I paid attention to enemy attack patterns and executed attacks, dodges and counters at the right time. I was finally getting comfortable with the system by the end of my session, but having jumped back into Origins in the days since, I can’t stress enough how much more fun it is to do battle in Odyssey.

Speaking of battles, none were more thrilling than the one against a mercenary who had been sent to take me out. You can see the fight in the second half of the video above, but that was my third or fourth attempt to survive against the overpowered mercenary. The mercenary system works a bit like the wanted level in Grand Theft Auto, and the more chaos you cause, the more likely someone is to hire a sellsword to end you.

Perhaps the most substantial new feature in Odyssey though is the dialogue system, which allows you to decide how you want to approach any given mission or conversation. Want to be a gracious, patient mercenary who spares the innocent and gives the upper class all that they can handle? Go for it. Want to treat everyone like dirt and make enemies all over Greece? Do it. Prefer to pretend you’re an infallible god? That’s an option too.

Although I didn’t have the opportunity to try it out myself, you can also romance non-player characters you meet as you travel through Greece, adding another layer to the role-playing systems that will take center stage in Odyssey. I can’t say whether or not the RPG elements will stay fresh for the entire campaign, but I walked away anxious to see more of what the Greek world of Odyssey has to offer. 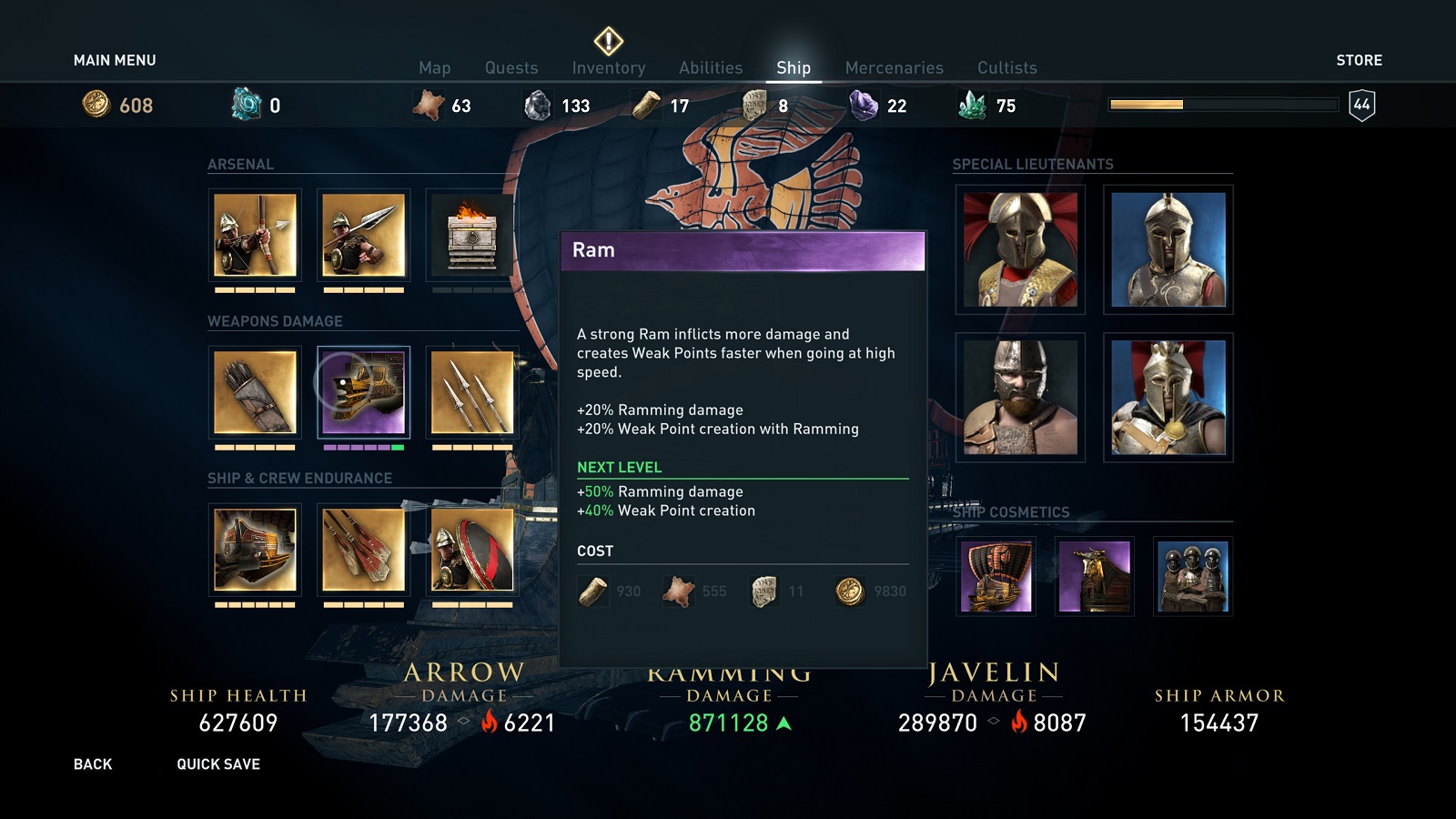 After visiting the Cyclops and finally paying off Markos’s debt once and for all, Alexios was ready to leave his home of Kephallonia for the shores of Megaris, where the Spartans and Athenians were battling for control. The encounter with the Cyclops just so happened to end with Alexios saving the life of a sea captain, and not wanting to anger the gods, he agreed to lend Alexios his boat and his crew for the dangerous journey ahead.

This was my introduction to naval combat in Odyssey, which should be familiar to anyone who played Black Flag. While Origins had several missions which involved naval combat, sailing and ship battles are accessible in the open world in Odyssey. Once we departed Kephallonia, I was immediately set loose in the open sea, free to explore to my heart’s content (once I finished a short naval battle tutorial mission).

Four hours later, Assassin’s Creed Odyssey had gone from a likely backlog candidate in a busy holiday season to my most anticipated Assassin’s Creed game in years. The dialogue options keep you engaged in a story that will become uniquely your own, the additions to the combat system make fights more interesting, and the return of freeform sailing is a welcome one. I can’t remember the last time I was genuinely looking forward to yet another Assassin’s Creed game, but Odyssey might be the entry that brings me back into the fold.