It’s no secret that Google likes to have a bit of fun. From the revolving door of artistic doodles that grace Google’s homepage to the company’s extensive April Fools Day pranks, Google, more so than most other tech companies, likes to instill a bit of whimsy across much of its software.

Nowhere is this more apparent than on Google’s homepage. Now Google’s homepage is purposefully sparse as the company wants users to quickly enter in a query and find what they’re looking for. But lurking underneath the surface are a number of awesome Easter eggs that allows users to play all sorts of interesting games right within the browser itself.

Here are a few of our favorites.

If you do a Google Image search for “Atari Breakout”, your screen will magically transform into an old-school video game console and will let you play Atari’s iconic 1972 game. Interestingly enough, the game was actually designed in-part by Steve Jobs and Steve Wozniak.

In keeping with the old-school video game theme, you can play Pac-Man within your browser simply by doing a Google search for “Pac-Man.” From there, a Pac-Man screen will pop up and you simply need to hit “Click to Play” and you’ll be well on your way. The controls, naturally, are mapped to the arrow keys. 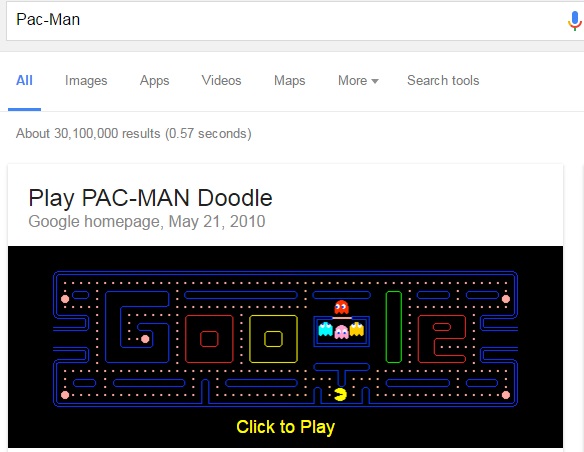 Another cool Google Easter egg lets you have fun with some dice. Simply type in “Roll a die” and you’ll see a six-sided die appear that you can roll with the click of a button.

Make sure to hit the source link below for other games Google has hidden across some of its other products, including some fun ones in Google Earth and on Android.