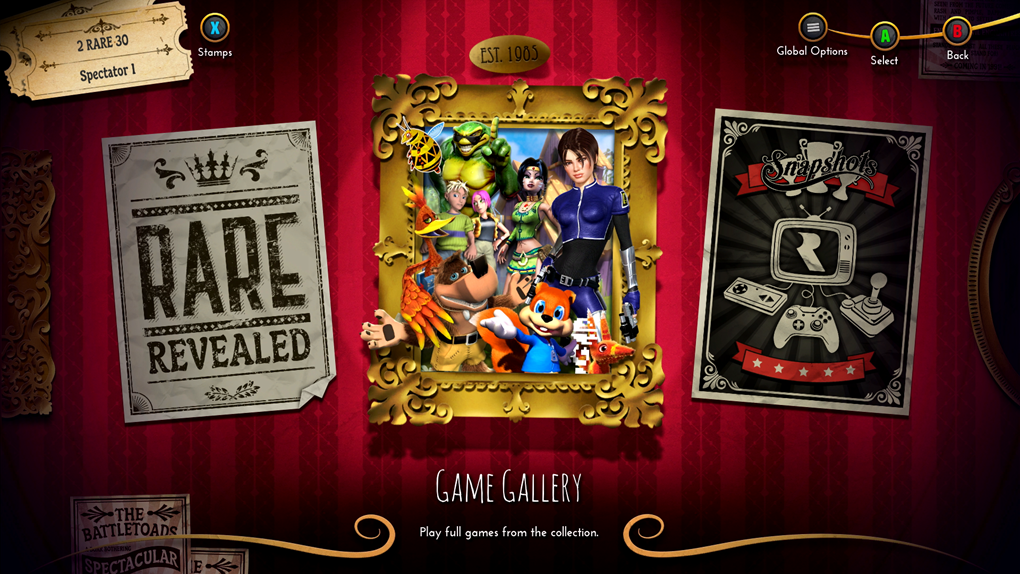 When I was young, I didn’t pay attention to the names of the developers on the boxes of my favorite games. I just loved playing good games. It would be years before I took an interest in the industry as a whole, but looking back, nearly every game I played in my formative years had the same name on the box: Rare.

The reason that everyone has been so defensive about Rare’s output over the past several years is because many of us grew up on the studio’s games. Donkey Kong Country, Banjo-Kazooie, GoldenEye 007 — Rare’s stable was inescapable for a Nintendo fan in the 1990s.

Decades later, we now have an opportunity to revisit many of those seminal classics, while younger generations are able to uncover them for the very first time with the Xbox One exclusive Rare Replay — a collection of 30 games from the past 30 years.

MORE GAMING: 3 huge ways the Xbox One just showed up the PS4

My first impression was somewhere on the spectrum of confusion, because despite the fact that Rare Replay is a full retail game on a disc, you have to install it in parts. 21 games are playable straight from the Rare Replay app itself, but 9 others (each of which are Xbox 360 titles) require separate installs. It’s a foreign concept, so it caught me off guard, but once everything is installed, it runs (relatively) seamlessly through the main Rare Replay menu.

The games themselves are of varying quality, both in terms of the job Rare did porting them to the Xbox One and how well they hold up in 2015. I was overwhelming pleased with the package as a whole, but I noticed some unwelcome slowdown in Perfect Dark Zero and Viva Piñata. Technical difficulties aren’t exactly unheard of in regards to ports, but it was slightly disappointing.

As for the actual games included in the collection — there may be a few clunkers, but I could see myself spending the next two months rediscovering the games that ate up countless hour of my childhood. Banjo-Kazooie (and its sequel), Perfect Dark and Blast Corps hold up phenomenally well, although I’m sure the sense of nostalgia isn’t hindering my opinion of these games either.

That said, Viva Piñata, a game that I only ever watched a friend play nearly a decade ago, still felt fresh as I began to grow my own garden for the very first time. There’s a timelessness that seems to be inherent in Rare’s game design.

The significantly older ZX Spectrum games are much more hit-and-miss than the N64 and Xbox 360 titles, but there are some gems worth brushing off, especially if, like me, you haven’t actually ever played them. Battletoads, for example, is a game I may very well have tried when I was a kid, but I can’t remember it. Being able to sit down and play it on my Xbox One is a real treat.

Other games are more difficult to grasp, like Underwurlde and Knight Lore. They’re difficult to control, run sluggishly on the Xbox One and have poorly defined objectives. For history’s sake, it’s worth testing out every game on the disc, but you’ll known fairly quickly whether or not you could spend any significant amount of time with one of the old school titles.

Earlier this year, The Witcher 3 set an impossibly high bar for future open world RPGs. If they can’t reach that level of detail and retain the same quality of storytelling from start to finish, we’re going to notice.

The same is true of this collection.

The next time a studio releases a collection of two or three remastered games for $59.99, we’re going to be left scratching our heads. To say that Rare Replay is a great value is to undersell the insanity of its dollar-a-game pricing scheme. There are countless fans of these franchises that would happily pay $5 to $10 for each and every game on this disc, but they’ll never have to, because Rare and Microsoft made a conscious decision to redefine the pricing model.

There are kinks that need to be worked out and games that don’t hold up in 2015, but taken as a whole, the Rare Replay collection is the best of its kind.

Microsoft provided BGR with a copy of Rare Replay on the Xbox One for this review.