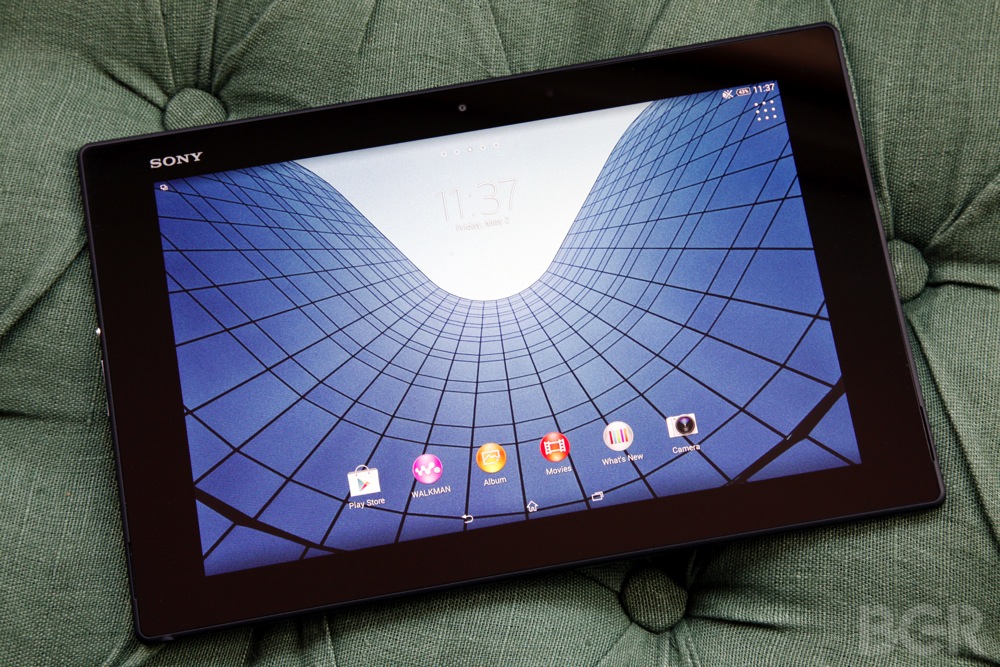 When it comes to the tablet market, Sony seems to be stuck in neutral. We previewed the Xperia Tablet Z over a year ago to find that Sony hadn’t yet found an angle for its lineup, resulting in an unremarkable device priced far above its more enticing competition. A year later, Sony is making a bold bet with the Xperia Z2 Tablet — it bet that it can go head to head with Apple’s market-leading iPad Air.

There’s plenty to like about the Xperia Z2 Tablet, but each of the strengths comes with an asterisk. For example, the TRILUMINOS 10.1-inch display is bright and responsive, yet the picture quality seemed a little dicey when watching YouTube videos or clips on the Sony’s Video Unlimited service. The sound is equally impressive, emitting enough volume to pierce through the ambient noise of New York outside of my apartment, but it was far from crystal clear. Depending on how you use your tablet, speaker sound quality might not be a deal breaker — that said, you’re probably going to need headphones to get the most out of the tablet.

The design of the Xperia Z2 Tablet is one of the few areas where I don’t have any complaints. Sony’s 10.1-inch tablet is as ridiculously light as the press copy claims it is, giving your wrists a well deserved break from the bulky tabs being sold by other manufacturers.

Keeping the device as slick as it is led to some interesting compromises. Rather than displaying the ports on the edges of the device, the USB port and the microSD card slot are hidden behind plastic flaps. The flaps were surprisingly difficult to locate, and once I found them, I wasn’t thrilled with the plastic dangling off my device every time I wanted to charge it.

Speaking of which, battery life is another highlight of the Z2 Tablet. I turned on the device the moment it arrived, without charging it, and after watching videos, playing games and browsing the Internet for hours, it still hasn’t needed to be plugged in. The 6000 mAh battery is meant to last up for to 10 hours of nonstop multimedia use, 100 hours playing music and even longer on standby. You’re going to have to work this thing hard to kill it before the end of your flight.

Sony’s tablet also fully capable of sitting in your shower or on the edge of the pool without any cause for alarm thanks to its IP55/IP58 water and dust proof rating. The durability of a device this powerful is undeniably impressive. Unfortunately, the potential portability that its durability offers is slightly hampered by the fact that the display is almost entirely unusable in sunlight. After attempting to take a few photos of the tablet outdoors, I was forced to give up and try again inside. If you were planning on bringing the tablet to the park on a sunny day to finish that book you started, you might want to pack a sunbrella as well.

The double whammy of standard Android apps and Sony’s own proprietary apps preinstalled on the tablet was a bit overwhelming. As far as junkware goes, Sony is relatively inoffensive, offering plenty of worthwhile apps along with the requisite clunkers, but as with any Android tablet, you might have to do a bit of clearing out before you settle on which apps you’ll actually end up sticking to the home screen.

Tablets aren’t meant for photographers, but Sony’s 8-megapixel rear camera will do in a pinch. I took a few photos to test the quality, and although I wasn’t surprised with the results, I wasn’t underwhelmed either. If the Xperia Z2 Tablet is the only device within reach when there’s something worth photographing, you’ll be left with an image worthy of a slideshow or your Facebook news feed.

I don’t know if Sony is looking for suggestions, but at $500, I don’t know which segment of the market this tablet is aiming for. If this were a more affordable device, it could be marketed as the most portable tablet for consumers living an active lifestyle. Unfortunately, no one wants to bring a high-end, $500 device on a white water rafting excursion. By aiming for the top of the market, Sony has limited its audience and positioned a functional, ultra-portable device against Apple’s own premium device. Despite the problems I had with it, I think there’s a version of the Z2 Tablet that fills a niche. The one Sony made just isn’t it.