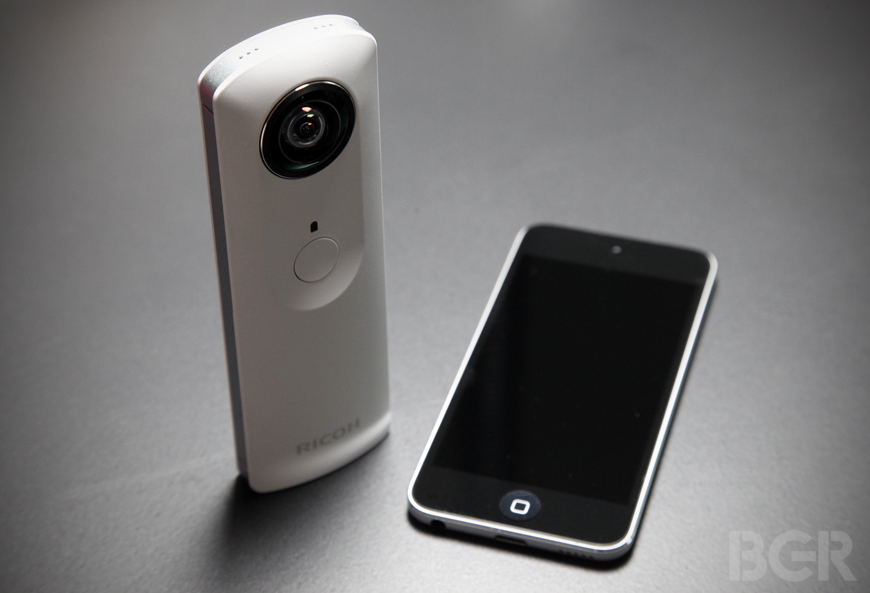 Surprise, surprise. Most of the world is still focused on Samsung’s Galaxy Gear smartwatch, the Galaxy Note 3, Sony’s new lens cameras and the Xperia Z1 hero phone, so it would be easy to forget about some of the other companies showing off new gear at IFA 2013. As it turns out though, one of the coolest new gadgets to debut at IFA this year — if not the coolest — comes from an unexpected source: Ricoh. That’s right, the same company that makes the giant photocopier sitting in the back of your office. Ricoh makes plenty more than just copiers, of course, and I’ve spent the past week checking out the its new Theta 360-degree camera, which was just unveiled at IFA Thursday morning.

Ricoh is not a newcomer when it comes to digital imaging. It surely isn’t the first company that comes to mind when you think of cameras, but it has a very respectable lineup that ranges from cheap, pocketable point-and-shoots to more sophisticated offerings with interchangeable lenses.

The Theta, however, is like nothing Ricoh has ever offered before.

Ricoh describes the Theta as “the world’s first mass-produced imaging device that encapsulates fully spherical scenes with one shot.” To elaborate a bit, it’s a small, peculiar looking point-and-shoot camera that features two 180-degree wide-angle lenses mounted on opposite sides of the device. When one captures an image with the Theta, the result is a 360-degree image that places the viewer at the center of a 3D scene.

Think of it as a next-level selfie machine.

Of course, the Theta is much more than that. Using a free iOS companion app, users can control the Theta remotely from any iPhone 5, iPhone 4S or iPod touch (fourth- and fifth-generation models are supported). An Android version of Ricoh’s app is also in the works, but it won’t be available at launch.

The app is pretty basic in terms of functionality, covering only a few core functions. For one thing, it can trigger the Theta and capture a 360-degree photo remotely. This is obviously important when it comes to taking any photo that you don’t want to appear in yourself. Devices connect to the Theta via Wi-Fi and I had no issues with range during my testing.

Ricoh’s app also automatically copies any images captured by the Theta while the device is connected. For photos taken when the Theta isn’t connected to your handset, there is also an option to browse the camera’s internal storage and transfer photos manually.

Finally, the Theta app includes integrated sharing features that allow users to send images to Twitter, Facebook or Tumblr. Unfortunately, the app’s sharing features weren’t live in the version of the app I tested, so I have no way of posting image samples here, only screenshots.

The best way to describe the Theta’s 360-degree images is to think of a globe with the viewer situated at the center of the X, Y and Z axes. You can pan around 360-degrees from side to side or up and down, and the app also lets you zoom in and out.

If you continue to pan out, you end up outside the globe, like so:

Here’s a view from the ground looking directly up:

And here are four more pictures that are zoomed in, so the user is back at the center of the globe. Note once again that every sample above and below is a screenshot captured from the same image, which is a single 360-degree photo:

As you can see, the quality isn’t anything to write home about, but we’re talking about a single 360-degree image that places the viewer at the center of any scene. With that in mind, and with the consideration that this is a very inexpensive device compared to other rigs that capture 360-degree images, it’s quite impressive.

In terms of operation, the Theta worked as advertised each and every time. Connecting from a handset is beyond simple, since the Theta broadcasts its own wireless network and you connect just as you would with any other Wi-Fi access point. My only gripe it that I wish the device would also capture 180-degree images in addition to 360-degree photos. This would allow users to capture pannable images without having to stand in an area obscured from the Theta’s view to avoid appearing in them.

While the Theta is absolutely one of the coolest things I have seen come out of IFA this year, it’s also most certainly a niche product. There are definitely some professional use cases — think about how much easier this device will make realtors’ lives, for example, allowing them to quickly and easily capture 360-degree views of rooms in a house they’re selling — but consumers at large likely won’t be intrigued enough to spend $399.99 on such a specialized camera.

It’s still a very cool offering from Ricoh, however, and those who can justify the $400 purchase won’t be disappointed.