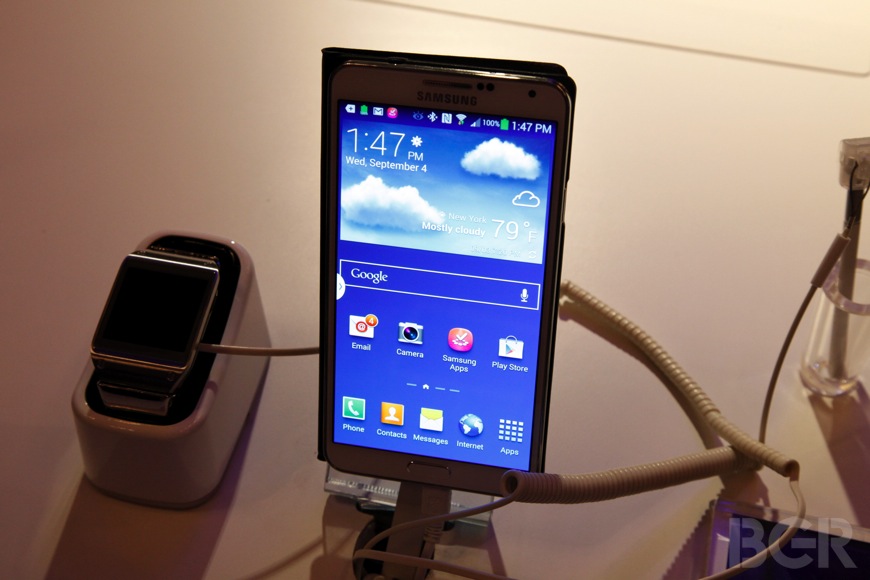 It wasn’t much of a surprise when Samsung finally unveiled its new Galaxy Note 3 smartphone on Wednesday. Forget the fact that Samsung’s marketing boss had already confirmed the announcement was coming, the Galaxy Note 3’s specs have basically been common knowledge for months. The third iteration of the phablet that popularized the category features a 5.7-inch Super AMOLED display, a quad-core or eight-core processor depending on region, 3GB of RAM, a 13-megapixel camera and Android 4.3 Jelly Bean. It also outperforms every single Samsung smartphone that came before it. There’s no question the Note 3 is a solid smartphone-tablet hybrid, but given how similar many of Samsung’s high-end devices have become, is the company’s new Note really something special?

I spent just a short amount of time with the new Galaxy Note 3 following Samsung’s press IFA press conference on Wednesday, and I can already say it’s an improvement over its predecessor in almost every way. When I reviewed the Galaxy Note II last year I called it the best phablet on the planet and truth be told, not much has changed since then.

In other words, the Galaxy Note 3 is already the best phablet on the planet and it hasn’t even hit store shelves yet.

First and foremost, Samsung’s smartphone displays are always among the most impressive on the planet and the Note 3’s panel is no different. Helping matters even more is the fact that the bezel around the display is remarkably thin on the sides of the screen, which makes it seem like almost the entire face of the phone is display. It really is a great touch that gives the phone a stunning look.

Samsung’s design continues to impress from top to bottom, though my biggest qualm remains: The Note 3 feels very cheap and plasticky compared to flagship phones made by Samsung’s top rivals. It’s slimmer than the Note II and it feels better in the hand, but it’s still very plasticky and the pleather on the back doesn’t help much.

In terms of performance, the Note 3 seems to be as slick and smooth as they come. The eight-core Exynos 5 Octa processor and 3GB of RAM are more than enough muscle to ensure Android 4.3 Jelly Bean hums along without issue. Multitasking? No problem. Multiple apps running on the same screen? No problem. The Note 3 takes it all in stride.

Samsung also introduced “Air Command” alongside the new Note 3, which opens up a fan-type menu on any screen that provides fast access to several of the device’s core S Pen functions. The new S Note and other memo/note-taking features Samsung added look pretty nice, but they add even more clutter to an already cluttered software experience.

We’ll have plenty more on the Galaxy Note 3 in our upcoming review but in the meantime, be sure to check out all of the hands-on photos in our gallery.