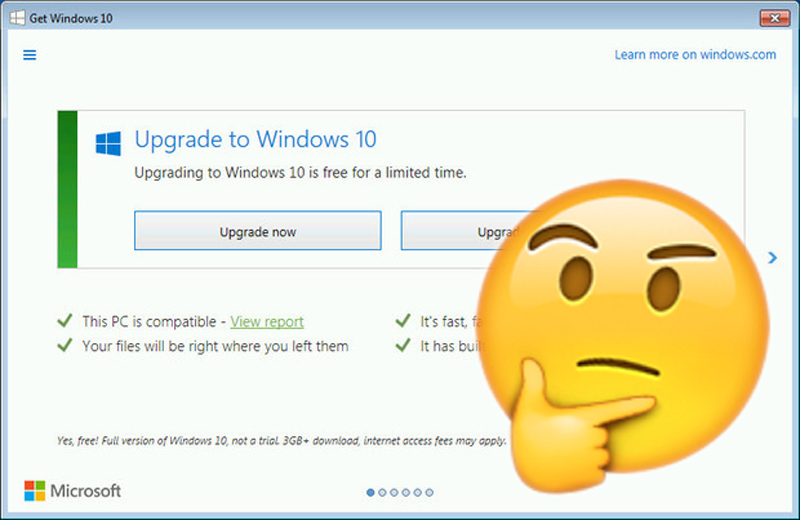 In the holiday spirit of telling it like it is, Microsoft finally admits what everyone has known all year: pushing Windows 10 upgrades on people, whether they wanted it or not, was a bad move that ruined a great software upgrade.

I wonder how much Microsoft spent on that survey!

In the latest edition of “Windows Weekly,” host Paul Thurrott asked Microsoft CMO Chris Capossela if there were any regrets from the past year. Capossela ‘fessed up that Microsoft was “too aggressive” in pushing out the free Windows 10 upgrade. He said that “we know we want people to be running Windows 10 from a security perspective, but finding that right balance where you’re not stepping over the line to being too aggressive is something we tried.”

As it turns out, deceiving users into thinking they were dismissing the Windows 10 update when actually they’re just pushing it to the back of the screen was too deceptive. Who’d have thought it?!

All joking aside, it’s good of Microsoft to own up to its rather dramatic misstep. I’d agree with Capossela that the Windows 10 update procedure was a huge mistake by Microsoft. It managed to take something that should have been good — giving away a great software update to billions of users — and turn it into something bad. It takes real skill to snatch defeat from the jaws of victory like that.

Reading Capossela’s full comments below, I actually start to feel sorry for the Windows team that had to suffer the bad PR this summer.

“We know we want people to be running Windows 10 from a security perspective, but finding the right balance where you’re not stepping over the line of being too aggressive is something we tried and for a lot of the year I think we got it right, but there was one particular moment in particular where, you know, the red X in the dialog box which typically means you cancel didn’t mean cancel. Within a couple of hours of that hitting the world, with the listening systems we have we knew that we had gone too far and then, of course, it takes some time to roll out the update that changes that behavior. And those two weeks were pretty painful and clearly a lowlight for us. We learned a lot from it obviously.”