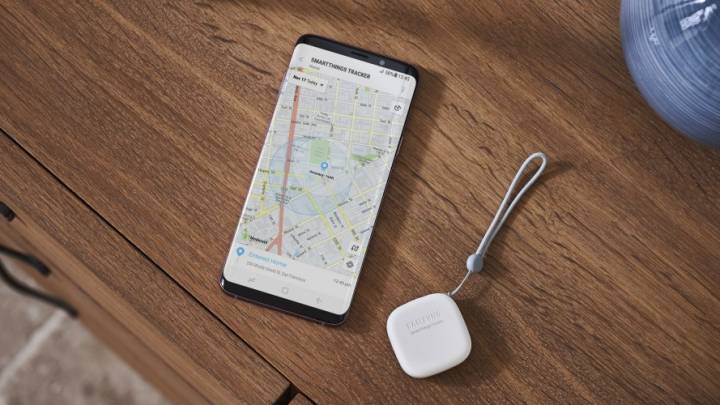 Samsung is launching an LTE-powered GPS tracking device at the end of the week that you can attach to anything from a backpack to keys and pet collars to hopefully help you cut down on losing things so much.

The new gadget is the SmartThings Tracker, which will be available through AT&T starting on Sept. 14 and through Verizon at a still-to-be-announced date later this year. The tracker retails for $99 with AT&T service included for the first 12 months at no additional charge, and after the first year pricing for AT&T service is $5 a month or $50 per year.

Features of the tracker include its reliance on LTE-M network technology, which Samsung says provides a greater range of signal coverage compared to Bluetooth. It also allows for better tracking accuracy when the device is indoors or below street level.

If you push the device’s power button twice, that sends a notification to the SmartThings mobile app which offers a way for family members to share location updates with each other. Users can also check on an item’s whereabouts by using the Live Tracking feature in the SmartThings app to get minute-by-minute location tracking for up to 10 minutes.

“By combining the coverage of nationwide carrier networks with the expansiveness of the SmartThings ecosystem, we’re helping families keep track of what matters most to them while also continuing to make it easy to control and manage their smart home, all in one device,” said SK Kim, Senior Director, IoT Product Marketing at Samsung Electronics America, in a statement included with the product announcement.

Among its other features, the tracker is designed for both indoor and outdoor use and sports an IP68 water-resistance rating. The battery can also last up to a week on a single charge with normal usage.

There’s tracking, meanwhile, and there’s also just keeping tabs on something even before you’ve lost it. You can set up a geo-fenced zone in the app, and SmartThings users will get pinged whenever a tracker enters or leaves that zone. Perfect for something like keeping an eye on a pet in the backyard. Samsung says the tracker can also function like a proximity sensor to trigger smart home automations, like lights that switch on whenever you approach the house or the thermostat reverting to your preferred setting when you pull into the driveway.

Samsung is also selling a strap pouch to keep the tracker in as a separate accessory. You can get more details from Samsung here.