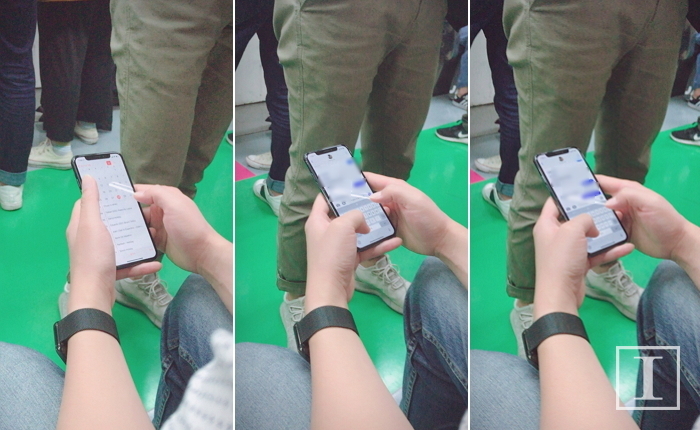 Apple announced the iPhone X weeks ago, which means we have most of the details we could possibly want about the new phone. But with over a moth left before launch, there’s still a lot of notch longing that’s going unfulfilled. So while a photo of the iPhone X in the wild doesn’t actually tell us anything new, it does work like a rumor calamine lotion to tide us over until November 3rd.

The photo comes from Insight, a Korean news outlet that received it in an anonymous tip from a reader. According to the source, someone was playing with a phone on a subway in Seoul. We’re either looking at a pre-release iPhone X, or proof that the copycat industry works crazy fast these days.

“”I saw someone using the iPhone X on the subway train on the evening of the evening of the 28th,” Mr A told Insight. “I felt the display was very clean and close.” The site said that “According to a photo from Mr. A, the man next to the subway made a note of the schedule on his iPhone calendar and kept in touch with his acquaintances with his child using messages.”

The photos show something that sure looks like the iPhone X Apple already revealed, and it’s running something that looks like iOS. Making an iPhone X lookalike wouldn’t be hard for Chinese clone companies from a hardware standpoint, but making a convincing iOS mockup that runs smoothly would be much harder.

Apple has famously legendary security, but things are understandably more lax in the gap between announcement and full release. Devices are likely in the hands of developers and cell carriers by now, and it’s not inconceivable that someone would be using one on the subway.