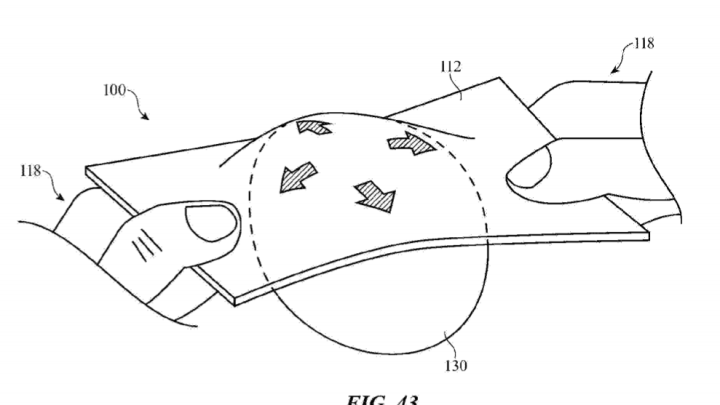 The iPhone 8, which should magic its way into our lives in fall this year, is expected to be a design revolution by Apple’s standards. All the physical buttons may go, to be replaced by a single glass-covered display in front.

But for as much as the iPhone 8 is meant to be a revolution, it will still look a lot like all the smartphones that came before it. So what would it take to actually revolutionize smartphone design? This patent filing might give us some idea.

Filed for in October last year and revealed today, Apple’s latest patent is for “Electronic Devices With Soft Input-Output Components.” In practical terms, that means a flexible display with a mesh-like grid of electronics on the back, which is pretty close to the concept of a flexible smartphone that we’ve been promised for years.

Flexible displays have been around for a while, and aren’t particularly challenging to manufacture. The complicated part has always been what to do with sensors, chips, modems and camera modules, none of which particularly like being bent.

Apple’s latest design puts all those components in a grid pattern consisting of “islands” of non-bendable components, linked by conductive pathways that can be bent. That design should allow the overall device to be flexed and bent without stressing any one individual component, which means that an entire device could be made flexible.

Unfortunately, the patent doesn’t really shed any light on what Apple envisages using this technology in. The most obvious solution would be some kind of wearable wristband smartphone, but if people aren’t ready to accept not having a headphone jack right now, I’m not sure there’s enough courage in the world to sell the iWristPhone quite yet.