At WWDC this year, Apple announced that iOS 11 will enable iPhone and iPad users to send cash to friends and family members directly from within the Messages app. As Apple detailed, the feature — which is called Apple Pay Cash — leverages Apple’s existing Apple Pay frameworks and will allow users to securely send cash from their credit or debit card. Though a number of different person to person mobile payment options already exist, with Venmo being one such example, Apple’s own implementation might be easier to use.

Still, there will reportedly be some safeguards implemented by Apple to keep everything above board. As noted by AppleInsider, new data strings found inside the most recent iOS 11 beta suggests that users intent on using Apple Pay Cash might have to verify their identity via a photo ID. Note the highlighted portion of the photo below which reads: “Verify your identity to continue to use Apple Pay Cash.” 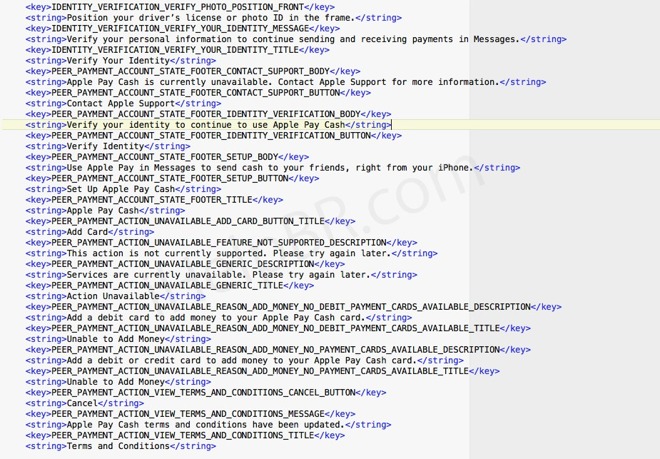 Meanwhile, other data strings found in iOS 11 beta 7 indicate the following: “Has the information on the front of your photo ID been captured clearly?”

The good news is that we won’t have to wait much longer to see what Apple Pay Cash looks like and what will be required to set it up. With September just around the corner, iOS 11 is set to drop in just about three to four weeks and we’ll know soon enough what the user experience will be like.