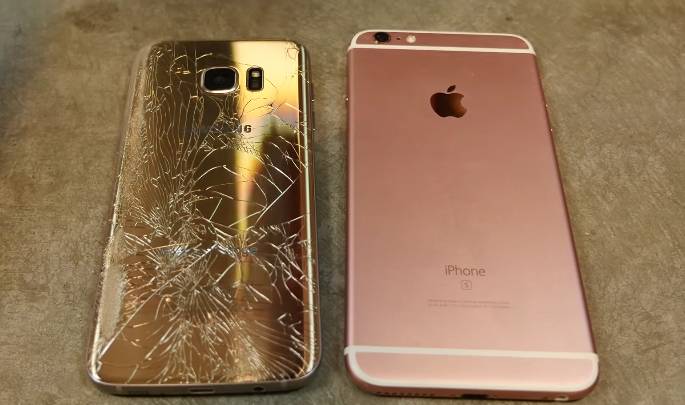 Samsung’s Galaxy S7 and Galaxy S7 edge have begun shipping early, which means some people have already started dropping them against concrete to assess their built quality and resistance to breaks. And what better device to pit them against than their archenemy, the iPhone 6s?

That’s not to say the Galaxy S7 edge will break easily, because it’ll probably survive most drops from reasonable heights. Scenarios like dropping the phone as you take it out of the pocket or while you’re on a call won’t be fatal, with the latter being the most dangerous type of accident for the handset.

In the video below, you’ll see the front and back Gorilla Glass 4 glass on the Galaxy S7 edge do rather well in standard drops, though the glass on the back of the phone ends up being the first to crack.

EverythingApplePro took testing to the extreme, attempting 10-foot and 20-foot drops with both phones. The iPhone’s display refused to break, though the device did get plenty of scratches and it even bent a little after all those drops. Meanwhile, the Galaxy S7 couldn’t handle anymore hits after the first impact that shattered the glass. So if you’ve broken the glass on yours, it’s likely that and subsequent drops will be disastrous.

But again, unless you’re unfortunate you’ll probably avoid any damage from most typical drops with either phone. Check the video below to see the full Galaxy S7 edge vs. iPhone 6s Plus drop test. Also of note, a video testing the Galaxy S7 in scratch and bend tests is available at this link.