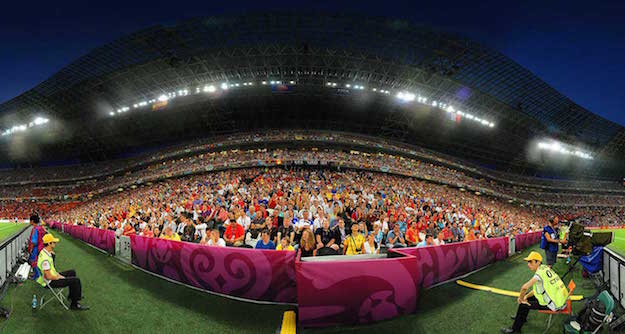 People love laughing at the pseudo-technology that one tends to see on TV shows like CSI. Often times, we see investigators endlessly zoom-in and enhance video footage to a laughably granular level, as evidenced by this widely circulated and notoriously absurd clip of CSI NY investigators magnifying a photograph to such an extent that they can then magically analyze the reflection of an image off of someone’s eyeball.

TV nonsense aside, some of the detail advanced cameras can pick up these days is truly astounding, and no where is the more apparent than in a photographic service provided by a company called Fancam.

Based out of Cape Town, South Africa, Fancam specializes in taking incredibly high quality and 360 degree photographs of sporting events and other large public gatherings. Fancam’s photos are so detailed that they can easily “identify each and every person in a 90,000 strong stadium crowd.”

From NFL stadiums to NBA arenas, and even La Liga soccer fields, the work that Fancam does is absolutely jaw-dropping. With a Fancam photo checking in at 20 gigapixels (that’s 20,000 megapixels), users can navigate around a static photograph of a stadium and quickly make out the individual faces of everyone in the crowd. Playing around with Fancam’s photos is just as fun as it is impressive, and the level of detail provided by the service almost makes you feel like you’re perusing through some CIA spy shots.

The video below provides a brief example of what the user experience is like.

While some teams make use of Fancam sparingly, if at all, others, like the New England Patriots, employ Fancam technology at every single home game. If you’ve attended a Patriots home game this year, surprise, you’re on camera.

Some of the other sporting events where Fancam has unleashed its incredible photographic talents include the 2015 NBA Finals, various concerts across the globe, and even this year’s Daytona 500. In fact, some of the Fancam photographs taken at music events are even more impressive than those from sporting events. At a sports stadium, there’s a level of organization to be had — assigned seats in clearly marked rows. But at music events, such as this Fancam of Lollapalooza in Chile last year, the crowd layout is nothing short of  random, with many folks standing side-by-side like sardines. That said, being able to find a high-quality photo of yourself or friends amidst a chaotic sea of people is nothing short of remarkable. You can check out the most recent venues and events to make use of Fancam’s technology over here.

As to how it all works, Fancam details its process below.

The source images are uploaded from the photography venue, via our secure servers, to our production office in Cape Town where our production team awaits their arrival.Equipped with extremely powerful custom-built computers, the team diligently stitches the source images together and make sure each and every fan is presented in the best possible way.The end result is a massive image file – literally too big to open on a laptop, let alone view over an internet connection.To make the content accessible the image is ’tiled’ – a process of dividing the image into 60 000 smaller images and arranging them in such a way that they represent different possible zoom levels for each point in the large image. Much like the technology used in digital mapping services like Google Maps, each Fancam has a layered approach to data that allows users to zoom into any part of this massive image without having to download large chunks of data.After the tiles have been created, they are uploaded to our secure servers and fans can start zooming, tagging and sharing the content.

While you’ll have to head over to Fancam’s website to see more examples first-hand (embedding is not an option), the following photos illustrate how incredible the service is.

Below we have a cross-section of fans from a New York Knicks game. I added the blue circle to highlight the area to be zoomed in on.

Zoom in a bit, and things start to crystalize.

Zoom in as far as you can, and you can magically make out the faces of individual fans in the stand. It’s a fun tool to play around with, especially if Fancam happened to cover any events you might have attended yourself.