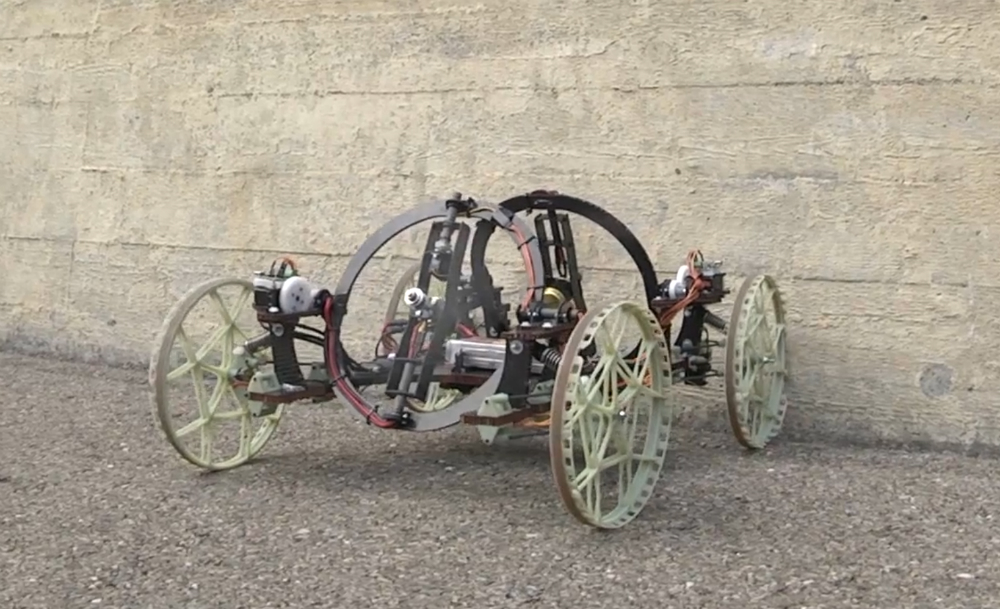 Most four-wheeled robots would probably be stopped in their tracks by a high vertical obstacle like a wall, but that’s not the case for a recent creation that can drive vertically up a wall. Called VertiGo and developed by and ETH Zurich, the robot can roll on vertical surfaces just as easily as it does on smooth flat surfaces.

As you can see in the following short clip, VertiGo can easily beat gravity with the help of two propellers that generate downward forces that press the robot to the surface it’s driving on.

Using the propellers when having to climb over vertical objects, the robot can adapt to any terrain, no matter how steep. More interestingly, the robot can climb a wall by itself.

“The choice of two propellers rather than one enables a floor-to-wall transition – thrust is applied both towards the wall using the rear propeller, and in an upward direction using the front propeller, resulting in a flip onto the wall,” explains.

The video also shows the robot climbing down off a wall, suggesting the robot could bypass obstacles to reach a certain destination.

It’s not clear what the purpose of this particular robot is. Will it be turned into a wall-and-ceiling-driving toy? Will a future Star Wars droid climb walls just like that? Or will it be used for other purposes? The company does say that “by transitioning from the ground to a wall and back again, VertiGo extends the ability of robots to travel through urban and indoor environments,” without explaining future uses for it. See the robot in action yourself below.