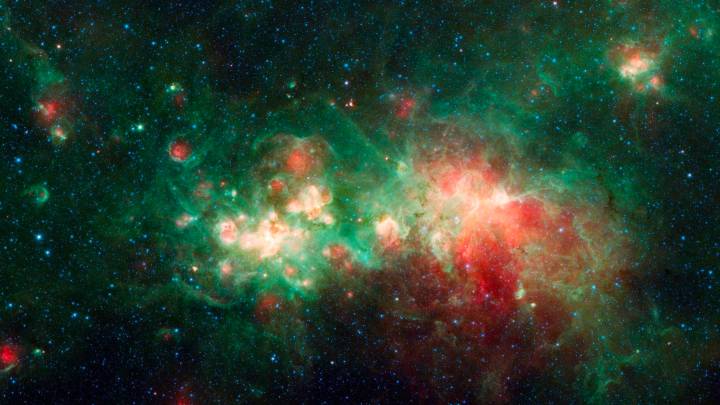 NASA’s Spitzer Space Telescope is no more. The space agency declared the trusty observatory dead back in January of this year, but it shot so many incredible images during its extensive time in space that it’s going to take some time to appreciate all of them.

Now, NASA’s Jet Propulsion Laboratory is highlighting one particularly stunning image that Spitzer captured during its stint in space, and it’s pretty incredible. It’s a nebula known by the modest moniker W51, but what it lacks in a flashy name it more than makes up for with its star-building power. It’s considered one of the biggest “star factories” in our entire galaxy, and it’s doing some incredible work.

Stars don’t just pop into existence. They have to be built slowly from gas and dust that accumulate over time. As this material gathers, the gravitational pull of the star seedling grows with it, and more and more material is drawn in. Once enough of the right material has gathered, the intense pressure inside the would-be star begins to generate fusion reactions. It’s that fusion that powers the newborn star.

“Star factories” like W51 happen to have a whole lot of the right kind of material on hand, and as stars form, live, and die, the dust and gas are recycled into new stars. As each star forms, it clears the region around it, while also exerting gravity on anything nearby.

“The dust and gas in the region are swept around even more when those stars die and explode as supernovas,” NASA’s Jet Propulsion Laboratory explains. “On the nebula’s younger left side, many stars are just beginning to clear away the gas and dust in the same way the stars in the older region have done. It’s apparent that many of these young stars are in the process of forming bubbles of empty space around themselves.”

Understanding how stars are born and the lifecycle that follows is incredibly important since as far as we know, stars are vital to life on planets. Being able to watch a star factory in action is a real treat for scientists.

“We can’t observe star-forming regions in other galaxies in anywhere near the level of detail that we can in our own galaxy,” Breanna Binder of California State Polytechnic University said in a statement. “So regions like W51 are really important for advancing our understanding of star formation in the Milky Way, which we can then extrapolate to how star formation proceeds in other, nearby galaxies.”