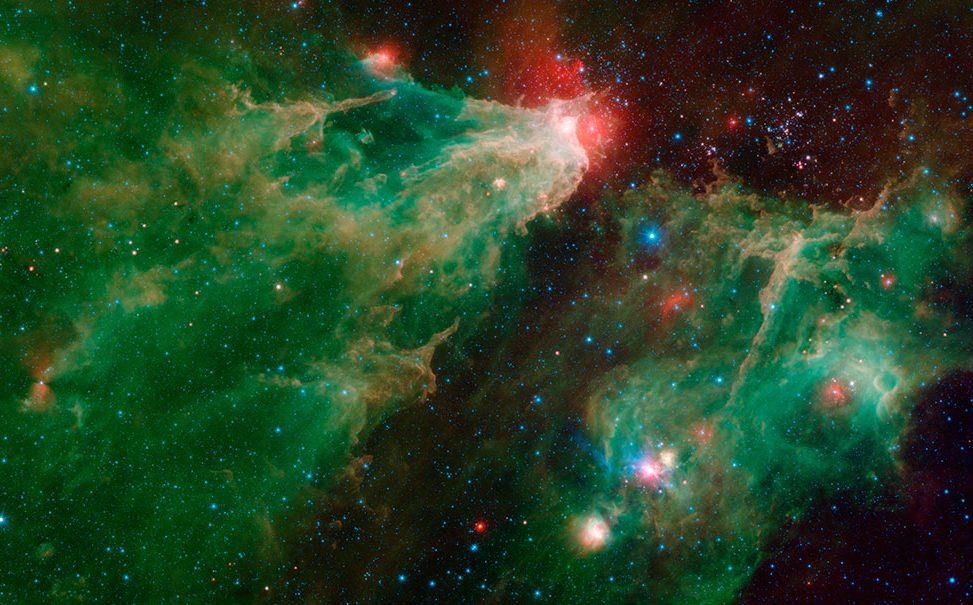 NASA’s Spitzer Space Telescope has a habit of providing us with some downright gorgeous views of deep space, but its latest snapshot might actually be its best yet. The image, which NASA is showcasing in a new blog post, is absolutely packed with things to see, but we’ll need NASA’s help to actually explain it all.

The image of a mosaic of two regions of space known as Cepheus B and Cepheus C. The massive green cloud that dominates the frame is a nebula, which is a collection of loose material such as dust and gas that may eventually clump together to form other objects like stars.

Along with the original image, NASA has been kind enough to provide us all with a labeled version that points out a handful of neat sights:

Near the left center of the image, you’ll spot the colossal star known as V374 Ceph, which astronomers theorize is surrounded by a ring of debris that allows it to cast the cone-shaped shadows off of its sides.

Some of the newer features of the image, like the young nebula taking shape near the bottom right of the frame, are just babies in comparison to the larger nebula and star clusters. The image contains both new and very, very old stars and collections of objects which, NASA suggests, makes it a “family portrait” of sorts.

As time passes, older star-forming regions fizzle out and new ones form from the material ejected from dying stars.

Along with the image, NASA produced a very cool video to provide additional context. It’s only a couple of minutes long but does a great job of covering all the interesting features we can see in the Spitzer image.

Spitzer is currently nearing its 16th year of service, which is significantly longer than the planned five-year primary mission timeline. The spacecraft is clearly still capable of delivering gorgeous views of space, so we’re glad it’s still around.