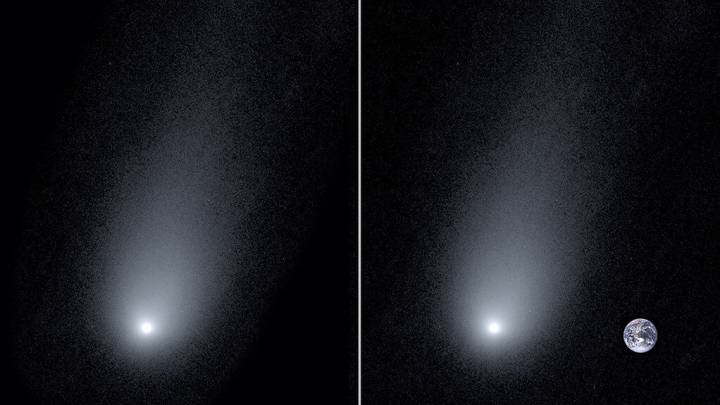 A few months back an amateur astronomer spotted something very special. It was a comet that, based on its trajectory and speed, had to have come from outside of our own solar system. It’s only the second time in history that scientists have spotted such an object, and astronomers scrambled to learn more about it.

Earlier this week, a team of astronomers from Yale spotted the comet, known as 2I/Borisov, from the W.M. Keck Observatory in Hawaii. It’s our best look yet at the newest visitor to our solar system, and an important step toward learning more about the object’s alien origins.

When astronomers first detected 2I/Borisov it was easy to see that it wasn’t from our neck of the woods. It was traveling through our system at an angle that is totally unlike anything else orbiting the Sun.

The comet was spotted early in its trip to our system, giving astronomers ample time to prepare for observations. The first-ever interstellar object spotted by humans was the cigar-shaped rock known as Oumuamua, which was only spotted after it was already speeding out of our system at a breakneck pace, hindering scientific efforts to study it.

2I/Borisov won’t get very close to Earth, and will only be around 190 million miles from our planet at its closest approach. Despite that incredible distance, astronomers are able to see that our Sun is already affecting it. As the object is heated by the star at the heart of our system, it releases more and more gas and dust, creating a long, hazy tail. The core of the object is only around a mile in diameter, but the cloud it creates is many times that size.

Detecting interstellar objects when they pass through our system affords scientists an opportunity to learn more about other planetary systems without having to leave our own. We’re not to the point where we could feasibly launch a mission to study such objects on short notice, but observations from Earth can teach us a lot about them.