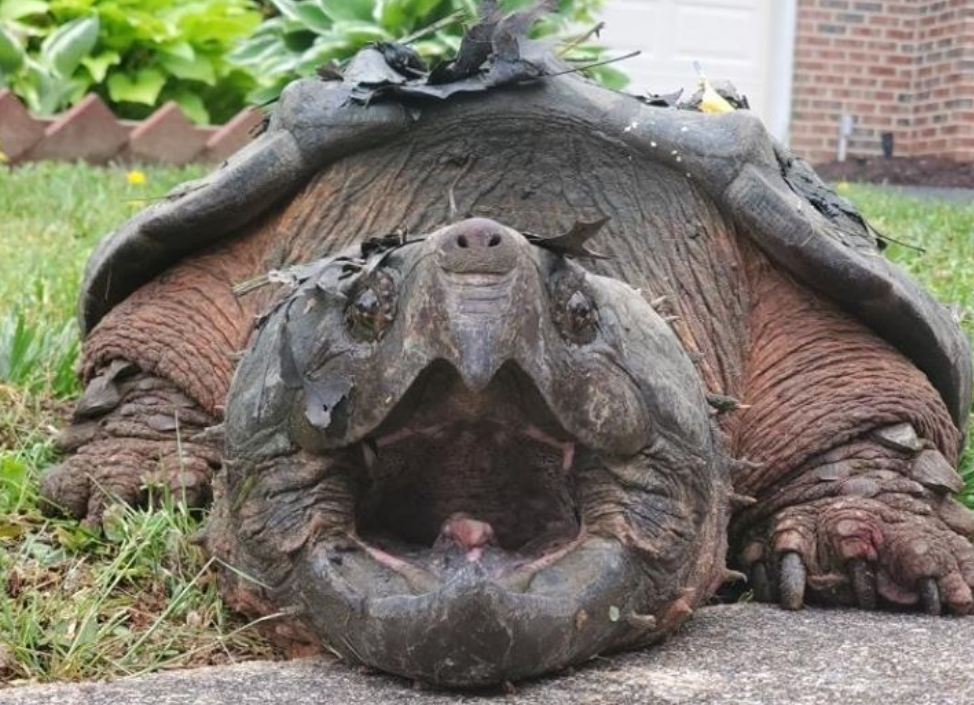 Depending on your specific circumstances, living in the suburbs can either mean rarely seeing wildlife or regularly encountering animals hanging out in your backyard. For residents in a suburban area of Alexandria, Virginia, a particularly interesting creature not only made an appearance but proved to be a bit of a nuisance and even posed a danger to vehicles making their way along the otherwise calm roads.

A massive 65-pound alligator snapping turtle was spotted by residents who were unfamiliar with the species, as it’s typically found much farther south. The beast, now nicknamed Lord Fairfax, just couldn’t decide where he wanted to go, repeatedly crossing the street in the residential area and risked making himself a living speedbump for passing motorists.

After local law enforcement was alerted to the turtle’s presence they enlisted the help of animal control experts who tracked down the intimidating aquatic reptile and brought him to a local animal shelter.

At 65 pounds, the alligator snapping turtle is an awe-inspiring sight. With long, clawed feet and jaws that can easily remove a finger from a hand, you wouldn’t want to get anywhere near it. But as frightening as he may appear at 65 pounds, Lord Fairfax is actually just a baby.

Alligator snapping turtles can get incredibly large, even topping the scales at 200 pounds, so this one still has a lot of growing to do. Nevertheless, it couldn’t find a home within its budget in suburban Virginia so officials have instead decided to provide it a free residence at The Virginia Zoo in Norfolk, according to AP.

Nobody is quite sure how the alligator snapping turtle managed to make its way to the suburbs where it was found. It isn’t considered to be native to Virginia, or virtually anywhere along the East coast with the exception of Southern Georgia and Western Florida. The animals can’t survive winters in cooler climates, and it would have surely perished if it hadn’t been rescued.

It’s possible, of course, that Lord Fairfax had been kept as a pet when he was much smaller. Sometimes exotic animal lovers adopt species that they don’t know much about, only to realize that their beloved pet will quickly outgrow their cuteness and become unmanageable. Nobody came forward to claim Fairfax or admit that he was one a pet, but at least now he has a home where he can live out his life in relative comfort and without having to worry about harsh winters.