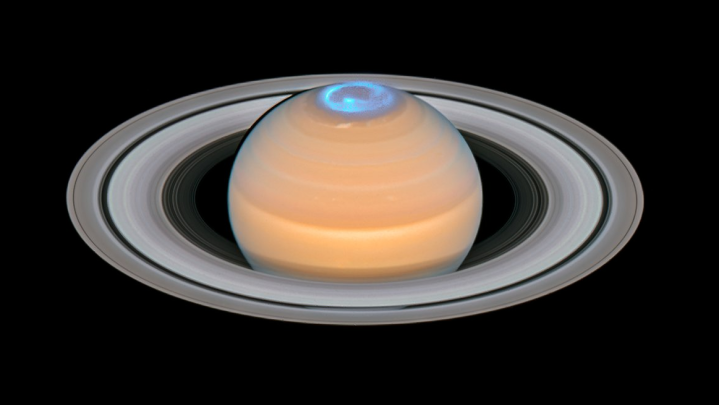 Here on Earth, auroras are pretty neat sight to see. The phenomenon, commonly called the “Northern Lights,” is fairly well understood by scientists. They occur when charged particles from the Sun are funneled towards Earth’s poles by our planet’s magnetic field. Those particles then interact with various gasses in Earth’s atmosphere and create a brilliant light show in the night sky.

We might think of auroras as being special to Earth, but in reality they are possible on any planet with a magnetic field and an atmosphere. Saturn happens to be one of those planets, and researchers using the Hubble Space Telescope recently observed what auroras look like on Saturn’s north pole.

The image you see above is actually a composite. The auroras observed on Saturn occur in ultraviolet wavelengths, so they’re not visible when looking at the planet in what we know as visible light. What you’re seeing is the ultraviolet images of Saturn’s aurora layered over another image of Saturn in the visible spectrum taken at a later date.

As the European Space Agency notes along with the release of the images, Saturn’s auroras occur in these wavelengths due to the fact that the planet’s atmosphere is hydrogen rich. On Earth, visible auroras occur thanks to the presence of oxygen and nitrogen, producing the colorful brush strokes of light in the sky. Still, Hubble’s instruments are able to see them lighting up the planet’s poles all the same.

A video, seen above, showing a succession of different aurora observations over a short period of time suggests that Saturn’s auroras spin and swirl much like those that we are used to seeing on Earth. You wouldn’t be able to see them with the naked eye, but they’re there.

“The variability of the auroras is influenced by both the solar wind and the rapid rotation of Saturn, which lasts only about 11 hours,” ESA writes. “On top of this, the northern aurora displays two distinct peaks in brightness — at dawn and just before midnight. The latter peak, unreported before, seems specific to the interaction of the solar wind with the magnetosphere at Saturn’s solstice.”