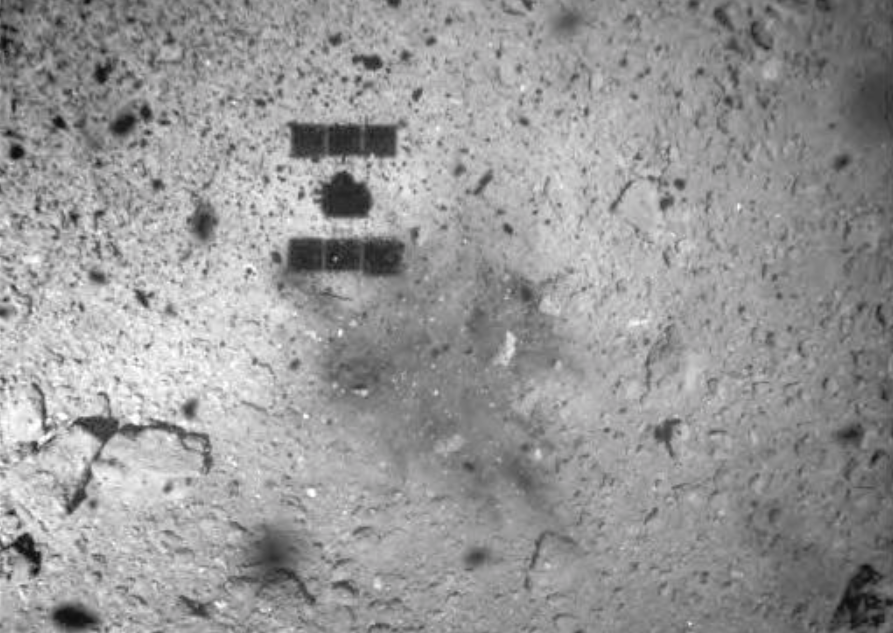 Japan’s space agency JAXA is still celebrating the success of its first attempt to collect a sample of the asteroid Ryugu using the Hayabusa2 spacecraft, and it seems the asteroid itself is now left with a mark to prove it.

In a new set of images released by JAXA we can see Ryugu is now painted with a large dark blob that now graces its dusty white surface. The change is due to dust that was kicked up from beneath the surface when the spacecraft fired its projectile, causing a cloud of debris. Some of that debris was then collected by the spacecraft and will eventually be returned to Earth.

Here’s how JAXA describes the image:

[The photo] was captured roughly 1 minute after touchdown at an estimated altitude of about 25m (error is a few meter). The color of the region beneath the spacecraft’s shadow differs from the surroundings and has been discolored by the touchdown. At the moment, the reason for the discoloration is unknown but it may be due to the grit that was blown upwards by the spacecraft thrusters or bullet (projectile).

JAXA engineers and scientists are extremely happy with how this first sample collection attempt played out, and it’s a good sign that future collection maneuvers have a good chance at success.

Hayabusa2 is scheduled to perform a couple more sample-snagging dips to Ryugu’s surface before eventually heading home. When it does so, it’ll arrive on Earth with the material stowed away, and you can be sure that researchers will be eager to examine it.

The mission should tell us a lot about the makeup of asteroids in our solar system. Those vital details could one day help us prepare planetary defenses against space rocks like Ryugu that may threaten our existence.