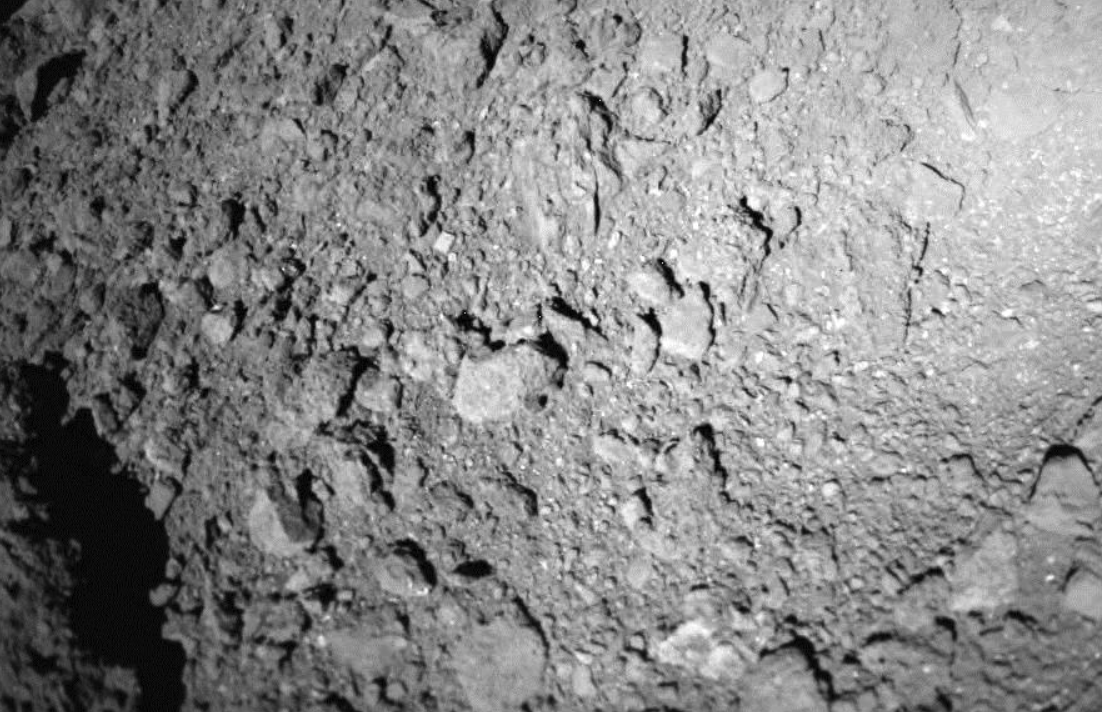 The Japanese asteroid probe Hayabusa-2 has already delivered some gorgeous images from its orbit around the asteroid Ryugu which it arrived at a number of weeks ago. The delivery of a pair of rovers to the rock’s surface yielded even more photographic eye candy last week, and today brings yet another gorgeous look at the object’s surface.

The Hayabusa-2 spacecraft packed a whole bunch of fancy tools along for its years-long trip to Ryugu, and the latest to get its shot at examining the rock is the MASCOT lander. As the cube-shaped lander descended to the rock yesterday it captured its first image of the asteroid and sent it back home.

MASCOT — which stands for Mobile Asteroid Surface Scout — is a boxy, sensor-packed lander that will take readings from the asteroid and deliver data back to its handlers on Earth. It’s also equipped with some very nice imaging hardware and it used its slow tumble towards Ryugu’s surface as an opportunity to snap a very nice photo.

As you can see from the image above, the asteroid’s surface is a lot like you might expect. It’s rocky and pitted, showing signs of its long stay in our Solar System.

“The lander successfully separated from the Japanese Hayabusa2 space probe at 03:58 CEST,” the DLR German Aerospace Center said in an announcement. “The 16 hours in which the lander will conduct measurements on the asteroid’s surface have begun for the international team of engineers and scientists. The day before, the Japanese Space Agency’s Hayabusa2 began its descent towards Ryugu. MASCOT was ejected at an altitude of 51 metres and descended in free fall – slower than an earthly pedestrian – to its destination, the asteroid.”

The deployment and landing of the MASCOT went very well, with the project’s manager Tra-Mi Ho declaring that “it could not have gone better.”

MASCOT will now spend some time observing the asteroid, taking various readings and measurements, and then sending back all of its data to Earth. It’s just one piece of the Hayabusa-2 puzzle which also includes four other lander/rovers and the mothership spacecraft which will eventually descend to the rock’s surface to take a sample of its own before returning to Earth.