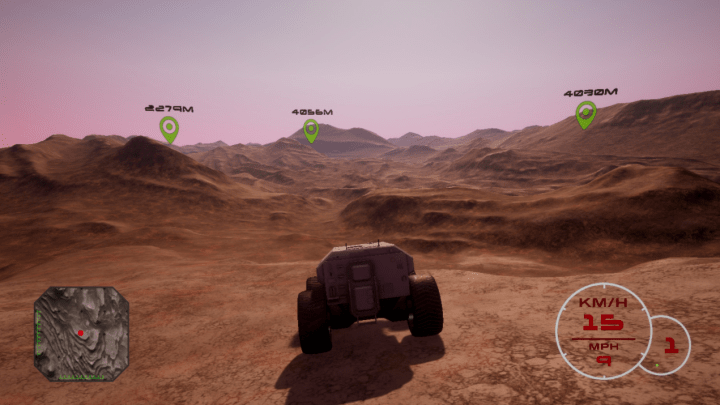 Humans are definitely (probably) going to visit Mars some day. When that day finally comes, whatever hardware we decide to bring to the Red Planet to help us get around will be driven with the utmost care by responsible explorers. A new PC game called Red Rover lets you experience what it might be like if the first Mars settlers didn’t have to worry about things like, you know, surviving.

It’s a lighthearted driving game that puts you in an incredibly powerful rover — certainly nothing like NASA would actually want to send to the Red Planet any time soon — and lets you cruise around to your heart’s content. The twist? It uses actual Mars terrain scans from the HiRISE Mars orbiter to create the most realistic Mars driving simulation ever.

“Red Rover takes satellite and terrain data from NASA’s HiRISE Mars orbiter and incorporates it into a driving simulator,” developer Alan Chan writes. “Red Rover started as a personal research project a few years ago – because I wanted to explore Mars. I’m now making this available on Steam so that like-minded explorers can get to explore Mars as well!”

It’s a pretty neat little time-killer, but as Chan is quick to note in the game’s description on Steam, there’s “no missions to do, no highscores to beat,” and driving around each of the simulated areas is really all there is to do. That’s not to say the game is boring, as each of the large terrain sections that have been imported into the game offer a good bit of variety, but don’t expect this $5 title to last you a dozen hours or anything.

It’s not a 1:1 representation of the entire planet — NASA doesn’t have HiRISE data on the entire planet anyway — but the nine different areas that are included will take you a while to explore. The game is quite pretty, and you can play it in either regular monitor mode or with a VR headset. For $5, it’s as close as you’re going to get to driving around on Mars, and it’s scientifically accurate(ish) to boot!