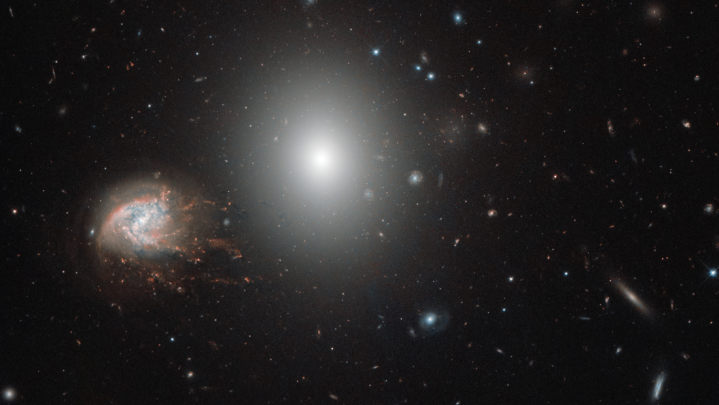 To us puny humans, Earth is a pretty big place. There’s lots to see, do, and explore here on the planet where we originated. We should be pretty happy with our circumstances, but space is full of planets that hold untold secrets that are just too tantalizing to ignore. A new photo from the trusty Hubble Space Telescope offers a tiny glimpse at why lies beyond.

The image, which looks like it was yanked right out of a science fiction blockbuster. shows a massive collection of galaxies. Each one is packed with stars and many of those stars likely have planets, moons, and all kinds of other neat stuff orbiting them. How many of those planets are habitable? How many, if any, already hold life? We might never know.

“In the northern constellation of Coma Berenices (Berenice’s Hair) lies the impressive Coma Cluster —  a structure of over a thousand galaxies bound together by gravity,” NASA explains.

The massive bright flash in the middle of the image is a galaxy called NGC 4860, which is an elliptical galaxy located some 360 million light years away. The more colorful structure to the left of the image is NGC 4858, a spiral galaxy with long, outstretched arms which are rapidly forming red-hot new stars. But there’s something else that makes NGC 4858 unique.

“NGC 4858 is special,” NASA says. “Rather than being a simple spiral, it is something called a ‘galaxy aggregate,’ which is as the name suggests a central galaxy surrounded by a handful of luminous knots of material that seem to stem from it, extending and tearing away and adding to or altering its overall structure. It is also experiencing an extremely high rate of star formation, possibly triggered by an earlier interaction with another galaxy.”

NASA says that NGC 4858 is using its gas to form new stars so fast that it will exhaust its reserves well in advance of the galaxy actually dying. Of course, thanks to the speed of light we’re seeing the galaxy as it was millions of years ago, and it might be totally unrecognizable if we were to see what it actually looks like today.