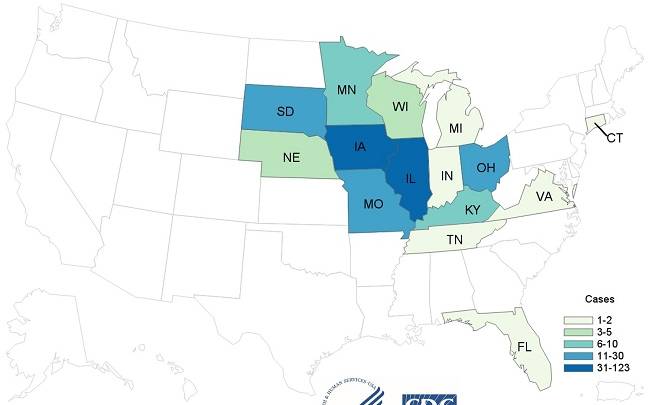 The number of people affected by an outbreak of disease caused by tainted McDonald’s salad has now grown to 395, according to the Center for Disease Control and Prevention. 16 individuals have been hospitalized, with cases recorded in 15 states. The illness is caused by the Cyclospora parasite, commonly associated with contamination from feces.

The infection takes at least a week or two to take hold, according to the CDC, and it may be up to six weeks before patients experience symptoms. The most common symptom is watery diarrhea, although patients might also experience a loss of appetite, weight loss, cramping, nausea, and fatigue.

According to the latest information from the CDC, romaine lettuce that tested positive was put into pre-made salad packages by Fresh Express in Streamwood, IL. Those packages were shipped to McDonalds locations, although not to retail consumers. However, romaine lettuce from the same batch was also packaged in pre-made salads by Caito Food of Indianapolis, IN. Those pre-made packages were shipped to locations nationwide. The pre-made salads and wraps were produced July 15 to July 18, 2018 and have a “Best By,” “Enjoy by,” “Best if Sold By,” or “Sell By” date ranging from July 18 through July 23, 2018, according to the CDC.

The CDC is advising anyone with an affected pre-made salad not to eat it, and instead dispose of it or return it to the retail location. If you ate one of thsoe salads and subsequently develop diarrhea, the CDC suggests going to a hospital to be tested for Cyclospora.

McDonald’s locations have since been replenished with non-tainted salad, but the bad news is that the infection takes at least a week to take hold, and symptoms may not show for up to six weeks. Even if the problem lettuce has been completely withdrawn, new cases may emerge for weeks to come.