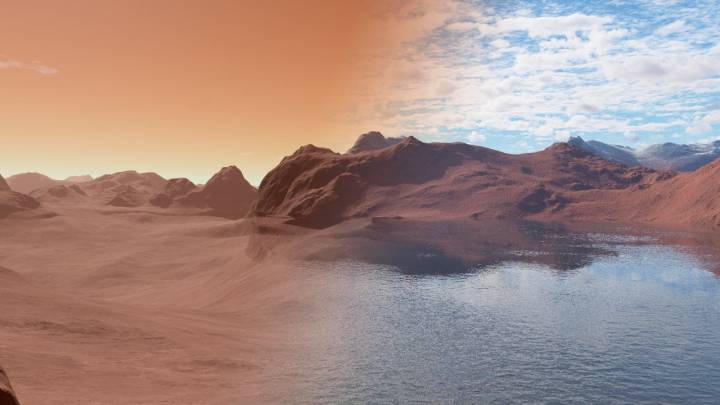 Water on Mars has been an incredibly hot topic this year. Researchers have, at times, butted heads with others, and for every piece of evidence that suggests water once dominated the Martian landscape, there’s another that strikes it down. After all, if Mars was once a watery world, where would such a vast ocean go? Was it lost to space as the planet’s atmosphere was slowly stripped away by solar winds, or perhaps frozen and buried by sand and dirt over untold eons? A new research effort has attempted to tackle the question, and their best guess quite literally sucks.

The study, which was conducted by scientists at the Department of Earth Sciences at Oxford and published in Nature, used a computer model of Mars to simulate the potential of the planet to actually suck up its own surface water. The water, reacting with rock in the planet’s mantle, may have been slowly absorbed over billions of years.

As for why such a thing would have happened to Mars but not Earth, there may be an explanation for that as well. The planet’s iron-rich mantle would have made Mars much better at absorbing water than Earth is, and Earth has another trick up its sleeve.

“The Earth’s current system of plate tectonics prevents drastic changes in surface water levels, with wet rocks efficiently dehydrating before they enter the Earth’s relatively dry mantle,” Dr. Jon Wade of Oxford’s Department of Earth Sciences explains. “But neither early Earth nor Mars had this system of recycling water. On Mars, water reacting with the freshly erupted lavas’ that form its basaltic crust, resulted in a sponge-like effect.”

This small difference in rock chemistry might have caused Mars to suck up its own vast oceans. If that happened, it might have occurred well in advance of life having a chance to take root there. This doesn’t rule out the possibility that vast reserves of water are trapped in ice deposits near the planet’s poles, but if the model is accurate it could help explain why we’ve never discovered evidence of life having existed on the red planet.