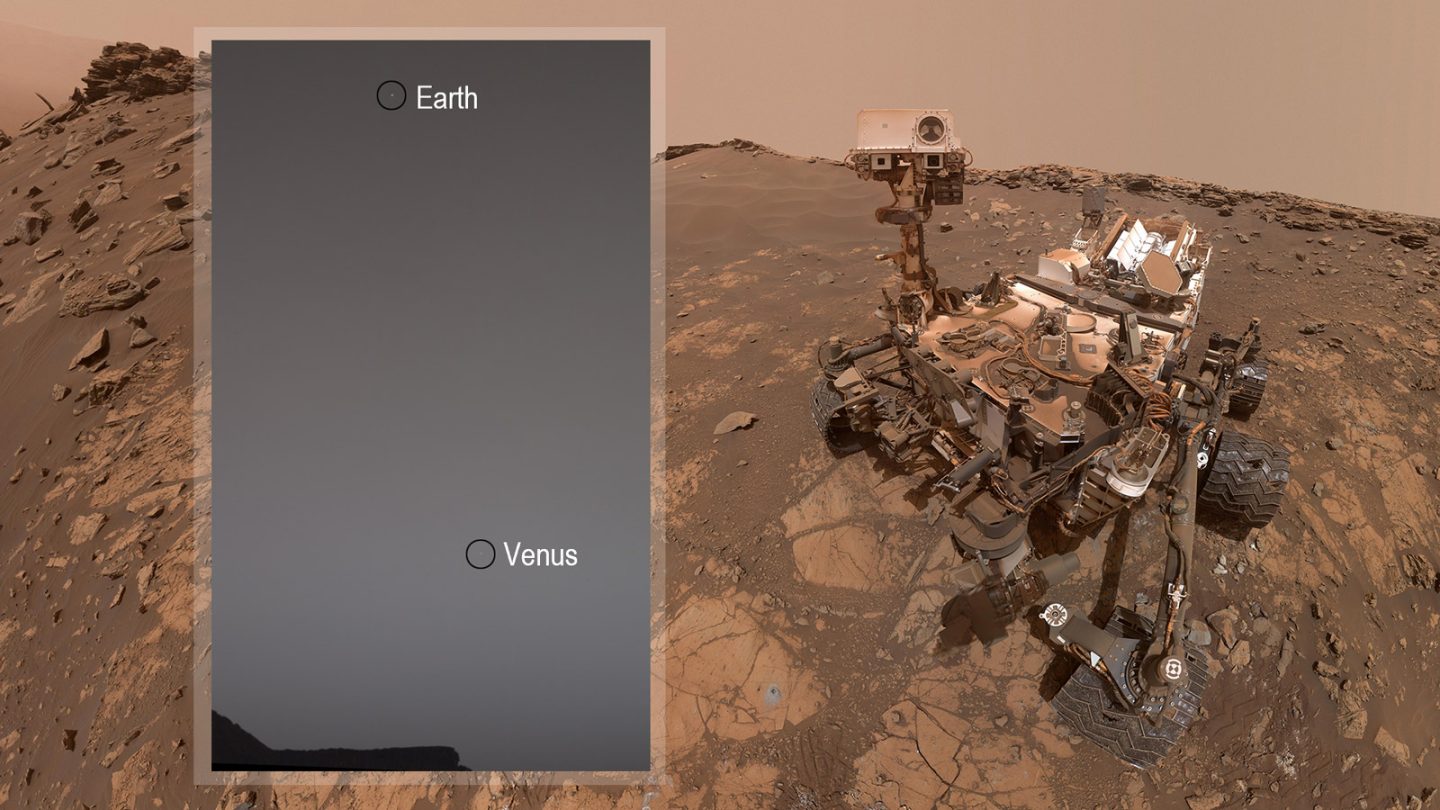 NASA’s Mars Curiosity rover has delivered some gorgeous images of the Red Planet. It’s sent back a lot of photos since it arrived on Mars in 2012, including a bunch of really awesome selfies. The rover doesn’t often spend its time looking at the sky, but it recently did just that, aiming its powerful Mastcam lenses at the martian night sky.

On Earth, we’re treated to a nighly canvas that rarely changes. Other planets have a different view of the cosmos, and Curiosity was able to spot something in its view of the sky that no telescope on Earth has ever spotted: Earth itself.

The inset image above, next to a lovely little Curiosity selfie, was snapped on June 5th of this year. It’s hard to see the features that NASA is trying to highlight, but within the tiny circles, you can spot the faint glow of both Earth and Venus. NASA explains:

Curiosity aimed its Mast Camera, or Mastcam, at the heavens about 75 minutes after sunset on June 5, 2020, the 2,784th Martian day, or sol, of the mission. A two-image twilight panorama reveals Earth in one frame and Venus in the other. Both planets appear as mere pinpoints of light, owing to a combination of distance and dust in the air; they would normally look like very bright stars.

The Curiosity science team decided to direct the bot’s camera skyward in order to “gauge the twilight brightness.” Mars goes through yearly cycles where dust is kicked up in huge quantities, creating a haze around the planet but also making it more visible when viewing it from afar thanks to an increased in the amount of sunlight it reflects.

“Even moderately bright stars were not visible when this image of Venus was taken,” Mark Lemmon, Mastcam co-investigator, said in a statement. “Earth also has bright twilights after some large volcanic eruptions.”

It was back in 2018 when a massive dust storm swallowed the entire planet whole. It was so dense that it prevented the aging Mars Opportunity rover from receiving the sunlight it needed to stay alive and charge its batteries. The bot entered into a low-power hibernation mode and NASA was hopeful that it would wake back up when the dust cleared.

Unfortunately, that didn’t happen, and after months and months of sending signals to the rover and receiving only silence in return, NASA was forced to pull the plug on the mission and declare Opportunity officially dead.

Curiosity is the only (living) NASA rover currently on the planet, but that will change in early 2021 when NASA’s Mars 2020 mission and the Perseverance rover reach the planet.