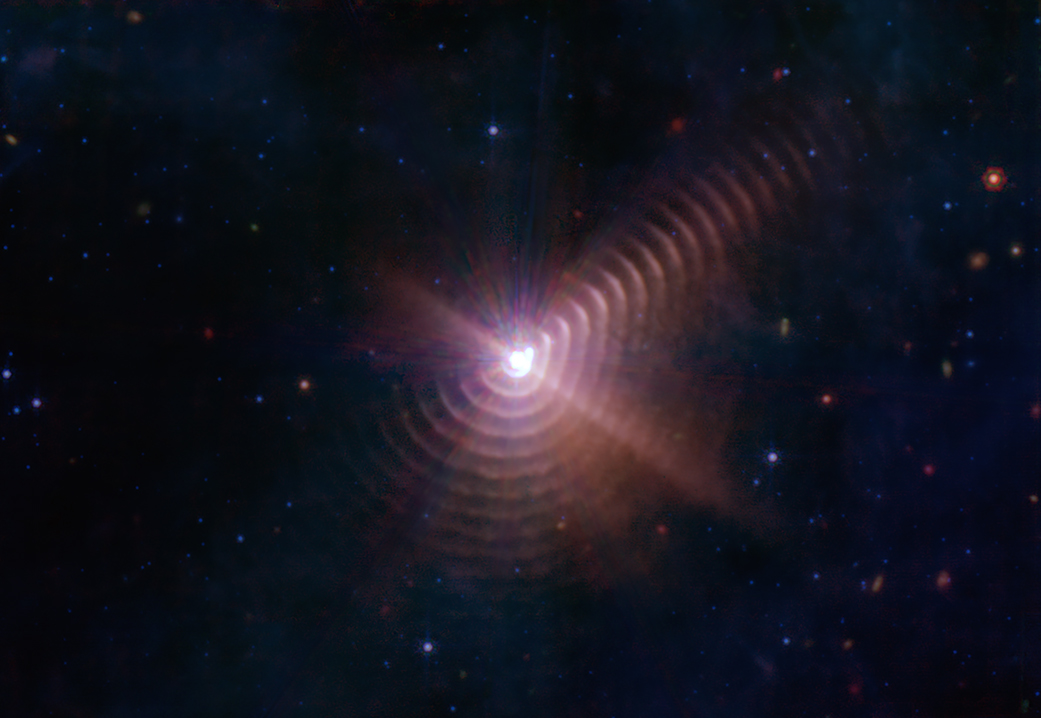 James Webb captured the image of the cosmic fingerprint while peering at a star system 5,300 light-years away. The duo of stars is known as Wolf-Rayet 140 (or WR140), and each ring surrounding the system was created when the two stars passed close together. When this happens, their stellar winds meet, compressing the gasses the stars blow into space, turning them into dust.

Similar James Webb images of this cosmic fingerprint were shared earlier this year when Judy Schmidt discovered the data in Webb’s treasure trove of observations. As I noted upon that release, the dust rings we see – which make up the phenomenon that makes this pair so brilliant – are an indicator of time itself. The stars pass each other every 7.94 years.

The rings in the newest James Webb image add up to 160 years’ worth of dust trails. The resulting cosmic fingerprint, as NASA describes it, is one of the most intriguing phenomena we’ve seen from the telescope’s data – despite the sheer beauty of Webb’s first images earlier this year.

Webb’s ability to capture infrared light makes capturing images of these phenomena so effective. If we were looking at this system using visible light, we wouldn’t be able to properly study the dust rings of these wind binary stars. Researchers published a study on the discovery in Nature Astronomy this month.

In the study, the researchers look deeper at the colliding-wind binaries that host the Wolf-Rayet star and its companion. The researchers say the star could be “a potentially important source of dust and chemical enrichment in the interstellar medium.” However, they also say that the composition and survival of the dust that makes up this cosmic fingerprint are not yet well understood.

Thankfully, because of the power behind James Webb’s infrared instruments, scientists will finally have a chance to dig deeper and discover more about these spectacular celestial happenings. Similarly, the James Webb telescope has shown us a remarkable view of the Pillars of Creation recently as well.