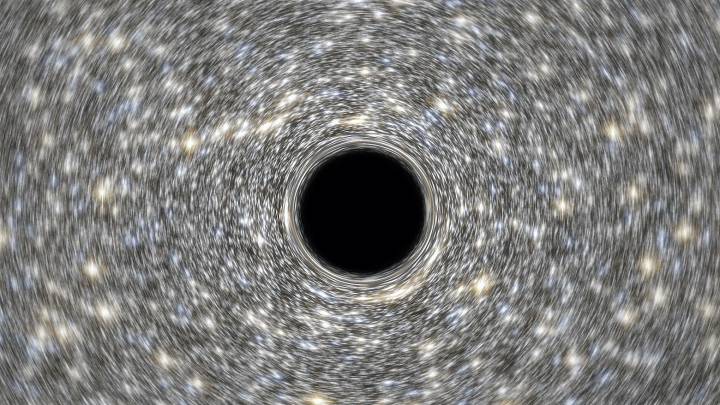 It’s common knowledge that, because of the speed at which light travels, we can see things in space that aren’t even there anymore. If we peer at a distant galaxy we’re really only seeing what the objects within it looked like when the light itself was beaming in our direction. If the galaxy is a thousand light-years away, we’re seeing what the galaxy looked like a thousand years ago.

Now, researchers believe that they may be able to use a similar technique to search for black holes that don’t exist anymore. The only difference is that the black holes aren’t just from long ago, they’re from an entirely different version of the universe. Woah.

As Live Science reports, a research team comprised of scientists from Oxford University, the University of Warsaw, and the New York Maritime College, believe they have evidence that points to the leftovers of a black hole that existed in a universe that preceded the one we’re currently living in. However, rather than visible light, the black holes leave behind what is known as cosmic microwave background radiation, or (CMB).

The idea here is that even when a universe ends and a new one begins, the background radiation from decaying black holes of the previous universe remains. A theory such as this isn’t much good without some kind of concrete foundation of data to back it up, so the researchers began hunting for what they call “Hawking points.” Named for Stephen Hawking, Hawking points are areas where the researchers believe the leftover radiation from now-extinct black holes still exists.

The team’s theory has been a hot topic for researchers, with plenty of naysayers claiming that these “points” are merely the result of the random scattering of the cosmic background radiation. To remove as much doubt as possible, the team created randomized maps of background radiation and attempted to spot similar points. They random data didn’t replicate the phenomenon, so the the researchers believe their theory is sound, and that the Hawking points are indeed the last remaining traces of long-dead black holes from previous versions of our own universe.