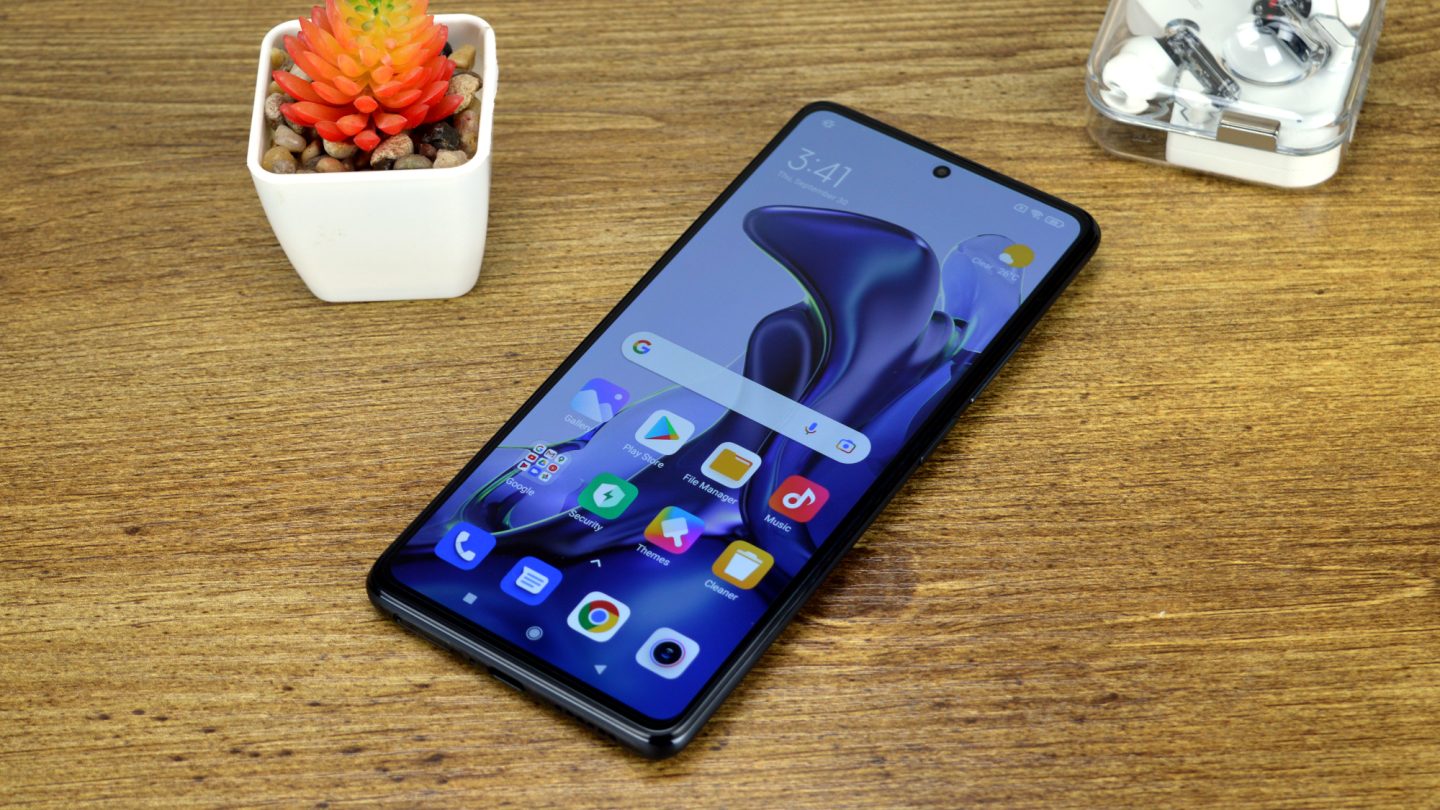 Xiaomi often comes along and undercuts the likes of Samsung, offering a similar set of specs and design elements for a lower price. But usually, there’s a trade-off. Xiaomi’s MiUI isn’t known for its stability, and Samsung has spent years refining its now-excellent cameras. The latest phone, the Xiaomi 11T.

The 11T offers decently powerful specs, a triple-camera setup, and more. Is that enough to justify its price tag, which is £499/€499? I’ve been testing the Xiaomi 11T to find out.

Xiaomi 11T Available from a partner

The Xiaomi 11T looks like pretty much every mid-tier Android phone in 2021. It’s got an edge-to-edge display with a hole-punch cutout for the front-facing camera, along with a large rectangular camera bump on the top left of the back, a USB-C port on the bottom, and so on.

None of that is to say that the phone looks bad. On the contrary, many smartphone manufacturers are copying each other’s designs for a reason. But if you’re looking for a unique-looking device, this ain’t it.

Around the edges, you’ll get all the usuals, including a volume rocker, USB-C port, and power button. That power button offers a fingerprint sensor built into it, and I found it to be fast and accurate almost all of the time.

The phone is built from relatively high-quality materials, including a glass front and back. There’s a metal frame holding it all together, too, which helps make it generally look and feel premium. That said, the glass does pick up fingerprints pretty easily.

On the front of the Xiaomi 11T, you’ll get a 6.67-inch display with a 1080p resolution and a 120Hz refresh rate. That means that while it’s not the highest-resolution display out there, it looks pretty good, and is able to easily deliver a smooth and responsive feel. Out of the box, the phone is set to 60Hz, so if you want that responsive feel, you’ll have to switch to 120Hz in the Settings app.

Unfortunately, this isn’t one of Samsung’s fancy new LPTO panels, so you won’t get a variable refresh rate — you’re pretty much locked at 120Hz. That means that switching to the higher refresh rate will have a bigger impact on battery life.

The display also gets quite bright. The display boasts a peak brightness of 1000 nits, which means that even in direct sunlight, you should be able to see what’s going on. The vast majority of the time, you won’t need to crank the brightness up that high.

Under the hood, the Xiaomi 11T offers a MediaTek Dimensity 1200 chipset, coupled with 8GB of RAM and 128GB or 256GB of RAM. In other words, it’s a midrange phone that should still be more than powerful enough for the majority of users.

In basic day-to-day use, I found that the phone performed perfectly fine. Even with relatively heavy gaming and multitasking, the phone rarely stuttered or skipped, and I never ran into any app crashes.

Benchmarks confirm the solid day-to-day performance. Thanks to the Dimensity 1200, the phone scored the below results.

These results are pretty good, especially for a phone in this price range. The device won’t beat the highest-end Android phones out there, but it’s not far off — and you won’t find yourself needing better performance. It’s akin to the performance on offer by the Qualcomm Snapdragon 870, but not quite the Snapdragon 888.

The Xiaomi 11T offers a pretty large 5,000mAh battery, and the result is that it should easily last a full day of even relatively heavy use. Even with the high refresh rate display enabled, the phone was able to last a day of gaming, multitasking, and so on. We expect the vast majority of users will have no problem with the battery life on this phone.

The Xiaomi 11T comes with a triple camera system, which is made up of a 108-megapixel main camera, an 8-megapixel ultrawide camera, and a 5-megapixel “telemacro” camera. The telemacro camera on the device was found to take incredibly close-up shots, and that remains true on this phone, which gets the same treatment.

In day-to-day use, the camera on the 11T isn’t bad. In well-lit environments, the camera is able to take relatively detailed shots with vibrant colors. The 108-megapixel main camera allows the phone to create a very detailed 12-megapixel image with a 9-in-1 pixel arrangement, with little noise. That’s good news — it means that you’ll get solid images the majority of the time.

Unfortunately, low-light images on this phone aren’t great though. The phone does have a dedicated night mode, and you’ll still be able to make out the subjects of the photo when you use it. But don’t expect the level of low-light shots that you’ll get on more expensive phones. The telemacro camera needs plenty of light to work properly, too, though when you have enough light, results are pretty good.

The phone comes with a number of camera features that can help. There’s a Pro mode, which lets you tweak things manually, and there are other modes, like a VLOG mode that lets you capture dual video. It’s a solid selection of features.

The Xiaomi 11T comes with Xiaomi’s MiUI, which is a bit of a mess. The operating system comes with random apps like AliExpress, PUBG Mobile, and WPS Office out of the box, and it’s plenty buggy. These bugs are a near-daily occurrence with MiUI, and if you buy a Xiaomi phone, you’re going to have to get used to them.

If you do get used to them, there are some positives to MiUI. Xiaomi has taken a page out of Apple’s book with a Control Center feature that lets you access quick settings without swiping through your notifications.

There are other neat touches here and there to enjoy, and I genuinely like the improvements that MiUI has made over stock Android. But the bloatware and bugs make it hard to stomach in day-to-day use.

The Xiaomi 11T has a lot going for it, especially for the price. The device offers a solid design, good camera in the price range, and great performance. It’s not perfect — software bugs are a little tricky, for example. But if you want a solid all-arounder that doesn’t break the bank, the Xiaomi 11T is worth considering.

In this price range, there’s a ton of competition. Perhaps the most notable comes from Google, with the Google Pixel 5a. Unfortunately the Pixel 5a isn’t very available, so you may not be able to get your hands on it. If not, you should consider something in the Samsung Galaxy A-series, an iPhone SE, or even an older OnePlus phone.

Should I buy the Xiaomi 11T?