The list of features missing from the iPhone is shrinking. Android stans can easily point to features and specs that could help improve the iPhone. But with the iPhone 13 Pro and Pro Max, one of the biggest of those missing features is no longer missing — a high refresh rate display.

But while ProMotion may be one of the headline new features, Apple has actually refined on the Pro iPhone in a number of other meaningful ways. There’s a better camera. There’s a better battery. And, there’s a smaller notch. Yay. 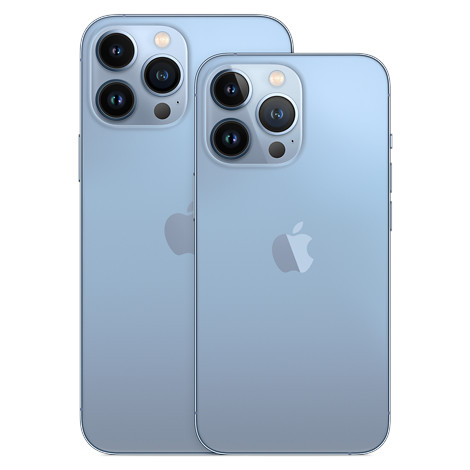 There’s a serious case to be made for the idea that this is a bigger update to the series than the iPhone 12 Pro was. Sure, the iPhone 12 series brought a flashy new design. But in day-to-day use, little was different compared to the iPhone 11 series.

That changes for the iPhone 13 Pro.

At first glance, the iPhone 13 Pro’s design is very similar to the iPhone 12 Pro. It’s got the same flat edges, is the same overall size and still has the glossy frame and matte glass on the back. None of that is a bad thing though. The iPhone 12 Pro looks great, and I’m glad that the flat-edged look has stuck around this year. I expect it’ll stay for a few more years.

Of course, there are a few design changes for the iPhone 13 Pro. Perhaps the most prominent of those is the larger camera module. It’s really quite huge. The module both takes up a larger footprint on the back of the phone and extends further from the back. It’s worth it — the camera quality is much better — but it definitely takes some getting used to. Your old case won’t work with the iPhone 13 Pro.

The iPhone 13 Pro still has a Lightning port, and it’s getting a little tired. I would love for Apple to switch to USB-C, at least on the Pro iPhone models. It would make charging easier in a multi-device world, and would open up more possibilities for accessories.

One of the most hyped design changes is the smaller notch. While it’s nice that the notch is smaller, frankly, you’ll barely notice. In day-to-day use, the display doesn’t really feel much more immersive. Other minor design tweaks include the fact that the device is slightly thicker, and the buttons on the left and right edges are a little lower. And, the phone is available in a few new colors. We’re reviewing the Gold model, and while the glossy gold frame feels a little gaudy at times, it still looks great.

While the iPhone 13’s display was only a minor upgrade over the iPhone 12’s, the Pro phones are getting a much bigger upgrade. Finally, after years of asking, the iPhone 13 Pro has a high refresh rate display. Not only that, but the display panel is one of Samsung’s high-end LTPO displays, which basically means that it can change its refresh rate depending on what’s happening on the screen, saving on battery where possible, and boosting refresh rate when necessary. Refresh rates scale between 10Hz and 120Hz.

The display itself is a 6.1-inch OLED display with an 1170 x 2532 resolution, and 1200-nit peak brightness. It looks spectacular. The screen is bright, with vibrant colors, and deep black levels. And, thanks to ProMotion, it’s incredibly responsive. Animations are smooth and lifelike, and the phone in general just feels more…natural.

Most of the time, anyway. While most standard animations and scrolling motions will automatically take advantage of the 120Hz refresh rate, some third-party developers will need to enable the higher refresh rate for custom rendering. That includes games — so if you were looking forward to using ProMotion for mobile games, you may need to wait a little.

Honestly, I don’t see this as a huge issue. Sure, I don’t game a ton on my phone, but I do occasionally. To me, animations and scrolling are where high refresh rates really matter, helping make the phone feel more touch-responsive. That said, it will be nice for all apps to eventually support the tech.

I’m thrilled ProMotion is finally available on the iPhone 13 Pro, however, I hope that lower-end iPhones get the tech in the near future.

The entire iPhone 13 series offers Apple’s new A15 Bionic chip, which is the company’s latest and greatest mobile processor. It doesn’t represent a huge upgrade over the A14 Bionic, but it is definitely a little more powerful, and keeps Apple at the front of the pack when it comes to mobile performance.

Basically, on the iPhone 13 Pro, games load super quickly, multitasking is seamless, and so on. Seriously folks, this is about as fast as you can get on a phone in 2021. More important than the fact that the phone is fast right now is the fact that it will remain fast for years to come. While we haven’t had time to test the phone for years, Apple’s track record indicates that this will indeed remain true for the iPhone 13 Pro.

Benchmark results confirmed the incredible performance on offer by the iPhone 13 Pro. The phone achieved the below results.

These results are excellent, and beat out any phone that I’ve tested in the past. That includes the standard iPhone 13, which has the same chip, but not quite as much RAM, and one less GPU core.

The iPhone 13 series gets a storage bump too. The iPhone 13 Pro starts at 128GB, like last year, but it now ranges up to a hefty 1TB. That’s more than the vast majority of users will need. If you’re good at using cloud services like iCloud, you could probably get by with 128GB.

Apple has been taking the battery a little more seriously over the past few years, and we’re glad to see it. The iPhone 13 Pro gets a longer battery life than the 12 Pro did, thanks to a series of improvements, from a more efficient processor, to the fact that the display can refresh at as low as 10Hz. The battery itself is also just…larger. According to Apple, all of these improvements will result in 1.5 hours more usage on average.

I can safely say that the battery in the iPhone 13 Pro is excellent. The device never got even close to running out of juice in a day, and that’s even with heavy usage. Most people will end the day with north of 50% battery left, and even those that game a lot and record a lot of video should still find themselves getting through a day of use.

Let’s get this out of the way right now — the camera on the iPhone 13 Pro is the best in the business. Google’s Pixel 6 is coming out soon, and could give the iPhone series a run for its money — but it has a lot of catching up to do if it wants to get close.

In good lighting, the iPhone 13 Pro is capable of delivering incredibly detailed photos with vibrant colors. That’s true no matter which camera you use. Apple has long offered extremely consistent cameras, and that remains true for the iPhone 13 Pro.

The Ultrawide camera has a hidden secret — it doubles as a macro camera. When you bring the camera close to a subject, it will switch to the ultrawide camera for macro mode, and you can see it switch. I don’t mind this at all — it never switched when I didn’t want it to. But some disagree, and Apple will be releasing a manual toggle for the feature in a future software update. The macro photos it takes are pretty solid. They’re far better than the 2-megapixel macro photos you’ll get on many Android phones. It is a Pro-only feature though — there’s no macro mode on the standard iPhone 13 Pro.

New for the iPhone 13 series is Photographic Styles. Photographic Styles essentially takes aim at the idea that different companies’ cameras have “looks.” The Pixel series, for example, has long offered a high level of contrast with arguably more vibrant colors — at the expense of looking realistic. Photographic Styles allows you to tweak how photos will turn out, meaning that you could have photos look like a Pixel, or a Samsung phone. There are built in presets, and you can create your own.

It’s not a filter system though. Rather than applying an edit to a photo after it has been taken, Photographic Styles changes how the phone itself processes images. That means that you can’t change the style after the fact. This is basically a “set it and forget it” type of feature. You’ll pick how you want images to look, and leave it at that. It’s a neat system, however as someone who likes the look of iPhone cameras, I generally kept it at the default setting. There are five defaults: Standard, Rich Contrast, Vibrant, Warm, and Cool. Apple gives those that you create a cool name to match the style too, which is a neat touch.

The other big new features for the iPhone 13 series is Cinematic Mode. Cinematic Mode could be likened to Portrait Mode for video, though it’s a little more complicated than that. The feature basically applies a software blur to the background of a video, allowing users to switch the focus point on the fly. Focus points can then be edited after you capture the video. That’s pretty cool.

You don’t necessarily have to manually switch subjects when filming. The feature can also automatically switch based on the face it sees. This may or may not work for you, depending on what you’re trying to create.

Cinematic Mode is a neat feature, but for now, it’s a little limited. It reminds me a lot of the early days of Portrait Mode. It’s a little messy around edges and hair, doesn’t work great in low light, and only works at a 1080p resolution, at 30 frames per second.

It’s important to note that while you can edit the video after capturing it, that’s only true if you’re running a Mac with MacOS Monterey, and you can only edit it in Apple’s own apps, like Photos and Final Cut Pro. If you send the file to an older Mac, for example, your phone will create a new file with the blur baked in.

The iPhone 13 Pro runs Apple’s iOS 15, the latest and greatest version of Apple’s mobile operating system. On the iPhone 13 Pro, it works excellently.

I’m not going to dive deep into iOS 15 and its new features, but I will give an overview. Some of my favorite new features include Focus modes, which may be a little messy, but prevents my iPad’s notifications from waking me up when my phone is in Sleep mode. Apple Maps also looks great, though I wish the new Maps were viewable in CarPlay. Apple says that’s coming later in the year.

Generally, if you’ve used iOS before, you won’t get many surprises on the iPhone 13 Pro.

It’s also worth considering the standard iPhone 13, but if you can afford to spend the cash on the Pro model, I would do so, considering the better display and better camera.

Should I buy the iPhone 13 Pro?

Yes. The iPhone 13 Pro offers a stunning display, excellent battery life, and the best camera in any smartphone.