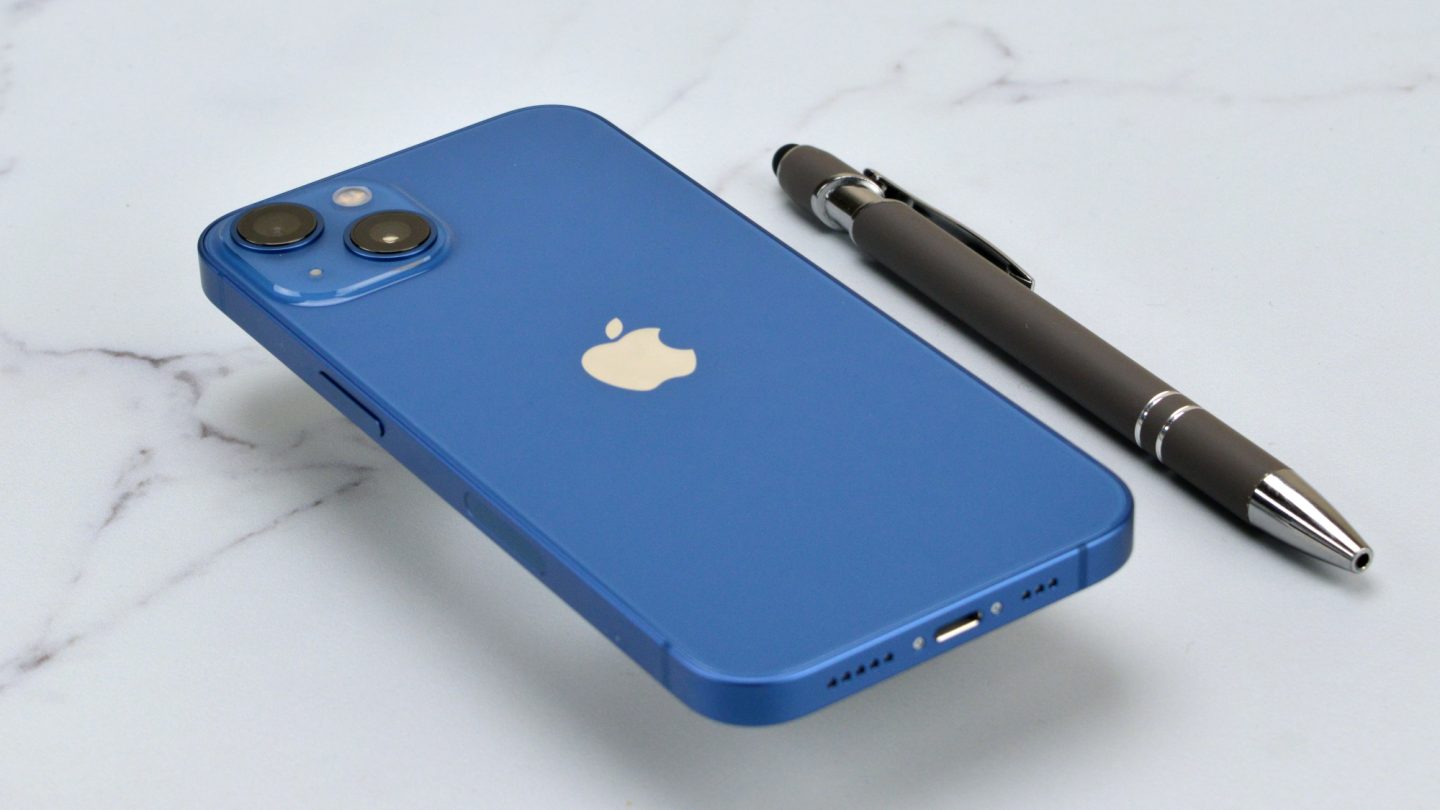 I’m far from the first to say it, but on its surface, the iPhone 13 and 13 Mini definitely feel like “S” years. That’s to say, Apple has taken the iPhone 12 from last year, and refined it a little.

But dig a little deeper, and your opinion about the importance of the changes this year might shift. While last year’s changes were mostly related to design, this year’s heavily impact the day-to-day. In my book, that’s what matters.

The improvements are meaningful too. The iPhone 13 offers a longer battery life that should easily get most through a full day. And the camera improvements cement the iPhone 13 as offering a better camera than any of the competition.

The iPhone 13 doesn’t quite reach the heights of the iPhone 13 Pro though. Does that really matter? I’ve been using the phone to find out. 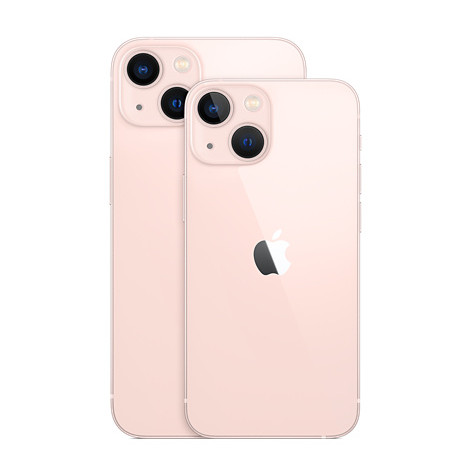 The overall look and feel of the iPhone 13 is pretty similar to last year’s iPhone 12. You’ll get the same squared-off edges and the same Lightning port on the bottom. The device is slightly thicker and heavier, but you won’t really notice.

The fact that the design is so similar isn’t a bad thing. The iPhone 13 looks great. It’s got nice, glossy glass on the back, with a matte frame around the edges, and it’s available in a variety of great colors. We’re reviewing the Blue model, which is similar to last year’s blue and looks awesome.

There are a few design changes, though they don’t really make much of an impact on day-to-day life. Because the camera sensors are a little larger, Apple has had to rearrange the camera module a little — so the cameras are now diagonally aligned instead of vertically aligned. The cameras also protrude a little more from the back of the phone.

Perhaps more important is the fact that the notch is a little smaller. You’ll notice it if you really look hard, but it has almost no impact on daily life. Hopefully, Apple will find a way to eliminate the notch altogether relatively soon.

The iPhone 13 feels great in the hand, though depending on how big your hands are that may change for you. I have relatively large hands and have no issue reaching the opposite side of the device when typing, though I normally swipe when using one hand. Those with smaller hands may want to consider the smaller iPhone 13 Mini.

The iPhone 13 Pro got a major display upgrade with the addition of ProMotion. Unfortunately, the tech didn’t make it to the standard iPhone 13 though. In other words, the display on the iPhone 13 and 13 Mini is similar to last year.

That doesn’t mean the display is sub-par though. On the contrary, the display on the iPhone 13 still looks great. For the iPhone 12, Apple finally switched to OLED tech for its non-Pro devices, and you’ll still get that this time around. That means deeper black levels and higher contrast, not to mention better power efficiency.

The 6.1-inch size is definitely big enough for most, though I’m excited at the rumors that Apple may ditch the Mini next year in favor of an “iPhone 14 Max.”

The screen gets more than bright enough for most. It reaches a peak brightness of 1200 nits, with a typical brightness of 800 nits. That’s up from a little over 600 nits on the iPhone 12. It’s easy to see the iPhone 13’s display in even direct sunlight, which is very helpful.

All four iPhone 13 devices offer Apple’s new A15 Bionic chip, and they’re the best-performing iPhones to date. In other words, in day-to-day use, they feel about as responsive as the iPhone 12 series did.

That’s a good thing. Apple seems to be far ahead of the competition when it comes to iPhone performance, and the result is that iPhones don’t start feeling slow until years after they’re released. Games load quickly, multitasking is easy, and I never had an app crash.

Benchmark results confirm the excellent performance. Here are the results we achieved with the iPhone 13.

These are excellent results, and beat any Android phone we’ve ever tested. They also beat any other iPhone though improvements over the iPhone 12, which achieved 1591 in GeekBench 5’s single-core score, were modest.

The iPhone 13 gets a storage bump too. Now, the base model of the iPhone gets 128GB of storage, up from 64GB. That’s good news for those who store lots of apps and files on their device.

One of the big improvements in the iPhone 13 comes in the form of a longer battery life. According to Apple, the battery in the device should last 1.5 hours long in average use, compared to the iPhone 12. That seems about right, but could actually end up being on the low side — most people should see a serious battery improvement.

In our usage, we found that the iPhone 13 was easily able to last a full day of even relatively heavy use, with room to spare at the end. We think most should get the same results.

The device offers similar charging tech to the iPhone 12. You’ll get support for Qi wireless charging, with support for MagSafe. The device also supports fast charging at up to 20W with Apple’s charger, and while it doesn’t come close to the speeds of some Android phones, it should be fast enough for most.

The biggest improvements come to the main camera sensor, which has gotten the same sensor-shift technology previously only available on the iPhone 12 Pro Max. That’s good news — last year, the iPhone 12 Pro Max’s camera was in a league of its own. Now, you can get the same quality no matter which iPhone 13 you buy.

In normal use, the device delivers crisp, detailed images with vibrant colors. You’ll get excellent images in well-lit environments, and in night shots, and the camera is able to easily focus on the subject in a split second.

For iOS 15, Apple has added new “Photographic Styles,” which essentially allows you to tweak the look of images by default. The system actually uses AI to tweak how the phone processes images — so it’s not exactly a filter. It also means that you can’t change the style after you have taken the photo — though you can change Styles for future photos whenever you want.

The system works pretty well, and it makes the iPhone camera more versatile than ever. The likes of Google and Samsung have long had their own “look” on their smartphone cameras. Now, your iPhone can recreate those looks. That said, in personal use, I stuck to the default setting. I like how the iPhone’s camera looks.

The front-facing camera looks pretty good too. It’s unchanged from last year, though it may benefit a little from better image processing.

The iPhone was already the best in the business at the video, but it’s gotten even better this year. Because of the sensor-shift tech, the stabilization tech has improved too.

Of course, the headline video feature is the new Cinematic Mode, which allows you to quickly and easily change the focus of the camera as your filming — and edit it right after you take the video. It’s fun to play with, but it doesn’t work super well in low light, and even well-lit videos don’t quite look right just yet. It reminds me a lot of the early days of Portrait Mode. Now, Portrait Mode looks awesome — but it struggled early on. I assume that Cinematic Mode will look a whole lot better in a few years. Hopefully, you’ll be able to use it at higher resolutions too — for now, it’s limited to 1,080p at 30 frames per second. And, hopefully, it’ll get better at taking video of non-human subjects.

Cinematic Mode and Photographic Styles may or may not appeal to you. Ultimately, however, whether you use them or not, the iPhone 13 has an incredible camera system. Photos and videos simply look awesome.

The iPhone 13 gets Apple’s latest and greatest mobile operating system — iOS 15. iOS 15 adds a number of new features to the iPhone that make it more versatile than ever, and generally, it builds on what users already love about iOS. Headline features include the likes of Focus modes, which sync across your devices, however many of the biggest features that Apple announced at WDDC aren’t available at launch. They should be in future versions of iOS.

In my opinion, the iPhone 13 is a bigger update to the series than the iPhone 12 was. The iPhone 12 represented a major design update, and one that I’m glad has stuck around. But the iPhone 13 offers improvements where it really counts — the battery, and the camera.

It doesn’t make much sense to compare iPhones to Android devices these days. The iPhone 13’s biggest competition comes from Apple itself. If you have an iPhone 12, don’t bother with this year’s model. The improvements are here, but not enough to buy a whole new phone. If, however, you have an iPhone 11, and can afford a new phone, you may want to consider the iPhone 12.

If you’re trying to decide between buying an iPhone 12 and an iPhone 13, we recommend going for the newer device. It’s not that much more expensive, but the camera and battery are a little better, and worth that extra cash. For more, check out our full comparison.

Should I buy the iPhone 13?

Yes. The iPhone 13 is an excellent phone with a great camera, long-lasting battery, and that loved iOS software experience.