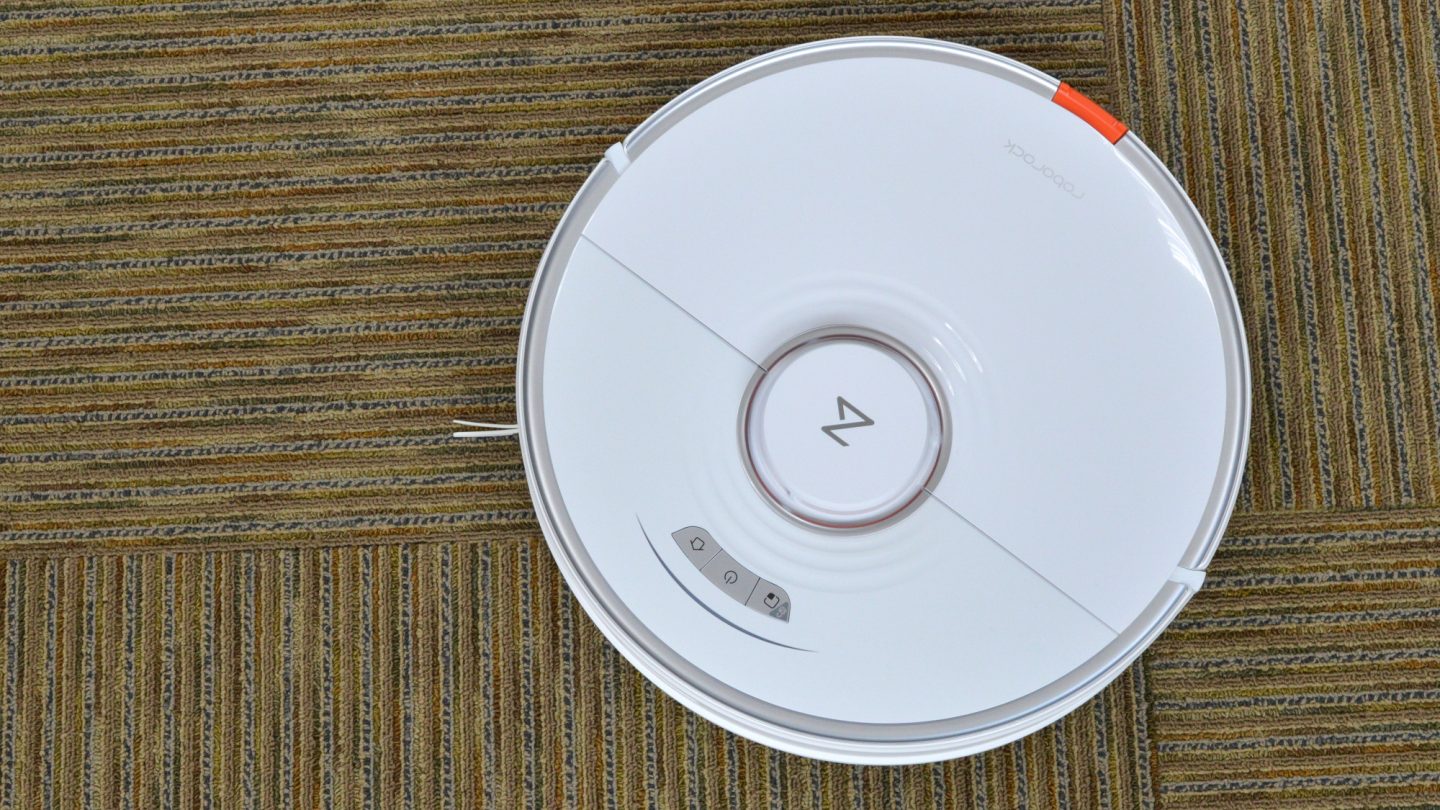 Robotic vacuums are getting a whole lot better. Roborock has been building them for a while now, and its higher-end options are arguably the best in the business. Recently, we reviewed the Roborock S6 MaxV and loved it. But there’s a step up from that model. There’s a robotic vacuum that’s even more expensive, and even better: The Roborock S7+.

As mentioned, the Roborock S7+ is not cheap. While the non-plus model comes in at an already expensive $650, the S7+ steps up the price to an eye-watering $950. Is the Roborock S7+ worth the cash? Or should you save some money for a more modest robotic vacuum? I’ve been using the Roborock S7+ to find out. 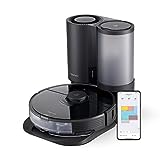 If you’ve seen a robotic vacuum before, the overall design of the Roborock S7+ won’t surprise you. The vacuum is round and around 13.8 inches wide, and 3.8 inches tall. It’s a bit larger than some other robotic vacuums, but still not overly large.

The Roborock S7+ is available in black and white, and both look decent. We’re reviewing the white model, which looks fine, however, I would have preferred the black model given it would have looked a little more subtle.

On the top of the device, you’ll get three buttons. There’s a Dock button, which returns the vacuum to the dock; a power button, which can be pressed once to clean, or held to power the device on or off; and a spot clean button. It’s pretty simple, however, generally, I used the controls in the app instead of on the device itself.

Then there’s the dock. With the Roborock S7+, you’ll get Roborock’s Auto Empty Dock. It has a large dust bin and can store much more dust than the vacuum itself. When the vacuum returns to the dock, it’ll suck up the dust from inside the vacuum, and collect it until you empty it. During the review period, I didn’t have to empty the dock once. Generally, it should last at least a few weeks or more of usage. It’s nice to get, but may not be necessary for some, especially given the fact that it adds $300 to the price of the vacuum. It’s also pretty large, so you’ll have to find a good spot for it in your home.

The vacuum has a few different accessories and components that you’ll remove from time to time. Of course, there’s the dust bin, which can be found under a hatch on the back of the vacuum and is easy to do so. There’s also a water tank for the mopping function, and the mop pad itself. Unlike other robotic vacuums, the Roborock S7 can raise the mop pad as needed, meaning you can keep it attached to the vacuum at all times, if you want.

Setting up the Roborock S7+ is pretty simple. You’ll start by downloading the app and signing in to your account or creating a new one. Then, select the button to add a new device, select the vacuum, and follow the on-screen instructions. During the process, you’ll have to connect to your Robot’s own Wi-Fi network, which is the only slightly complicated part, as it can fail to work sometimes. I had no issues with it though.

The Roborock app is great. I have two Roborock vacuums — one of which is at my office. It’s easy to switch between the two and add more if needed.

Most will only have one vacuum, and it’s easy to tweak the settings, look at the vacuum’s map, and more. In the app, you can set the device to quickly clean a small area, in case of a spill. Or, set it to clean a whole room. You can also set where the vacuum should vacuum and mop, and in case you forget, the device has automatic carpet detection.

While the app is well-designed, you may find yourself digging around to find certain settings. That’s due to the fact that it’s so feature-packed. There are settings to schedule cleaning, remotely control the vacuum, see your cleaning history, and more. And, the app will show you maintenance schedules — so you can know exactly when you need to replace things like the brushes, filters, and mop.

Generally, I found the Roborock S7+ to offer excellent vacuuming performance. The device uses LiDAR for mapping, and it’ll map your area during the first clean. After that, it can use the map to determine the best route for cleaning. That usually involves cleaning around the edges of a room, then working in a pattern to clean the inside. Smart.

The vacuum seemed to be careful around obstacles too. It slows down as it approaches an obstacle, then softly touches it and moves back. This means that it won’t really move things like stools and other light furniture. That said, if you have something fragile on furniture like an end-table, for example, you should set a “no-go zone” in the app to avoid the vacuum even touching that furniture.

The device was easily able to pick up almost all of a simulated baking disaster, which included flour and sugar all over the floor. A few remnants were left over, but the device picked that up on a second go. Accessories like the brush were also pretty easy to remove to clean hair off, which will wrap around the brush.

The mopping function on the Roborock S7 is far more convenient than other robotic vacuums. On the Roborock S6 MaxV, the mop pad has to be installed or removed depending on whether or not you want to mop. On the S7+, it can raise or lower automatically to mop or not, meaning that you have to interact with it a whole lot less. That’s super helpful.

The vacuum is able to mop and vacuum at the same time, and it performed excellently when mopping. In the app, you can choose either Standard Mopping or Deep Mopping, which involves the vacuum moving in a tighter formation, and mopping an area twice. You can’t vacuum when in that mode, however.

Roborock says that the device uses Sonic Mopping technology to scrub the floors at between 1,650 and 3,000 times per minute. That’s faster than most of the competition, and while it’s hard to tell the exact effect of it, the device was indeed excellent at mopping. 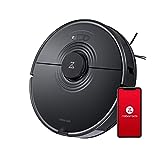 Roborock says that you should run the mop pad under water before mopping. That ensures that it’s wet when you start cleaning. I wanted to let the device clean on its own while I was working, so I did not do that. I found that the mop wasn’t wet at the start of the cleaning process, so it didn’t effectively mop a few feet worth of cleaning. After that, however, it had trickled enough water onto the mop pad to clean well. Ultimately, it may clean slightly quicker if you wet the pad, but if you don’t, it should still do the job decently well.

Ultimately, I found the Roborock S7+ to be good enough at mopping for day-to-day cleaning. It won’t, however, handle super large or very sticky cleans. You should still clean those yourself.

The Roborock S7+ is an excellent robotic vacuum. It’s easily powerful enough for the vast majority of basic cleaning tasks. And it’s easy to integrate into your cleaning routine, thanks to the scheduling features. Thanks to the raised mop pad, it requires less human interaction than most other robotic vacuums, which is very helpful.

It’s worth considering the Roborock S7 instead of the S7+. The S7 comes with a charging dock that doesn’t have a dust bin, so you’ll have to empty the dust bin in the vacuum itself much more frequently. But the trade-off is that you’ll save $300. That said, if you can afford the extra cash, the external dust bin is absolutely convenient.

Ultimately, if you want an all-in-one vacuuming and mopping vacuum, the Roborock S7 and S7+ are the best out there. If you don’t need mopping, however, it’s worth considering the Roborock S4, which still offers excellent vacuuming functionality.

Should I buy the Roborock S7+?

Yes. If you can afford to spend this much cash on a robotic vacuum, the Roborock S7+ is among the best out there.