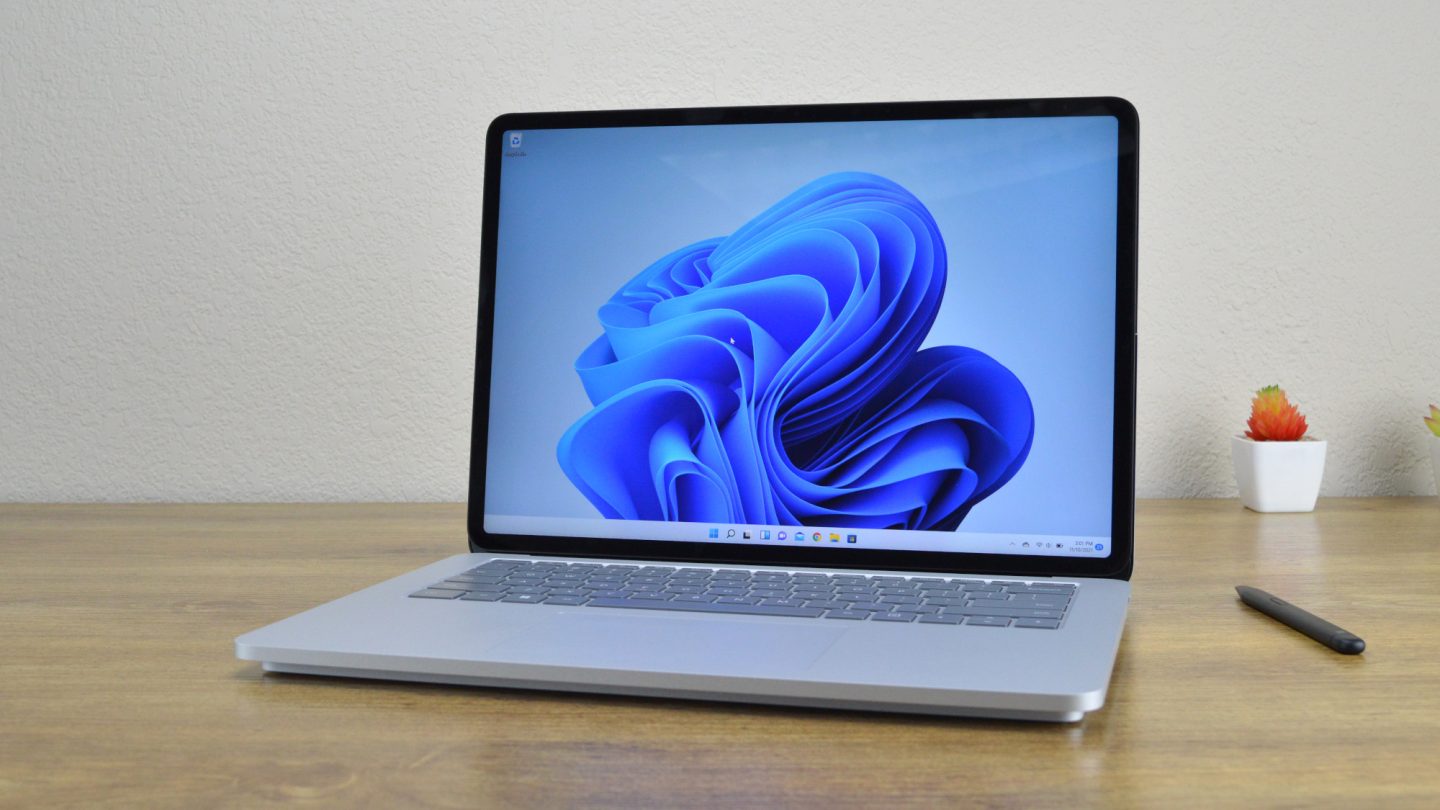 Microsoft has been a serious hardware player for some time now. While there was once a time when the company only really licensed Windows to third-party companies, these days, the Surface line offers some of the best products in the business. The Surface Laptop Studio, however, is a bit of a weird offering from the company — taking the previous-generation Surface Laptop, and combining it with the high-end Surface Studio convertible desktop.

The laptop is billed as a high-end offering from Microsoft, and while it’s certainly cool, it can be difficult to know if it’s the right laptop for you. Ultimately, the Surface Studio seems to be targeted at creators — like visual artists and graphic designers. But what if you’re a gamer? Or, what if you just want a solid productivity-focused machine? 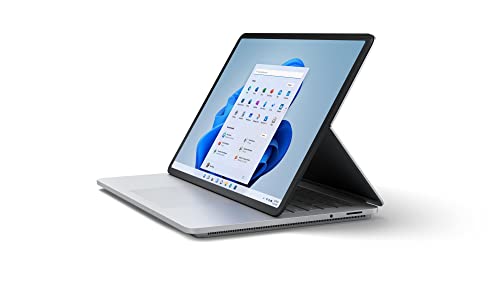 There are a few things that make the overall design of the Surface Laptop Studio unique. Out of the box, it looks mostly like a normal laptop. It has a silver aluminum build, with a gray keyboard and black bezels around the display. On the back of the lid, you’ll get a glossy silver Microsoft logo. Around the edges, there are two Thunderbolt 4 ports, a headphone jack, and a Microsoft Surface Connector port. It’s not a huge selection, and more ports would have been appreciated.

But look a little closer to the Surface Laptop Studio, and you’ll see some differences between it and other laptops. The most immediately obvious difference is the somewhat large base on the bottom, which is indented from the rest of the laptop, kind of raising it up. It looks a little funky in images, and you can see it when you carry the device around. But you’ll forget it exists when you’re actually using it. The indent also serves as a location to charge the Surface Slim Pen 2, if you get one. You will have to lift the laptop up to actually get the pen out, which is a little weird. But it’s not a huge deal, and I like the fact that it can be stored there. And, it’s where you’ll find speaker grills. We’ll get into speaker quality a little later.

With the base, the Surface Laptop Studio is definitely a little thicker than some of the competition, but it’s not overly thick. It measures in at around 0.75 inches thick, compared to the MacBook Pro’s 0.61-inch thickness, for example. Again, however, it’s not too thick, and it’s still pretty easy to carry around and slip into a backpack.

You might notice that the lid of the laptop is a little thicker than some others too. The second, and more important, different in design between the Surface Laptop Studio and other laptops is that the display can fold down over the keyboard. There’s a hinge around halfway up the back of the laptop’s display, which allows the actual display to fold down, or fold back. It’s an interesting take on the convertible, and I much prefer it to a 360-degree hinge, which is now most convertibles enter laptop mode. It means you can use tablet mode without having to pick the laptop up.

No matter which position you use the device in, it magnetically snaps into place, which is nice. There’s a set of magnets right under the display to set it in tent mode, and there’s another set at the back of the hinge for tablet mode. In tablet mode, there is a little give under the bottom of the display, but you can’t feel it unless you really press down.

Of course, calling it “tablet mode” might be a bit misleading. The laptop is way too heavy to be used as a tablet, like you might an iPad. Instead, it’s built so that it can rest on a desk.

While the Surface Laptop Studio was released before the new MacBook Pro, I’m reviewing it after — and I can’t help but feel like the bezels feel a little chunky. In a world with the Dell XPS and new MacBook Pro, I would have liked Microsoft to slim down the bezels a little. They’re not obscenely big, but still larger than they should be in 2021. We’ll get into the display quality a little more later.

The touchpad and keyboard are both excellent. The keyboard offers plenty of travel and a nice click to each key, plus spacing is relatively comfortable and easy to get around. As someone who types for a living, I really enjoyed using the keyboard on the Surface Laptop Studio. The keyboard is backlit, as you would expect from a device in this price range.

The trackpad is very good too. It’s nice and large, and even on the edges and corners, it’s pretty accurate. Really, I have no complaints with the keyboard and trackpad on the Surface Laptop Studio. I appreciate how much work Microsoft has put into catching up with Apple here.

They’re not, however, as good as the speakers on the new MacBook Pro, which are stellar. Apple has been leading the class in laptop speakers for some time now, and the Surface Laptop Studio doesn’t do enough to change that. Bass response simply isn’t as deep or as impressive, while detail is only fine. Again, it gets loud enough for most, and will definitely do the job for things like video calls and listening to podcasts. But if you want to listen to music with any detail, I recommend using a decent pair of headphones or external speakers.

The display on the Surface Laptop Studio is great. The display measures 14.3 inches, and it has a resolution of 2400 x 1600, with a refresh rate of up to 120Hz. The screen gets nice and bright, colors are vibrant and relatively accurate, and the high refresh rate helps make for a smoother experience, including when drawing using the Pen. Those that regularly use styluses for digital design will appreciate that smoothness — it got close to feeling natural for me.

The display is a touch screen, and I found the touch controls to be very accurate. Palm rejection is very good too — so you can rest your hand on the screen while using the pen, without having to worry too much about accidentally controlling the device.

Like other Surface devices, the Surface Laptop Studio has a 3:2 aspect ratio, which means that you’ll see plenty of information on the screen at once. I don’t really need the extra screen height, but certainly didn’t find it to be a bad thing.

The webcam on the Surface Laptop Studio is a 2-megapixel 1,080p webcam, and it’s only fine. It’s definitely good enough for video calls, though it did redden my skin a little. It supports Windows Hello though, which I still love as a way to access a computer.

To be clear, in most day-to-day use, the Surface Laptop Studio performs fine. In a work day, which involves having Mail, Slack, and up to a few dozen Chrome tabs open, the device easily kept up. But in more demanding situations, it can start to suffer. The device features a 32W quad-core processor, not a six-core or eight-core processor like you’ll find on some other options in this price range. And, the graphics card is up to an RTX 3050 Ti, which is fine for most situations, but not the workhorse that some might want. The device isn’t really built for gaming, though.

The base model of the laptop offers an 11th-generation Intel Core i5 processor, with 16GB of RAM and Intel Iris X graphics. It can be upgraded to offer an Intel Core i7 with 32GB of RAM and an RTX 3050 Ti graphics card. Our unit, however, is a little different — it’s an enterprise model, which swaps the 3050Ti out for an RTX A2000. In total, our unit would cost a hefty $3,400, which is not cheap.

Benchmark results confirm the solid yet slightly underpowered performance. Our model scored the following results. Keep in mind, our RTX A2000-equipped model is not available to consumers.

These results are fine, but not quite what we would expect from a computer in this price range. The results didn’t even get close to an M1 Pro-equipped MacBook Pro, but they also didn’t quite reach the heights of the Dell XPS 13 or XPS 17. In fact, they were about on-par with the Dell Inspiron 14, with an AMD Ryzen 7 5700U, which isn’t great.

The battery on the Microsoft Surface Laptop Studio is pretty good. After working for around 4 hours at full brightness, with a second display connected through HDMI, the laptop had around 30% left. That’s not terrible, though I definitely wouldn’t have been able to get through a full work day in this setup. But without the external display, and at normal brightnesses, I likely would have gotten through a full day and then some.

The battery capacity itself sits in at 58Wh, which Microsoft says should give the device up to “18 hours of typical device usage.” I don’t see that being realistic. But I do think the battery will be long enough for most users.

As mentioned, the Surface Laptop Studio works with some extra accessories, chief among those being the $130 Surface Slim Pen 2. The pen works pretty well. The high refresh rate display helps make it feel smooth and natural, and it’s relatively comfortable to hold. That said, I’m not much of an artist, so it’s hard to really speak to its quality for graphic design and digital art.

The Microsoft Surface Laptop Studio is far from a gimmick. Even if it wasn’t a convertible, it would be a great laptop, with a solid keyboard, and nice-looking design. Add in the ability to convert the display, and you have a great product on your hand.

But it’s pretty expensive, doesn’t perform as well as it should, and is definitely not for everyone. If you think you could really get use out of the display tech, and don’t mind what is a relatively hefty laptop that doesn’t match the performance on offer by other machines in this price range, then it’s probably worth buying. If, however, you just want a solid laptop for productivity, it’s probably worth considering the Surface Laptop 4 instead, which starts at a much more stomachable $900.

If you’re a little more open to other companies, there are tons of other options. If you’re really open, I recommend checking out the new MacBook Pro. It’s more expensive, but it’s truly an incredible machine. Alternatively, it might be worth looking into machines from companies like MSI, which have emphasized creators over the past few years.

Most Surface Laptop Studio customers should also consider the Dell XPS 15. The XPS 15 offers a bit more performance for a slightly lower price. You won’t get the same fancy display, nor the same Microsoft hardware experience. But the XPS series has been at the top of the game for a reason.

Should I buy the Microsoft Surface Laptop Studio?

Yes, if you want a creator-focused laptop and don’t mind spending the cash.