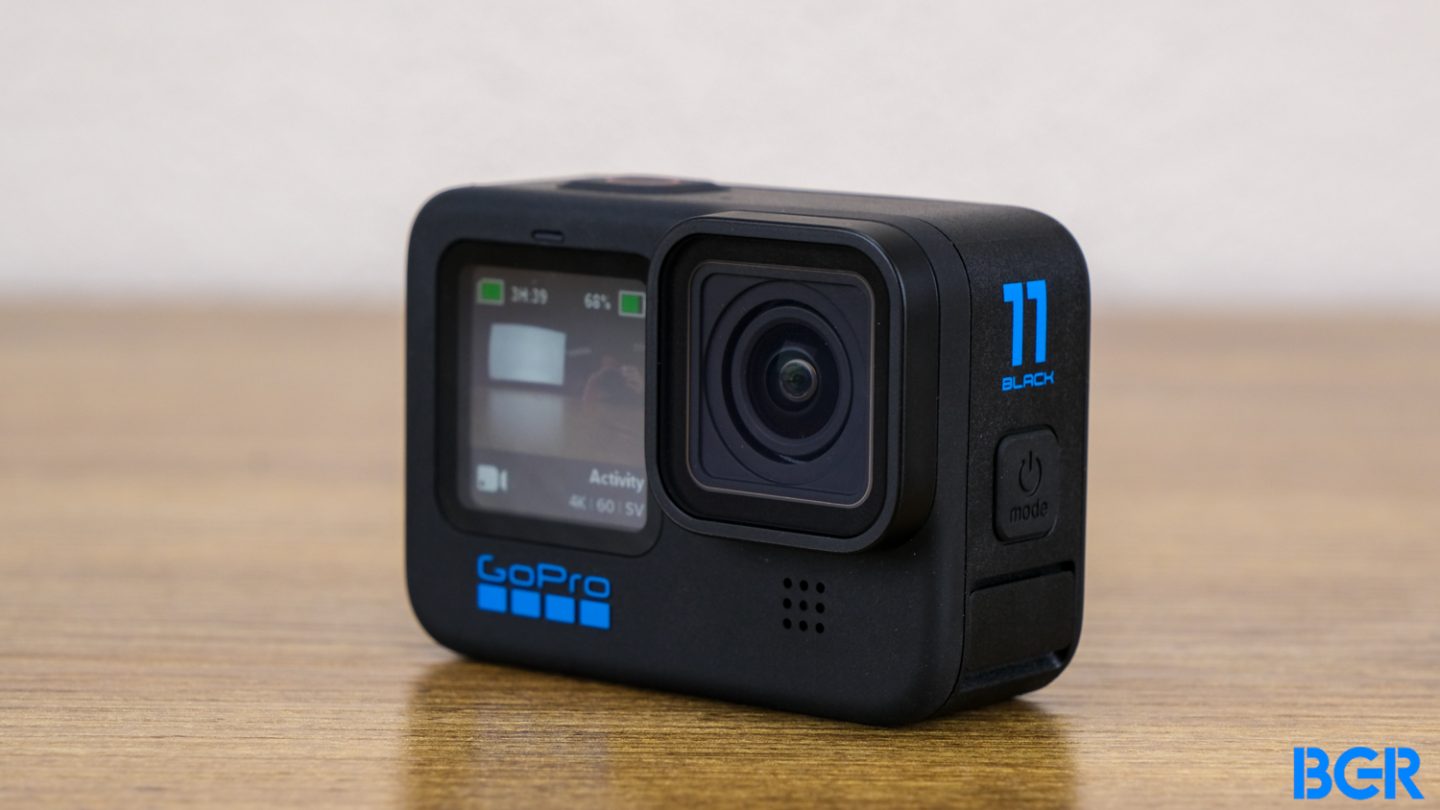 GoPro has been synonymous with action cameras for years now, and while the company has seen some competition from the likes of DJI, the reality is that most who want a GoPro-like device still end up just buying a GoPro. Part of how the company has achieved this is by iterating on the concept over and over — and that’s where the latest model, the GoPro Hero11 Black, comes in.

The GoPro Hero11 Black launched alongside the new GoPro Hero11 Mini, but is still the go-to for those who want a high-end action cam experience. It doesn’t look all that different from the original GoPro Hero10 Black, but under the hood, it offers a number of tweaks and improvements. It’s the best GoPro ever released — and should be considered by anyone in the market for a new action cam.

Here’s what makes the GoPro Hero11 Black such a great option.

The GoPro Hero11 Black offers a number of refinements over the Hero10 Black, and secures its place as the best action camera out there right now. 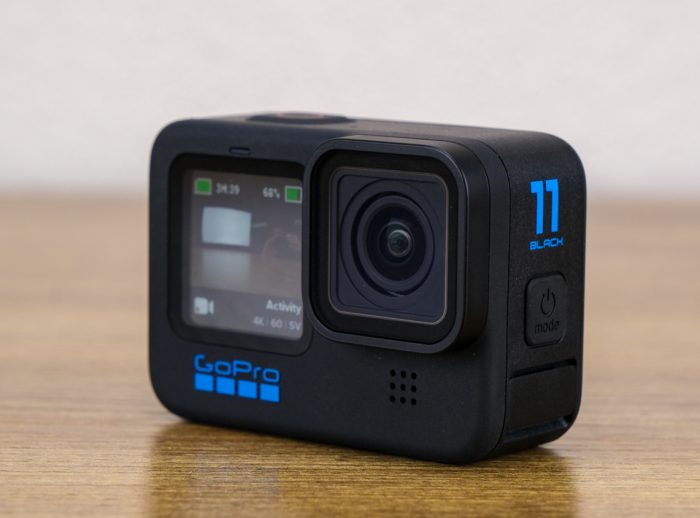 On the front of the GoPro Hero11 Black, you’ll find the camera lens, which has the same removable lens cover as the GoPro Hero10 Black — meaning you can swap lens covers out if needed. This lens cover has GoPro’s hydro-repellant coating, ensuring that water drops don’t cover the lens as you film. It works super well.

The main display, of course, is found on the back of the device. It’s a 2.27-inch touch display with the same touch sensitivity as the Hero10 Black. I found the display to indeed be very responsive and easy to use.

Like previous-generation models, the Hero11 Black has a power button on the right side (when looking at the front), and a record button on the top. When the device is off, you can hold the record button to have it power on and immediately start recording, and it’ll turn itself off when you stop. It’s a neat feature.

Lastly, on the left side is where you’ll find the door for the battery, MicroSD card slot, and USB-C port. It’s the same setup as before and works fine.

The software on the GoPro Hero11 Black, thankfully, is relatively easy to use. Like anything, it’ll take a little getting used to — but if you’ve used a GoPro before, you’ll have no trouble navigating the interface of the device.

The main screen will show information like the speed of recording, the shooting mode, battery level, and so on. Swipe to the left or right on the majority of the window, and you can change between Time Lapse, Video, and Photo modes. And, you can tap on the buttons on the bottom left and bottom right to change different settings.

The device can actually get much more advanced than that too. You can swipe down from the top edge of the display to access a menu of options, and you can customize presets on offer to quickly start recording in the format that you want. And, the software will rotate when you rotate the device, like on a phone — so you can see what you’re doing if you want to shoot in portrait orientation.

You don’t have to do everything from the actual GoPro, if you don’t want to — there’s an accompanying app called Quik, which can be used to preview video, change settings, start recording, and more. Basically the app can control anything that you would want, including recording settings.

Perhaps one of the most useful things about the Quik app is the fact that you can preview footage recorded on the GoPro without needing to take the MicroSD card out of the device. You can even turn the device on and off from the app, which is pretty cool.

The Quik app also allows you to automatically upload video to the cloud, and there’s an Auto Clear option that will clear your SD card after video has ben uploaded. It also boasts some great editing tools, filters, and more. Some of these features will require a GoPro Subscription though, which comes at $49.99 per year.

Generally, I found the Quik app to be well-designed and easy to navigate. Not everyone will make full use of the app, but if you’re willing to learn how to properly use it, you’ll appreciate everything that’s on offer.

Of course, the most important aspect of the GoPro Hero11 Black is its video quality, and the camera offers a ton of upgrades over the previous-generation GoPro Hero10 Black. Notably, it has a new, larger sensor with an 8:7 aspect ratio, which allows for better image stabilization. It also now supports 10-bit color, which is a huge upgrade over the previous-generation 8-bit cameras, and basically means that the camera can capture up to 10 billion colors. That means less banding, and a more realistic image overall.

Like the previous-generation camera, the GoPro Hero11 Black can capture up to 5.3K video, but unlike the Hero10 Black, it can use the full sensor for 8:7 video. And, the camera has GoPro’s new HyperSmooth 5.0 tech, which keeps footage straight even if the camera rotates a full 360 degrees. You can capture footage in HyperSmooth 5.0 at 5.3K at 60 frames per second, 4K120, and at 2.7K240.

Generally, video captured on the GoPro Hero11 Black looks excellent. Support for 10-bit color really does help make for a more vibrant viewing experience, and as before, the camera also supports HDR for better dynamic range. I do wish that Gopro would adopt Dolby Vision support — I’m used to those bright highlights as an iPhone user. But regardless, this captures the best-looking video of any GoPro, ever.

One of the standout new features is GoPro’s new HyperSmooth 5.0 tech, which allows for even better stabilization than previous-generation GoPro devices. In particular, GoPro notes that video captured in 4:3 and SuperView should be more stable — and I found that even on a relatively shaky bike ride, the video captured was quite smooth.

The camera comes with GoPro’s great Enduro battery out of the box, and GoPro says that should it should be able to record up to 137 minutes of video — though that’s at 1,080p. Even at 5K30, however, the camera should last an impressive 80 minutes — up from 73 minutes on the GoPro Hero10 Black.

The GoPro Hero11 Black brings a number of great improvements to the series, making for even better video capture, smoother footage, and more. It’s probably not worth an upgrade from the Hero10 Black, but if you’re running an older GoPro that you use a lot, or want your first action cam, the GoPro Hero11 Black is an excellent option.

GoPro still rules the roost when it comes to action cams. The likes of DJI have attempted to enter the game over the past few years, and while the DJI Action 2 is an excellent camera, it’s still hard to beat GoPro’s ecosystem and video quality. If you want the best action cam right now, go for the GoPro Hero11 Black.

Should I buy the GoPro Hero11 Black Creator Edition?