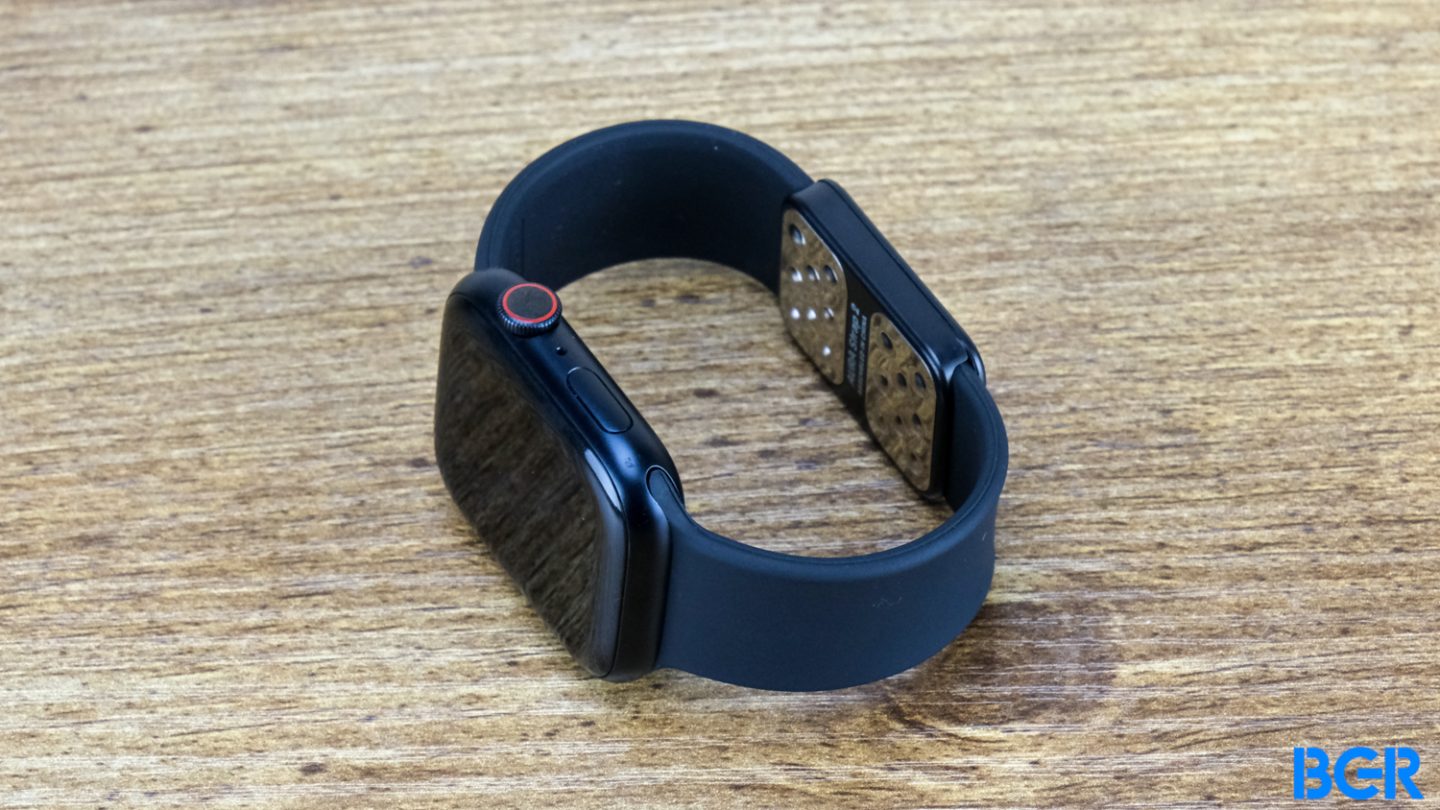 Health and fitness tracking is getting more advanced. While there was once a time when heart rate monitoring was considered high-tech, the miniaturization of sensors has made for a boon in personalized health tracking. The latest feature seems to be body composition tracking, which allows users to get a better idea of their body’s makeup without expensive and invasive tests.

To date, a number of devices have been released that track body composition — and perhaps the most famous of those are smart scales, like the Withings Body Cardio. Recently, we’ve finally been seeing wearables that can track this though — like the Samsung Galaxy Watch 4. Now, Apple users can get that wearable body composition experience though — with the new Aura Strap 2, which is a strap for your Apple Watch.

The Aura Strap 2 builds on the last generation Aura Strap, offering a slimmer build. Alongside the strap, Aura is launching a subscription too, in the form of the Aura Plus Subscription. But Aura has an uphill battle ahead of it — given the fact that plenty of smart scales offer body composition tracking, and the fact that sooner or later, Apple may introduce this feature itself. Until then, is the Aura Strap 2 worth buying?

The Aura Strap 2 is sleeker and smaller than before, plus it works with a well-designed app and isn’t overly expensive. 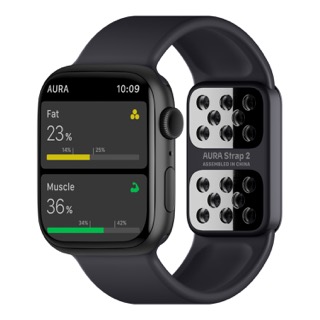 The Aura Strap 2 has a number of design differences, and while some of them make the strap better, in my opinion, others are a step back.

First, the good. The actual tracker built into the Aura Strap 2 is 20% slimmer than the last generation, and 5% narrower. That makes it more comfortable to wear, and less noticeable overall, which is good news for those who don’t like wearing bulky devices on their wrist. On the module, you’ll see two plates that face your wrist, and two electrodes on the back that you’ll use when taking a measurement.

The step back, however, comes in the form of the band itself. While the original Aura Strap offered an adjustable band that looks similar to Apple’s Sport Loop, the new one instead offers an unadjustable Solo Loop style. Thankfully, there are different sizes in the box, and you can swap them out. But the Solo Loop style makes the Watch in general much harder to slide onto the wrist and forces those with large hands to install a strap that’s large enough to slip over their hands, but too large for their wrist.

Generally, the Aura Strap 2 isn’t ugly or badly designed, but it’s definitely designed for form over function. An adjustable strap would have been nice — or at least an option for one.

Setting up the Aura Strap 2 is easy in theory, but I had some issues during the setup process. You’ll start by downloading the Aura app on your iPhone, then installing the accompanying app on your Apple Watch. Then, with the strap attached and on, follow the on-screen instructions to take your first reading. During this process, of course, you’ll need to set up an account.

I did have some issues taking my first reading. After uninstalling and re-installing the apps, and restarting both my phone and watch, I was still unable to take a reading. After I took the battery out of the Aura Strap and re-installed it, I was able to take my first reading successfully. But these issues turned out to be a common occurrence for me.

Actually using the Aura Strap 2, assuming everything is working as it should, is very easy. I had a few more issues even after I took the first reading though.

To take a reading, you’ll open the Aura app on your watch, then press your palm to the electrodes on the bottom of the strap. You’ll need to make sure your hands don’t touch when you do this, or else the reading will fail, and you’ll have to try again.

Even with my hands not touching, however, I was routinely told the reading had failed, and the message was always “Don’t take your hands off the contacts during the measurement.” Only problem? I didn’t take my hands off the contacts. This wouldn’t be a huge issue if it was only occasional, but I had to try many times every time I wanted to take a reading. In fact, Aura sent me a second unit to try in case the strap itself was at fault — and I still had the exact same issue. This was frustrating enough to cause me to not want to use the strap at all.

The actual features on offer by the Aura Strap 2 are pretty helpful, though for many, not necessarily worth subscribing to a $10-per-month service for. Thankfully, you’ll get the basics with or without a subscription.

At its core, the Aura Strap is built to allow you to get a deeper understanding of your body composition and makeup. This can be helpful if you have goals around your health and fitness, or, if you’re like me, just like to capture as much data about your health as possible.

When you take a reading, you’ll be able to see what percentage of your body is fat, muscle, water, visceral fat, protein, and minerals, which is basically bone. It’s presented in a way that’s easy to read and understand, too. And, I’ll echo Victoria Song’s review on The Verge in saying that it doesn’t seem to simply push you to lose weight, like many other health-related apps, which is great to see.

Another thing that I really like is that you can tap on each metric for a more detailed breakdown. You’ll be able to see where you are compared to other users, and get an explanation about the particular metric.

I mentioned a subscription, and it is worth noting. The subscription might be helpful for those interested in achieving health goals. For example, I selected that I wanted an “athletic” body type, and was told that to achieve that I should increase calories and protein, and add stretching exercises to my workouts.

Personal health trackers are never as accurate as medical-grade devices, but I did find myself a little concerned about the accuracy of the Aura Strap 2. For example, my Withings Body Cardio says that my body fat is around 12%, while the Aura Strap consistently noted that it was around 17%. A small margin of error is expected, but 5% seems a little high. I’m not certain that the Aura Strap is the device that’s off, mind you — it’s entirely possible that they’re both off or that the scale is wrong.

Not only that, but my Body Cardio scale says that my muscle mass is 83.2%, while the Aura Strap 2 says it’s 44%. Clearly, they’re measuring something different, but as a non-biologist, it’s hard to know what the difference between what they’re measuring.

Regardless, keep in mind that the Aura Strap 2 is not a medical device, and is more meant to give you an idea of your body’s overall makeup and trends over time.

The actual app is pretty well-designed and easy to understand. That’s true of both the iPhone and the Apple Watch versions of the app. On the iPhone, you’ll get a “Body” tab, which shows you a breakdown of all your latest measurements, allowing you to tap on each metric for more information.

The other tabs let you see recent activity and start workouts to track. And, there’s a Settings tab that lets you manage your account.

While the app is easy to navigate, I did find it to be slightly buggy at times. I never ran into any major bugs, but there were a few glitches and hiccups along the way.

The Apple Watch app is basically a stripped-down version of the “Body” tab in the iPhone app. You’ll get a rundown of each recent measurement, and tapping each measurement will show you an explanation of what’s being measured.

Many of the metrics that the Aura Strap 2 tracks can be integrated with Apple Health, which is good news for Apple users. You’ll be able to send information about your body fat, BMI, lean body mass, and more — information that you can’t get with the Apple Watch alone. Unfortunately, Apple Health doesn’t yet support metrics like muscle mass, so you won’t be able to see all metrics in the Health app.

The Aura Strap 2 is an interesting tracker that integrates well with the Apple ecosystem and gives you access to more measurements than you get on the Apple Watch alone. If you have a smart scale that offers a body composition feature, then you probably don’t need the Aura Strap — and I would argue that many should go for a smart scale over the strap. But if you like the idea of a body composition tracker that’s always with you, you might like the Aura Strap 2, assuming it works properly.

There’s no competition in this niche. That’s to say, this is the best way to track body composition with your Apple Watch right now. Perhaps the real competition comes from smart scales like the Withings Body Cardio, which I consider a better buy than the Aura Strap 2 at the same price.

Should I buy the Aura Strap 2?

No. You should get a smart scale instead.