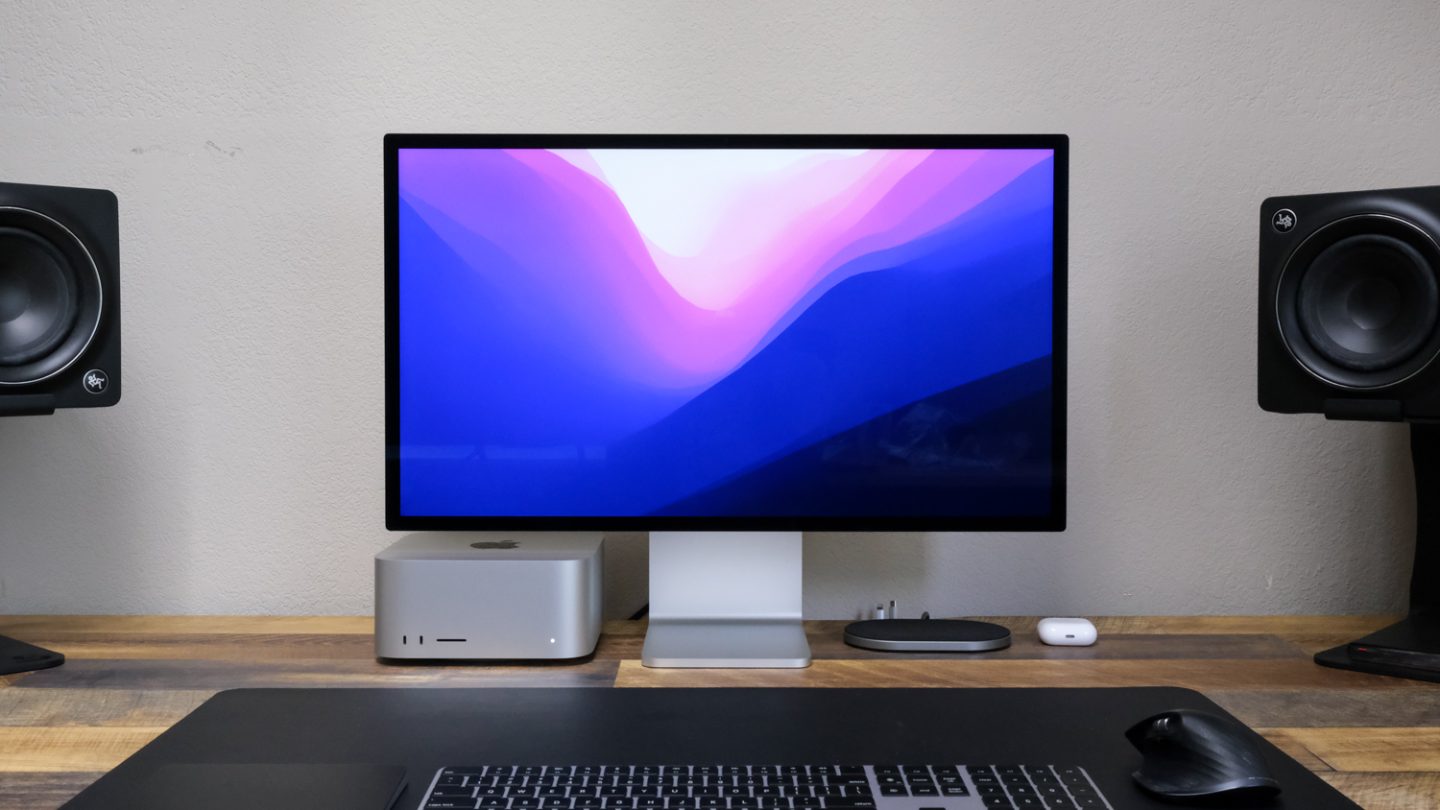 Apple has a tricky history with discrete computer displays — and it’s a little confusing as to why. The screens in its iPads and MacBooks are stunning, offering vibrant colors and in some cases, high-tech Mini LED backlighting. But those buying a separate display expect a little more from their screen. Apple’s latest attempt to address this is in the new Studio Display, which was released alongside the Mac Studio.

It’s only one of two displays in Apple’s lineup — the other being the $5,000+ Pro Display XDR. It borrows a few things from its more expensive sibling too, like the industrial design. And, at first glance, it would be easy to assume that it represents good value, given the fact that it has a webcam and halfway-decent speakers built into it.

Dig a little deeper, however, and you’ll find that the display doesn’t necessarily succeed as a monitor for the masses. It’s not a bad product, by any means, but it’s hard to justify the $1,600 price tag. The only problem? There aren’t really any great competitors. The external monitor market is ripe for disruption. But I’m not sure if the Studio Display is the disruptor.

The Studio Display is far from perfect, with a sub-par webcam and aging display tech — but it still offers a good image quality, excellent speakers, and a great microphone. 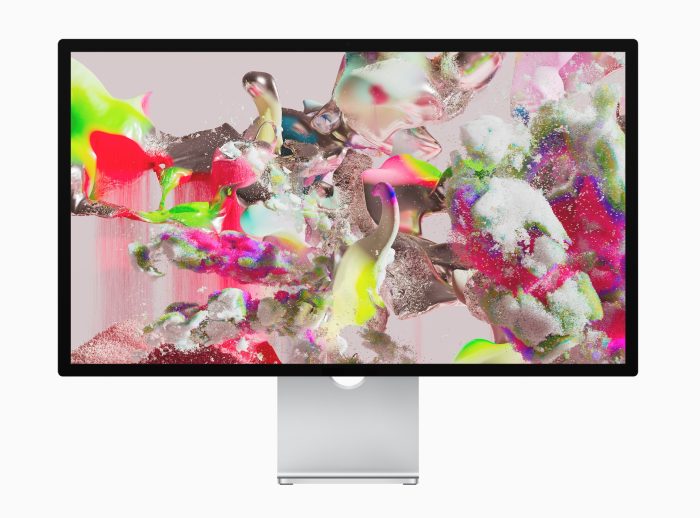 Monitors don’t necessarily have to offer a great design, given the fact that you’re mostly only looking at the screen itself. But I’d be lying if I didn’t appreciate having a well-designed monitor on my desk. I hate that most monitors are built from cheap plastic and the fact that the Studio Display helps change that is great news.

The display is built from Apple’s classic silver aluminum, with a medium-sized black bezel around the screen on the front. The main display part is around an inch thick, which is thicker than many other options. With the standard stand, you’ll dedicate 6.6 inches of depth to the monitor.

Stands and mounts are a bit of a sore point for this monitor. By default, the monitor comes with a tilt-adjustable stand, but if you want height-adjustability, you’ll need to pay an extra $400. You can swap the stand for a VESA mount at no extra cost, but it would have been nicer if the monitor could have had a removable stand and was compatible with VESA mounts out of the box, like most other monitors. After all, people change desk setups every now and then, and the lack of customizability means that you can’t really change your monitor setup.

The monitor serves as something of a hub too. On the back of the monitor, you’ll get one Thunderbolt 3 port for connecting the monitor to your computer with support for charging at up to 96W, but you’ll also get three USB-C ports that can be used to connect peripherals and other devices, at up to 10Gb per second. Considering I reviewed the Mac Studio at the same time as the Studio Display, I didn’t use this feature all that much — but it is nice to know that it’s there. Apple warns that the power cable on the back of the monitor is non-removable, however, it can be removed. It takes some effort, and the port is propriety, so you can’t really buy another cable for it.

With a metal build and a large 27-inch display size, the Studio Display is big and heavy. It weighs in at 16.9 pounds, which isn’t light compared to other monitors out there. But I’m happy to get a more premium design in exchange for a little more weight.

The actual screen on the Studio Display isn’t bad, but it’s a little underwhelming. At this price, you might expect Apple to include the Mini LED backlighting tech that it offers on the 12.9-inch iPad Pro, making for deeper black levels and higher contrast. Instead, however, you’ll get a traditional LED panel.

But it is a really good-looking traditional LED panel. The display has a 5K (5120 x 2880) resolution, which is double the 2560 x 1440 resolution on many monitors, meaning that your Mac won’t have to perform any special scaling tricks to fit the screen. It also means you’ll be able to get true 4K previews in video editing apps, without having to preview full-screen. The display supports up to a 600-nit brightness, along with the P3 color gamut.

The big thing missing? HDR support. Apple’s iPads, iPhones, and MacBook Pros all support HDR, but because of the fact that the display only has one screen-wide backlight, it can’t support the deeper black levels necessary for HDR. And, it tops out at 60Hz, so you won’t get the high refresh rates that you would want for smooth scrolling and gaming. 60Hz isn’t bad for a computer monitor, but it’s a pretty poor effort for a display in this price range.

The Studio Display is decidedly low-tech when it comes to the actual display. But it still gets bright and colorful, and the 5K resolution means that it’s crisp and detailed. For $1,600, you’ll find monitors with things like local dimming and higher refresh rates. But many don’t care about those things anyway.

The Apple Studio Display has a few tricks up its sleeve that theoretically put it ahead of the competition. Under the hood, the studio Display actually has a full-on A13 Bionic chip — the same chip that featured in the iPhone 11 series. The idea is that this chip will help the monitor’s webcam achieve the same image quality on offer by the iPhone, and help manage features like Center Stage.

But in the real world, I’m not so sure the A13 is actually connected to the webcam at all. The webcam in this monitor is poor at best, and I’m stumped as to why. It’s a 12-megapixel ultrawide camera, with support for the Center Stage tech

But while the camera should theoretically look great, in practice it grainy, and colors look washed out. That appears to be the case whatever the lighting situation, and whatever Mac it’s connected to. I used this monitor with both a Mac Studio and a 14-inch MacBook Pro, and the results were the same — a poor image.

This is hopefully something that Apple can fix through a software update, but until it does, if the concept of an all-in-one monitor appeals to you it might be worth waiting a little.

Center Stage, thankfully, works pretty well. At times it can feel a little slow, but in general, Center Stage did a great job at ensuring that my grainy face was always in-frame.

Lots of monitors have speakers built into them, but rarely do companies actually take the time and money to put decent speakers in there. Usually, monitors come with low-end, tinny-sounding speakers, that are really just there as a fall-back in case you don’t have anything else.

Not the Studio Display though.

The Studio Display, according to Apple, has better speakers than any other Apple computer. That’s a fairly high bar. The MacBook Pro offers excellent speakers for a laptop, making listening to music in the background a much better experience. That’s especially true given the improved bass response.

But indeed, the Studio Display takes the speakers to the next level. It has a total of six speakers built into it, including four woofers and two tweeters. Bass response is even better than the MacBook Pro, and there’s some detail and clarity to speak of. The speakers can get super loud too — far louder than most will want or need at their desk.

The speakers support Apple standards like Spatial Audio too, and while you won’t quite get the same experience as you will with a pair of AirPods, I was surprised how “spatial” the speakers built into a monitor could get.

The Studio Display isn’t just good at playing audio — it’s good at capturing it too. The monitor has three microphones built into it, and they’re easily good enough for all your video call needs. When you’re in a video call you can adjust the microphone mode to be either “Standard,” “Voice Isolation,” or “Wide Spectrum,” however it seems like only FaceTime supports this feature right now. Neither Apple’s own Voice Memos, nor Zoom supports changing microphone modes.

Like with the speakers, there are situations in which you’ll want a separate microphone. The mic in the Studio Display isn’t good enough for regular podcasting or live-streaming. But for everyone else, who will use the microphone for calls, it’s great.

It’s hard to know exactly what to make of the Apple Studio Display. It has a lot going for it, to be clear. It has excellent speakers, a great microphone, and a 5K resolution, which really matters for a lot of people. And, to be fair, the display does look good, if you can look past the lack of HDR and the lack of dimming technology.

But it is let down a little. Not only is there a lack of HDR and dimming tech, but it also inexplicably lacks a quality camera, and costs a hefty $1600. Depending on your needs, that could either be a decent price, or a little too expensive for what’s on offer.

If you’re in Apple’s ecosystem and like the idea of a do-it-all monitor and don’t mind the price, then this may be the way to go. Likewise, if you want excellently accurate color profiling, it’s a solid option. But you’ll have to be willing to look past the issues, and it may be worth waiting to find out if Apple improves the camera quality.

If you’re looking for a 5K monitor, it’s still worth considering the LG 27MD5KL-B, though you won’t get the same quality of speakers and microphone. It costs $300 less than the Apple Studio Display.

Should I buy the Apple Studio Display?

Yes, but only if you’re fine with the high price, the aging display tech, and the sub-par webcam.