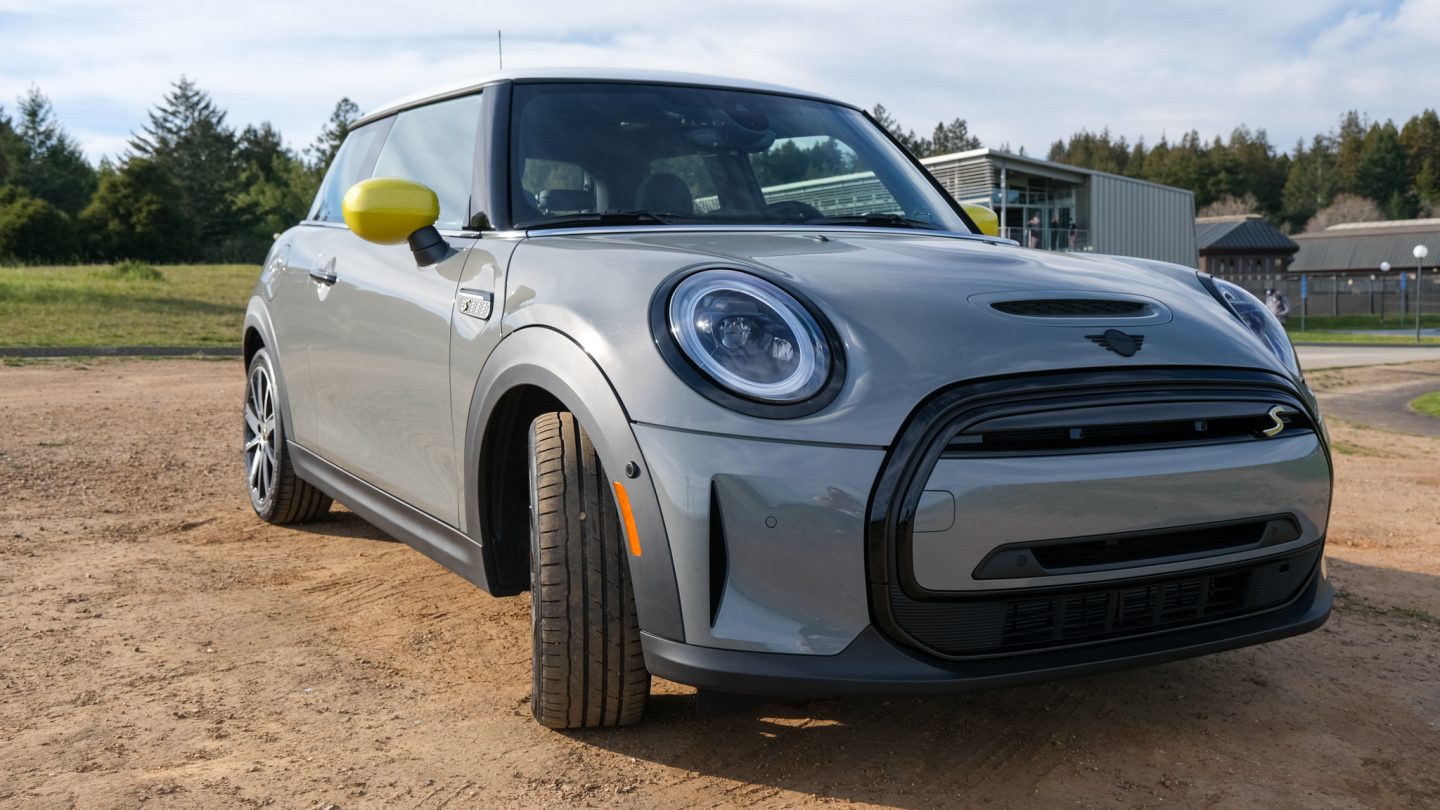 Eventually, all cars will be electric. As we head towards an electric future, some carmakers are building all-new models with futuristic designs, like Ford, with the Mustang Mach-E. Others, however, are opting to put electric motors in their existing cars — and in some cases, we’re glad. The 2022 Mini Cooper is available with an all-electric motor, and it combines some of the best things about Mini Coopers, and an electrified experience.

The electric Mini Cooper is both a ton of fun, and a bit of a niche option. It’s an absolute blast to drive — but you can’t drive it for long without a recharge. So who is this car for? That’s the question I’ve been trying to answer.

The electric Mini Cooper may not look all that different from other models, but it’s a whole lot of fun to drive, even if its range is a little limited. 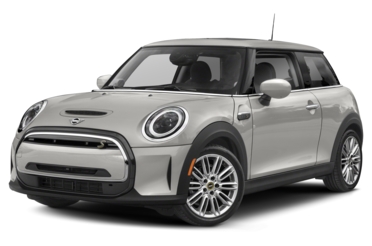 If you’re a fan of the overall look of the Mini Cooper, you’ll love the look of the electric model. It looks…just like a Mini Cooper, but a little refreshed. We’re reviewing the 2-door Mini Cooper hardtop, which is one of only two electric Mini Coopers available, the other being the Countryman. The 2022 model of the car gets the same exterior updates as the rest of the range. There’s a new front-end look with a larger grille and foglights that are now integrated with the main headlights. And, the car has a new contoured rear bumper that makes it look a little wider than it really is.

But the overall changes just give the car a bit of a refreshed look, and in general, the car looks just like the Mini you’ve come to know and love. It’s got the buggy headlights, the hatchback rear, and the quirky styling. Our model has a white top and yellow mirror caps, and I love the look. It’s unique and fun and fits the overall vibe of the Mini. And, the optional 17-inch Scissor Spoke wheels help give the car a sporty look, too.

The fun vibe extends to the interior of the car. Perhaps the biggest upgrade to the car’s interior is the fact that it sports a new 8.8-inch display, which is surrounded by an ambient lighting ring that can change colors. It’s not the only display in the car though — there’s also the 5.5-inch digital instrument cluster, which shows things like the driving range and battery level, along with everything else you would expect.

Unlike some electric cars out there, Mini has avoided ceding complete control of the car to the built-in screen, and I really like that. The controls on the Mini are well-designed and easy to use, and I love the switches that turn the car on and off and control things like regenerative braking. It can look a little cluttered at times, but it makes controlling the car more tactile and intuitive. Electric carmakers have some way to go before they figure out how to make controlling everything through a display easy.

The two-door model of the Mini Cooper is…small. As such, don’t expect a ton of space anywhere behind the driver’s seat. The passenger seats are small and cramped, and there’s little storage space at the back, except for perhaps a few groceries. It’s not really the purpose of this car, but if you are looking for something for the family or to really move stuff around, you’ll want to at least look at the four-door non-electric Mini, if not a different car altogether.

For the driver, however, the car is relatively comfortable. It’s built with premium materials, like a nice soft leather, and offers features like a heated steering wheel. Most of the front is plastic, but it doesn’t look or feel bad. The car has a USB-A and USB-C port, however, a wireless charging pad is only available as an option. I would have liked it standard.

The infotainment system on the Mini Cooper is relatively easy to get used to, but it’s not the most stable system out there. We ran into a few visual bugs, and found that the system worked a little slowly at times. It’s not that bad, especially given the fact that you don’t have to use the system to control things like the temperature. But ever now and then it can take a few seconds to respond.

Thankfully, you don’t necessarily have to use the car’s own infotainment, as it also supports Apple’s CarPlay, through a wireless connection. Unfortunately, it does not support Android Auto, which is a bit of a strange omission. I would have liked to see Android Auto compatibility.

Of course, like any other electric car, range and charging are an important consideration to make — and they’re also an area where the 2022 Mini Cooper falls a little flat. Why? Well, the car has a range of a rather unimpressive 110 miles. That’s less than half other electric cars out there.

For some, that won’t matter. Those that can charge at home and plan to only really use this car around town will be perfectly happy with the range, as the car will remain charged up all the time. But if you can’t charge at work, then you’ll find yourself having to charge as often as a few times per week, which can be a little annoying.

Thankfully, charging times aren’t too long. Because the car’s battery is relatively small, it doesn’t take too long to charge at a maximum charging speed of 50kW. According to Mini, the car can charge to 80% in 35 minutes. Alternatively, with a Level 1 home charger, you can charge it up in around four hours.

Then we get to the driving experience — and driving the 2022 electric Mini Cooper is an absolute blast. The car zips around town with ease, and the front-wheel-drive motor can produce 181 horsepower and 199 pound-feet of torque. The result? The car can sprint from 0 to 60 miles per hour in as little as around 6 seconds, which is faster than many other small electric cars out there, especially those in this price range. Couple that speed with the small size, and it’s almost a go-kart-like experience — in a good way. It’s a lot of fun.

The car offers two different regenerative braking modes — and they basically boil down to “on” and “off.” With one mode, you can essentially drive the car with one pedal, recapturing energy when you take your foot off the accelerator. The other mode makes the car feel almost like a non-EV. A mode in the middle might have been nice, but I tend to use heavy regenerative braking anyway, so I didn’t mind using it.

The steering on the car is relatively precise, and coupled with the great suspension, the car corners nice and tightly, without much lean.

While you might prefer to drive the car yourself, it does offer some driver-assist features to let you sit back and relax a bit. We have the Driver Assistance Package Plus, which includes adaptive cruise control that can retain a distance from the cars in front of you. The package also includes the Park Distance Control feature, which leverages sensors at the front, back, and sides to warn you when you’re getting too close, and there’s a lane departure warning too. For some, the Driver Assistance Package Plus might be worth the money, but others will prefer to keep full control of the car themselves.

The electric Mini Cooper SE is an absolute blast. If you’re interested in buying it, you’ll need to look past a few things — like the very low range, and the lack of storage space. But if you can look past those things, and are looking for a car to drive around town and charge at home, you’ll absolutely adore the Mini Cooper driving experience.

Perhaps the biggest competition in the small EV space comes from the Chevrolet Bolt EV, which has a much longer range. The but Bolt EV isn’t anywhere near as fun to drive, and if that matters to you then the Mini Cooper EV is the way to go.

Should I buy the 2022 Mini Cooper SE Hardtop electric?

Yes. The 2022 electric Mini Cooper is a ton of fun, and perfect for driving around town.