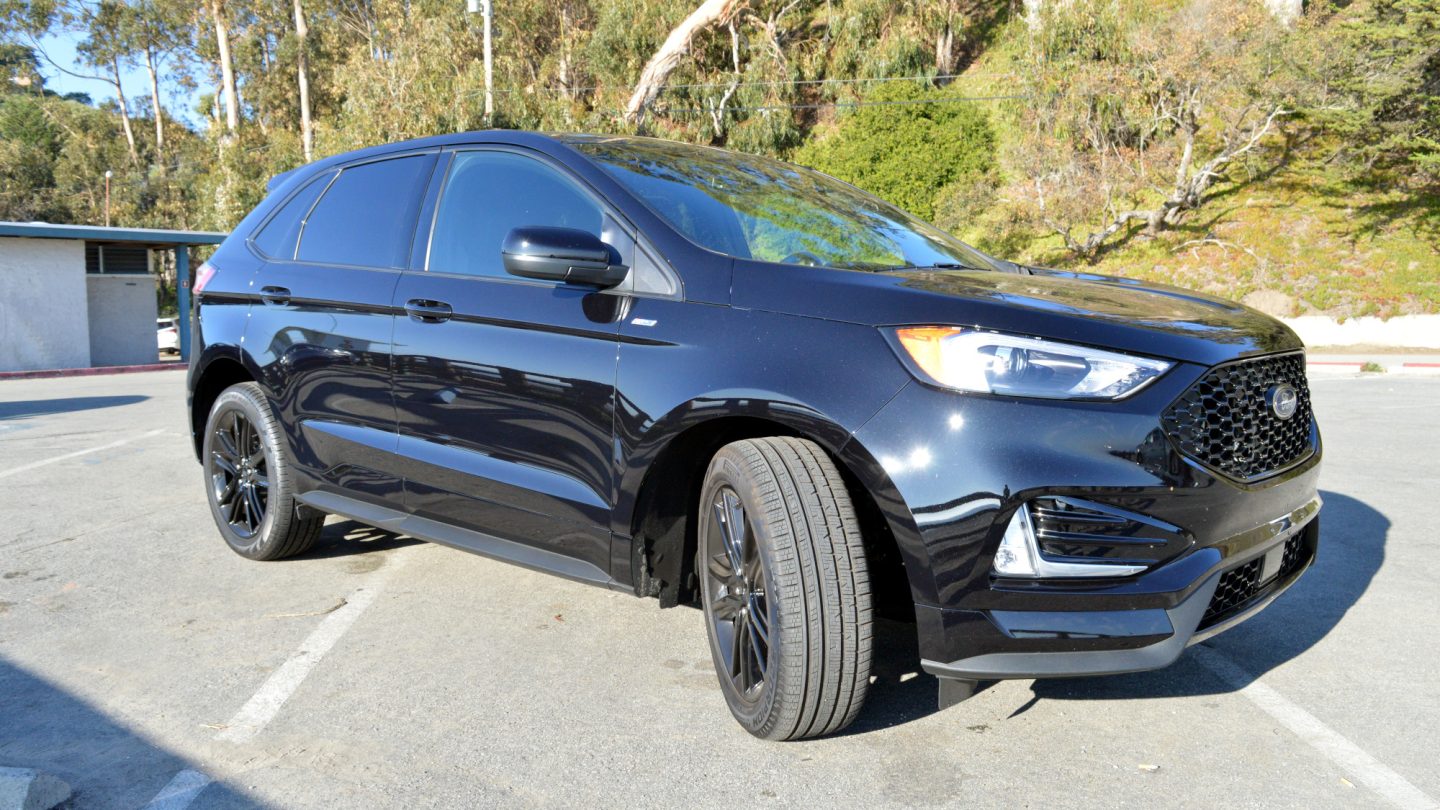 The Ford Mustang Mach-E was the 2021 Ford SUV that made all the headlines. But, of course, the Mach-E wasn’t the only new SUV from the company. Ford continued to update its other highly popular SUVs, including the Edge. And in fact, the 2021 Ford Edge ST-Line is actually a pretty interesting release.

The 2021 Ford Edge is interesting for a few reasons, and perhaps the biggest of those is the fact that it actually borrows quite a lot from the Mach-E. That’s good news — there was very little I disliked about the Mach-E in my review.

But is that enough? The Ford Edge has always been decent. But does it top the list of midsize SUVs? I’ve been driving the 2021 Ford Edge ST-Line for the past week to see just how well it performs.

The 2021 Ford Edge doesn’t necessarily look as trendy as the Mach-E, but it’s still generally stylish and well-designed. The Edge got an updated design in 2019, but the car still looks pretty similar to previous-generation models. You’ll get the new Edge grille on the front, which still looks solid, and on this trim, has a sport mesh finish that helps make it look a little more premium.

The Ford Edge ST-Line is available in a series of finishes, and we’re reviewing the Black model. It looks sleek and stylish, however, I’m generally a sucker for a deep black car in the first place.

The car in general offers a few touches that help give it a sporty feel. You’ve got a nice, extended roof spoiler, along with angular window shapes and a tinted glass. It still looks like a midsize SUV, and it’s admittedly not the most modern-looking car out there, but it’s not ugly by any stretch. If you upgrade from the base model, you’ll get more sportiness — like the larger 20-inch alloy wheels, which frankly look great.

The car is pretty wide, which is nice when it comes to interior spaciousness and driving stability — but takes some getting used to when it comes to parking. It’s not a huge deal — I got used to it within a few days.

Overall, the design of the 2021 Edge definitely looks and feels a little safe — but that’s not necessarily a bad thing. Sometimes you just want something that blends in. You will get a few sporty touches depending on the model you go for, but don’t expect a Mustang.

The interior of the Ford Edge ST-Line is where you’ll notice some bigger differences between this car and the previous generation. Notably, the 2021 Edge comes with a nice big 12-inch touch screen in the center console, which is where you’ll be able to interact with Ford’s Sync operating system.

The Ford Edge has a very spacious cabin, which is great. Despite the larger size, it’s still only a two-row car, so there’s plenty of room for drivers and passengers in both the front and the back. Rear passengers get 40.6 inches of legroom, which is very good.

Towards the front, apart from the aforementioned 12-inch touchscreen, you’ll get a rotary gear selector and other standard fare. The instrument cluster is semi-digital and can show mapping information, which is a nice touch. That includes being able to pull mapping information from CarPlay and Android Auto. There’s also a wireless charger, which is always nice.

There’s plenty of storage space in the trunk, measuring in at 39.2 cubic feet behind the rear seats. With the seats folded down, you’ll get up to 73.4 cubic feet, which is plenty for most.

The interior feels comfortable, and the majority of materials feel premium. The ST-Line offers suede-like accents, which helps improve on comfort too.

The big-screen experience helps make the Edge feel a whole lot modern than it did before. The car features Ford Sync 4A, which is the same software as that on the Mustang Mach-E. That’s generally good news.

Navigating Sync can be confusing at first but you will get used to it. Unlike on a car like the Mach-E, which is largely controlled through software, the Edge has more physical controls. As a result, fewer controls are located in the Edge’s software, and you’ll have fewer menus to navigate through when you want to control your car.

Even when you get used to Sync, you’ll still have to deal with the fact that it can be relatively slow at times. That’s a big deal — if there was ever a time when software should be responsive, it’s when you’re driving. Ford should work on this, because it was the same on the Mach-E.

Like any modern car, the 2021 Ford Edge ST-Line comes with a range of safety and driver-assist features. You’ll get basic features that you would expect in 2021, like blind-spot monitoring, a rear-view camera, and a lane-keeping system, along with more advanced features like automatic emergency braking, and auto high-beam headlamps.

It’s not the most technically advanced car out there, but most of these features really are helpful. The features are all included as part of Ford’s Co-Pilot 360, and at times, it can feel like you could take your hands off the wheel. With the lane-keeping system and cruise control enabled, I found myself rarely intervening when driving down the highway. Only the base SE does not get adaptive cruise control with stop and go features and lane centering.

The 2021 Ford Edge ST-Line comes with a 2.0-liter 4-cylinder engine, and it’s enough for most users, with enough power for the vast majority of use-cases. The more advanced ST comes with a 2.7-liter 6-cylinder engine, however, that’s not the model we reviewed so we can’t really speak to that extra oomph. FWD is standard on the entire Edge range except the ST, which has it by default, with AWD available as an option for the other models.

Generally, the car felt fine. It’s not the most engaging driving experience out there, but those planning on using the car for their daily commute or even for road trips will be perfectly happy. I did have a few complaints though. The transmission felt a little slow at times, but again, that’s something you’ll get used to.

The Ford Edge has an auto start/stop feature to help preserve gas. This is another feature to get used to, but the trade-off is worth it.

The 2021 Ford Edge is somewhat of a boring release, but that’s not necessarily a bad thing. The car isn’t aimed at those looking for a fancy electric car — it’s built for those who want a reliable midsize SUV with plenty of storage and enough performance for most situations. It’s competitively priced too.

While the 2021 Ford Edge is a competitive option, there’s some serious competition in the space. After all, it’s telling that Ford recently decided to solely focus on utility vehicles in the U.S. Notable alternatives include the Honda Passport, which is one of the best SUVs on the market. Ultimately customers should seriously consider the Honda Passport as an alternative.

Yes. The 2021 Ford Edge is a comfortable car with plenty of perks.