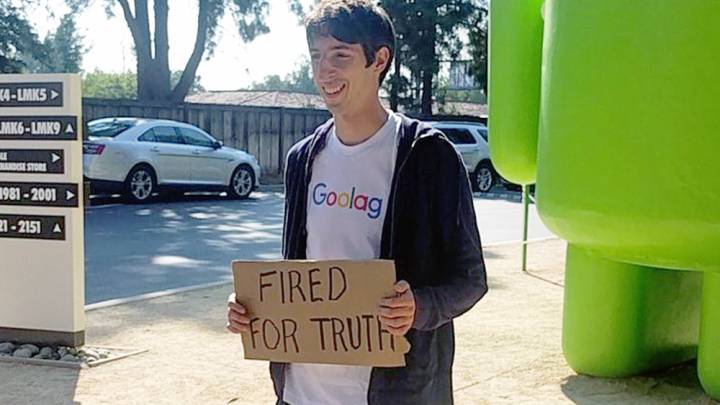 A week ago, nobody knew who James Damore was. Being an engineer at Google might be a solid gig, but it doesn’t exactly come with a whole lot of exposure. A 10-page memo he wrote explaining his views on diversity in the workplace — and more specifically, why he believes women aren’t a good fit for certain roles in the tech industry — raised more than a few eyebrows, but it still didn’t put his name in headlines. When Google swung the axe, however, that all changed, and now he’s the poster boy for the men’s rights movement.

The “Google memo,” as it’s been referred to ad nauseam, is a lengthy argument that Damore posted on an internal Google message board. In it, Damore attempts to explain why diversity in certain tech fields is hard to achieve, while also suggesting that some of the diversity initiatives within Google and in the industry in general are actually stunting the advancements made by the companies.

Taken at face value, there’s very little about the 10-page rant that is actually original. It’s almost entirely a retread of common themes frequently discussed by those who believe the dominance of men in tech is simply a result of human biology and “hard-wired” gender roles, with a healthy sprinkling of stereotypes for good measure.

Had the memo been posted on a forum or Facebook page, it would have gotten little attention, if any at all — but it wasn’t. It was posted on a discussion platform maintained by Google for employee use, and it spawned a debate that spilled over into social media channels. At that point, Google seemingly felt obligated to respond in some way, and did so by decrying the memo’s key points and firing Damore.

But rather than disappearing into the white noise of the often heated diversity discussion, Damore instantly became a celebrity. A week ago he was a Google engineer with some controversial views, and in the span of six days he’s become a men’s rights martyr, a fallen hero to those who view diversity initiatives as a culture war.

Damore’s memo and subsequent firing have been the hottest topics on several pro-men, anti-feminism subreddits such as r/TheRedPill and r/MensRights. Thousands of supporters have rallied around Damore and his message, while simultaneously casting shade on Google and the men and women who supported his firing. Topics like “What we should learn from James Damore,” treat the memo as gospel, deifying its author.

“I would ague that Mr. Damore’s memo was not ‘sexist’ but rather very logical and scientific,” one Reddit commenter says. “It simply did not sit well with the prevailing cultural elites at the company who believe there is no room for debating authoritarian policies which seek to use artificial quotas and policies to correct for alleged discrimination.”

Others are far less eloquent. “The man provides reasoning for why tech is mostly male-dominated. He gets fired,” one comment on r/MensRights reads. “The women get asshurt, prove his point, and skip work, and they’re let off free?”

Damore’s invitation to appear on the radio show hosted by popular anti-feminist speaker and YouTube personality Stefan Molyneux helped to galvanize his status within the men’s rights community. He’s been praised by Breitbart and championed by countless far-right and alt-right talking heads. A fundraiser to support the newly jobless engineer has already passed the $40,000 mark.

Google officially fired James Damore for perpetuating “harmful gender stereotypes in our workplace,” but in its attempt to put out the fire within its own walls, it has sparked a blaze that is already several times larger. For now, there’s no telling how long it will burn.