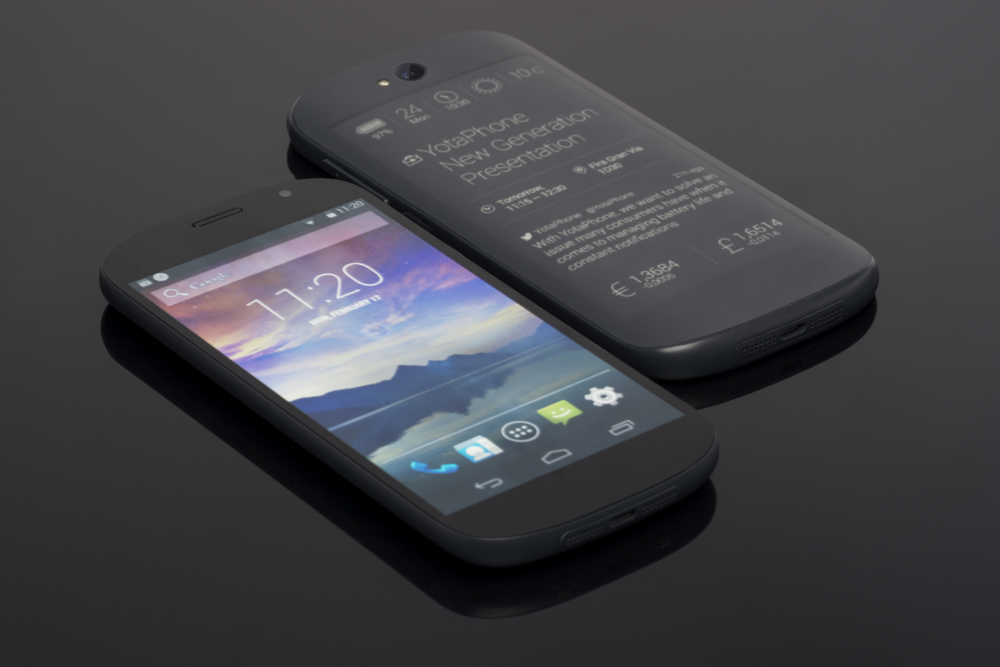 Just as rumored before the event, Yota unveiled its second-generation YotaPhone at MWC 2014, a device that packs two displays just like its predecessor. The YotaPhone 2 will offer bigger displays than the first model, with the secondary always-on e-ink display now offering full touch control. While the new YotaPhone 2 will let buyers use 74% of the phone’s surface as a display, the phone also offers other high-end specs.

“The future of smartphones is always-on displays allowing users without turning off the real world and disrupting the people around you,” Yota Devices CEO Vlad Martynov said. “The next generation YotaPhone takes this totally innovative concept in smartphones and makes it even better. Now, with two full-touch displays, the next generation YotaPhone is twice as smart, twice as useful and twice as beautiful,” explained Martynov.”

Users will be able to see notifications on the e-ink display and respond to mails and SMS messages without actually turning on the main color display. The phone will also ship with various apps specifically created to take advantage of the e-ink display on the back. When using the secondary display, which measures 4.7-inch and has a qHD (960 x 540) resolution, users will be able to get over 50 hours of battery life.

The YotaPhone 2 will be available in EMEA markets and Russia in the fourth quarter of the year, with a version for the U.S. and Asian markets to follow three to four months later. While the price of the device has not been announced yet, buyers of the first-gen YotaPhone will be able to upgrade to the new model “at a significant discount.”

A YotaPhone 2 image gallery and the full press release follow below.

NEXT GENERATION YOTAPHONE UNVEILED AT MWC

BARCELONA, SPAIN — Yota Devices, the company that innovated the world’s first dual-screen, always-on smartphone, unveiled the next generation YotaPhone today at Mobile World Congress (MWC). The next generation YotaPhone has full-touch control on its always-on electronic paper display (EPD) and many other new hardware and software features, making it even more intuitive and interactive.
“YotaPhone’s arrival on the market last year marked one of the first game changers in smartphones in many years. Yota Devices proved that there is an antidote to the always-dark smartphone screen,” said Yota Devices CEO Vlad Martynov.

“The future of smartphones is always-on displays allowing users without turning off the real world and disrupting the people around you. The next generation YotaPhone takes this totally innovative concept in smartphones and makes it even better. Now, with two full-touch displays, the next generation YotaPhone is twice as smart, twice as useful and twice as beautiful,” explained Martynov.

With two displays, users can choose how best to use their smartphone. They can watch videos, play games, view photos and browse the internet on a bigger, brighter and more brilliant 5.0” AMOLED display. On the energy-saving 4.7” EPD, they can open and respond to real-time notifications, read books and newspapers, keep track of meetings and post comments to social media. 74% of YotaPhone is usable, interactive display, compared to just 30-40% on other premium Android smartphones.

The next generation YotaPhone also comes with a Smart Power Mode so users can turn off the energy-consuming color screen and perform functions like making and answering phone calls on the always-on display to preserve battery life.

“The next generation YotaPhone is sleeker, thinner and even more beautiful,” said Martynov. “The sleek, soft and rounded body fits naturally and comfortably in your hand. We’ve taken a gorgeous phone and made it even more stunning.”

Yota Devices also announced today that it is opening YotaPhone’s SDK to third-party developers. Tools and information can be found at http://developer.yotaphone.com.

Yota Devices also unveiled several new apps at MWC, including Sportscaster, which allows users to track their favorite team, including play-by-play text commentary streamed in real time to the always-on display. Fitness Tracker syncs with any health monitoring device and tracks health status and fitness goals. Yota Devices also announced a partnership agreement with Israel-based Cellrox to include the company’s multi-persona technology on YotaPhone to provide functionality, privacy and security for both corporate and personal use. An agreement was also reached with MobiSystems to allow for reading of office docs on YotaPhone’s always-on display.

Yota Devices will continue its innovate and active engagement of users, early adopters, analysts and media in YotaPhone’s continuous development. “From the beginning, we realized that we had to do things differently, including building a direct dialogue with our fans and active users. The improvements in the next generation YotaPhone are directly the result of crowdsourcing. The Android community, along with our partners, suppliers and retailers, love our dual-screen, always-on concept and have many great suggestions for taking it to the next level,” explained Martynov.