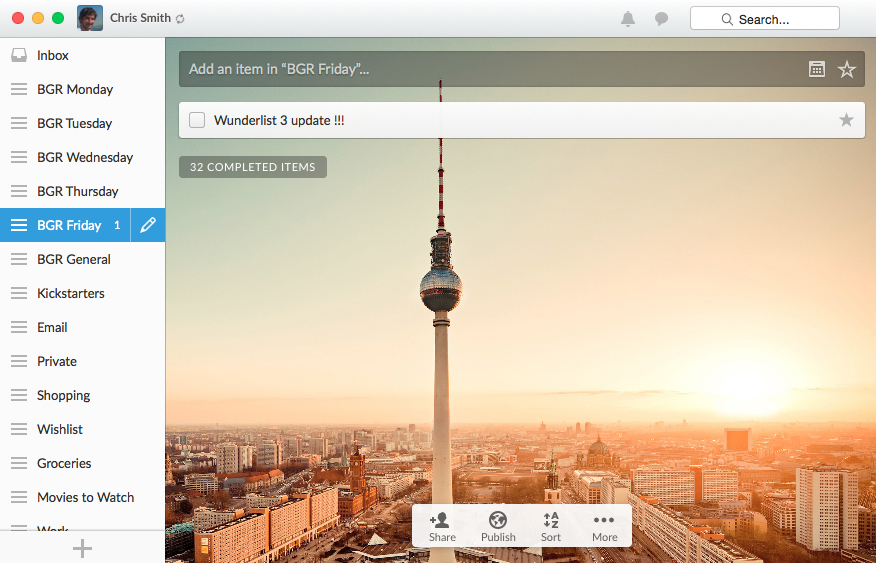 Wunderlist is a well-known to-do list app that’s available on iOS, Android, Mac, Chrome and the web, with developer 6Wunderkinder on Thursday announcing a major redesign and completely new features for the popular applications. The company also revealed that its app has more than 8 million users who have generated over 450 million lists since the app was first launched four years ago.

“Wunderlist has always been about enabling people to create and manage their lists,” 6Wunderkinder Founder and CEO Christian Reber said. “Now, with Wunderlist 3, we are introducing a platform, for all the world’s lists, where people can discover and benefit from the knowledge of others. Whether you share your grocery list with a loved one, or create a public list of your favorite restaurants in Paris, making and discovering lists has never been easier.”

Wunderlist 3 is “more than just an update,” featuring a brand new design [and] a completely re-engineered architecture, including a lightning-fast Real-time Sync and more than 60 improvements.”

The app is still available as a free download from corresponding app stores – with Windows 8 and Windows Phone 8 versions expected to arrive soon – but users will need a premium account for certain features.

Videos showing Wunderlist 3 in action, and the full press release follow below.

BERLIN, GERMANY — Thursday, 31 July 2014 — Today, 6Wunderkinder unveils the hugely anticipated Wunderlist 3. More than just an update, Wunderlist 3 is a huge leap forward for the much loved to-do list that will see the accelerated growth of the already existing 8 million users and the 450 million list items. Thanks to a brand new design, a completely re-engineered architecture, including a lightning-fast Real-time Sync and more than 60 improvements,Wunderlist 3 is geared for growth. What’s more, this update sees the arrival of Public Lists, a new way to create, discover and share lists online, ensuring Wunderlist is the home of all the world’s lists.

“Wunderlist has always been about enabling people to create and manage their lists. Now, with Wunderlist 3, we are introducing a platform, for all the world’s lists, where people can discover and benefit from the knowledge of others. Whether you share your grocery list with a loved one, or create a public list of your favorite restaurants in Paris, making and discovering lists has never been easier,” said Christian Reber, 6Wunderkinder Founder and CEO.

Public Lists enables people to share lists of all the things they love and know, to inspire, educate and influence the world around them. Whether people want to publish “The best packing list for a trip to Europe” on Twitter or embed “Top 10 horror movies of all time” in their blog, Wunderlist is the central place to create, manage and discover all the world’s lists. Once a list is public, it can be shared with the world through Twitter, Facebook, Google+, and messages or even be embedded into blogs and websites. People who discover a public list online can easily save the list to their own Wunderlist just by clicking the “Add to Wunderlist” button.

Wunderlist 3 also introduces a completely reengineered Real-time Sync that is now more powerful than ever before. The new Real-time Sync enables instant communication and collaboration with family, friends and colleagues around any shared list. Every list item, comment and update instantly appears right before your eyes across all devices, keeping your life in sync.

Overall, the new design direction keeps Wunderlist simple, consistent and fast on any device, now, and into the future. Wunderlist 3’s brand-new beautiful interface is more intuitive, lightweight and scalable than ever. The effortless interactions from Wunderlist’s new home screen, to creating lists or having instant conversations are where the new interface and Real-time sync harmoniously come into play.

Wunderlist 3 is now available for iPhone, iPad, Mac, Android, Kindle Fire, Chrome OS and the Web. Windows 8 and Windows Phone 8 will also be released soon. Wunderlist is available in 32 languages including Chinese, Japanese, Spanish and German so everyone can enjoy the beauty of keeping their life in sync.

To create your own Wunderlist 3 account please visit http://www.wunderlist.com