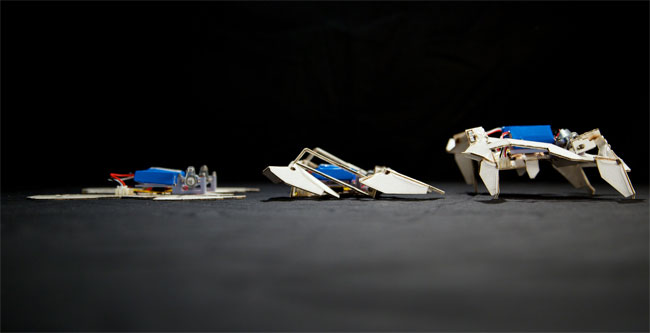 Who says Transformers will never be real? Researchers from Harvard and MIT have developed some incredible robots that are capable of folding themselves up until they’re nearly flat and then unfolding themselves into their full three-dimensional forms.

FROM EARLIER: You need to check out the 5 craziest robots in Google’s growing android army.

Harvard informs us that these incredible robots were designed using “little more than paper and Shrinky dinks — the classic children’s toy that shrinks when heated” to be ultra flexible and mobile. The researchers’ designs were inspired and influenced by biological processes such as the way amino acids work to mold proteins from flat structures into three-dimensional coils.

“Getting a robot to assemble itself autonomously and actually perform a function has been a milestone we’ve been chasing for many years,” explains Harvard School of Engineering and Applied Sciences (SEAS) professor Robert J. Wood.

The robot begins its fold when heat is applied to the Shrinky dinks that are embedded as part of the composite paper material used for the robots’ bodies. The researchers also designed the robots to fold easily back and forth much in the way that classic origami paper art does.

Be sure to check out the full incredible video of these robots in action below.