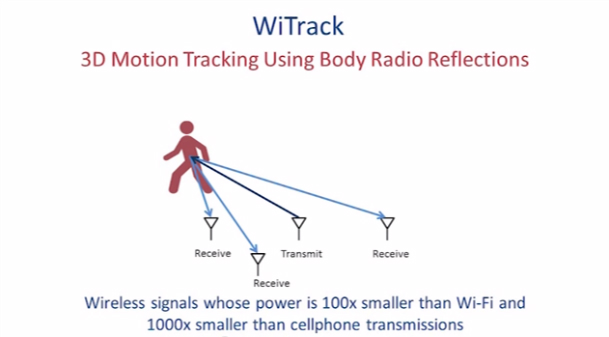 Researchers from the Massachusetts Institute of Technology (MIT) have come up with a radar-like 3D motion-tracking system that can spot body movement through walls, Engadget reported. Called WiTrack, the system uses wireless signals that are 100 times less powerful than usual Wi-Fi and 1,000 times less powerful than cellular signals, to track movement. Unlike similar technologies employed in some of the current gaming consoles that require the user to be in the same room with the tracking device or wear some sort of receiver, the WiTrack system works without such restrictions.

What WiTrack does is to bounce custom Wi-Fi signals off of the human body, even through objects, to map 2D or 3D movement. Just like radar, the system has a transmitter and receivers. The system can be placed behind a wall for example and still make wireless tracking of a person possible. As for commercial uses, the WiTrack system could be used in future video game consoles for a creating even more immersive gaming experiences, but also to control appliances and lights in a house, without actually having to go to a certain room to perform an action – see the following video for actual examples.

More interestingly, the system could detect falls and could be used to track older persons inside houses and potentially send out an alarm or distress signal in case they suffer any accidents. WiTrack apparently can track falls with an impressive 96.9% accuracy.

Ultimately, a WiTrack-like program could always be used to spy on individuals inside buildings from the distance, which is a more than plausible usage idea for the technology at a time more and more reports that detail extensive surveillance operations continue to emerge.

The researchers behind the WiTrack 3D motion-tracking technology will present their findings at next year’s Seattle-based Usenix Symposium on Networked Systems Design and Implementation (NSDI) taking place in early April.